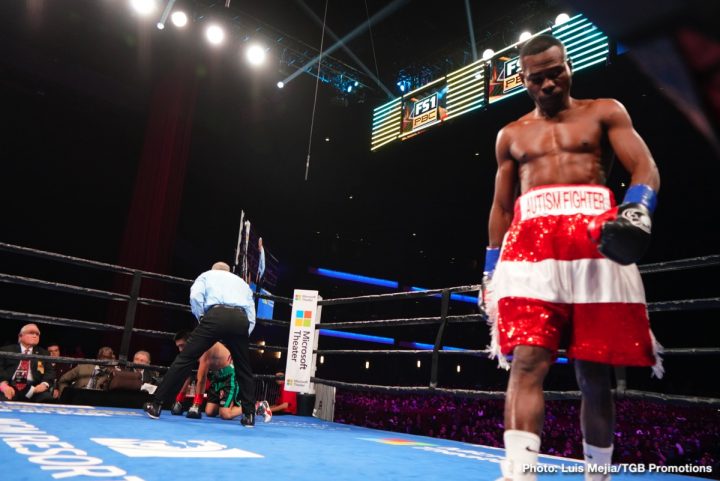 By Chris Williams: Former WBA/WBO super bantamweight champion Guillermo Rigondeaux (18-1, 12 KOs) looked sensational in stopping journeyman Giovanni Delgado (16-9, 9 KOs) by a first round knockout on Sunday night in his first fight in 13 months on Premier Boxing Champions (PBC) on FS1 at the Microsoft Theater in Los Angeles, California. This was a contest in the featherweight division.

The victory for Rigondeaux was his fifth career first round knockout. It’s hard to believe Rigondeaux has so many stoppages in the first round of his fights, since he’s not considered to be a big puncher. Obviously, Rigondeaux can punch with excellent power when he sits down on his shots the way he was doing tonight. Rigondeaux’s punch placement is so perfect, it enhances his power, and makes him more dangerous.

Delgado made it to the end of the first round when he was dropped hard by a big left hand to the head. Although the round had ended, referee Jack Reiss decided to stop it anyway at the count of nine. The official time of the stoppage was at 3:00 of round 1. Reiss was the referee that gave Tyson Fury a count when he appeared to be knocked out in the 12th round last month against WBC heavyweight champion Deontay Wilder on December 1.

With the win, Rigondeaux is in position to challenge some of the featherweight champions like Oscar Valdez, Josh Warrington, Leo Santa Cruz or Gary Russell Jr. The 38-year-old Rigondeaux’s best shot at getting a title fght would be against one of the Premier Boxing Champions fighters Russell Jr. or Santa Cruz. Rigondeaux is small for a featherweight, but it’s still worth it for him to fight in this division rather than going back down to super bantamweight. There are no interesting fights for Rigondeaux at 122. He can make better money challenging the likes of Santa Cruz or Russell Jr.

In Rigondeaux’s previous fight, he moved up two weight classes to challenge former WBO super featherweight champion Lomachenko in December 2017. That turned out to be a bad idea, as the two-time Olympic gold medalist didn’t possess the size to compete against the much heavier looking Lomachenko. Rigondeaux ended up suffering a hand injury, and was stopped in the 6th.

Light heavyweight prospect Ahmed Elbiali (18-1, 15 KOs) made easy work of 39-year-old Allan Green (33-6, 22 KOs) in stopping him in the third round of a scheduled 10 round fight. Green was knocked down three times by Elbiali in getting dropped in all three rounds. In the third, Elbiali nailed Green with a hard right hand that flattened him. Referee Sharon Sands then stopped the contest. The official time of the stoppage was at 1:16 of round three.

This was not supposed to be a competitive fight, so it wasn’t surprising that the 28-year-old Elbiali was able to destroy Green. This was just the second fight for Green in the last six years. He was out of boxing from 2013 to 2018, having retired.

The win for Elbiali was his second since being stopped in the 6th round by Jean Pascal in December 2017. 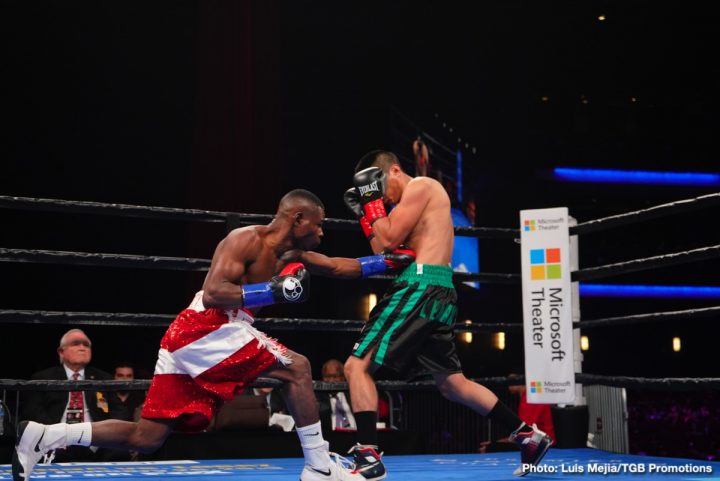 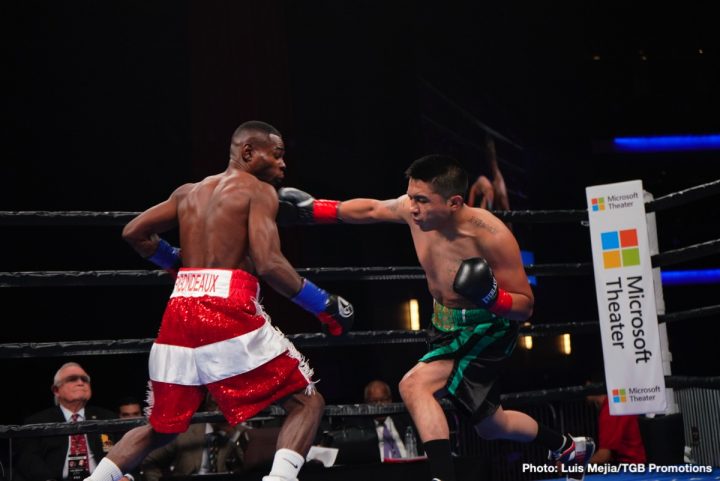 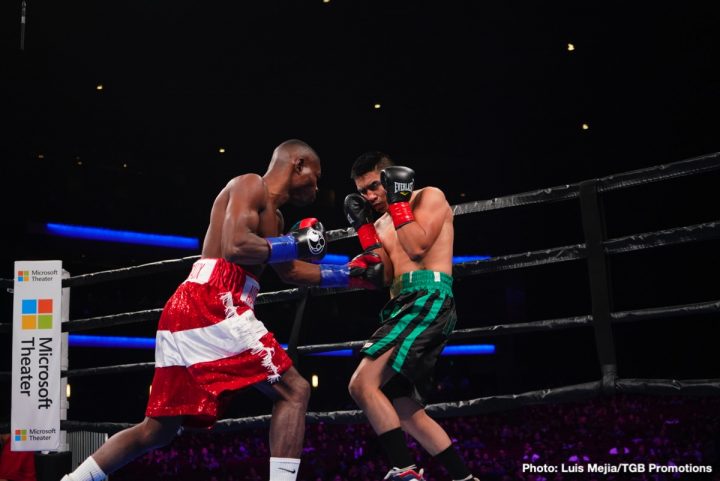 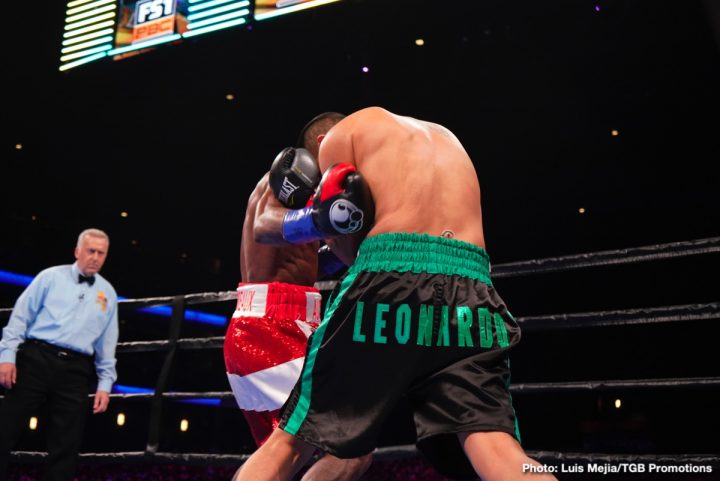 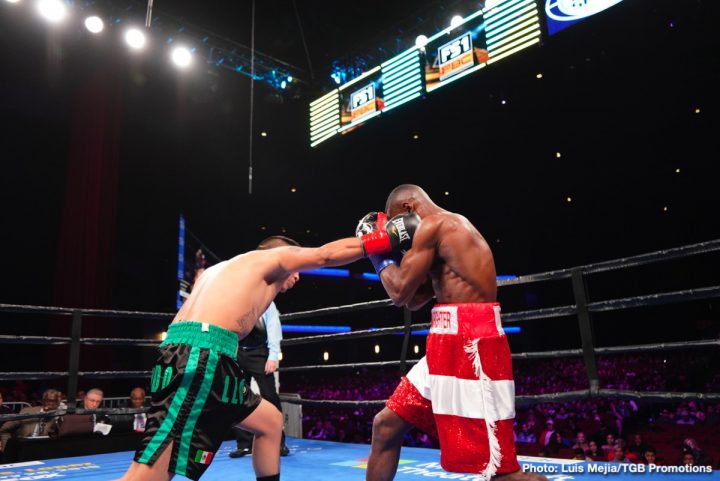 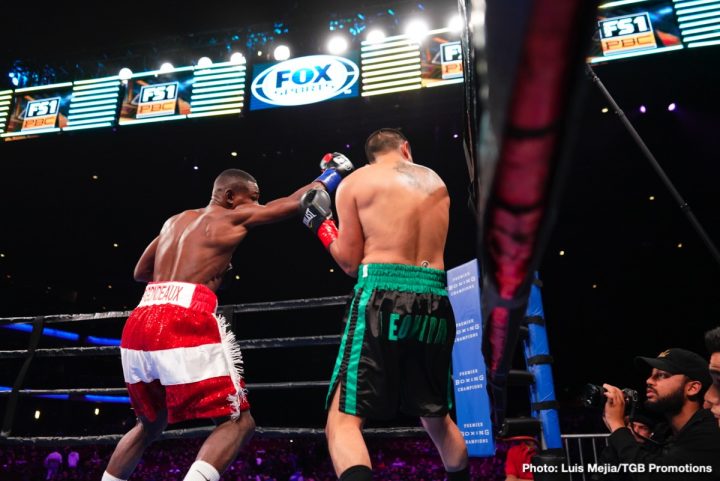 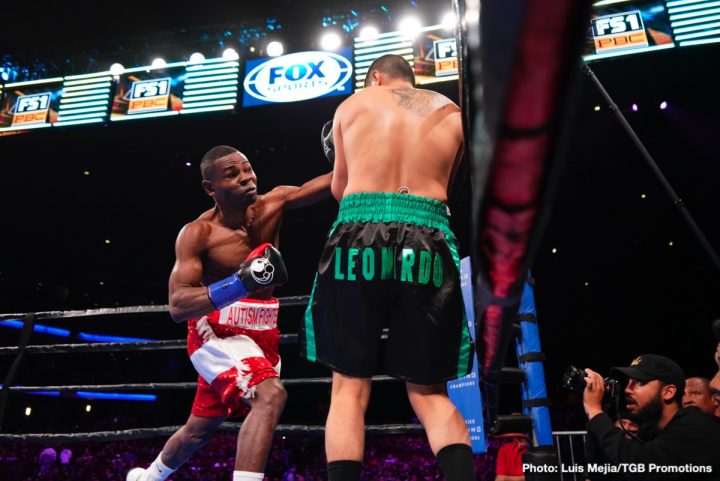 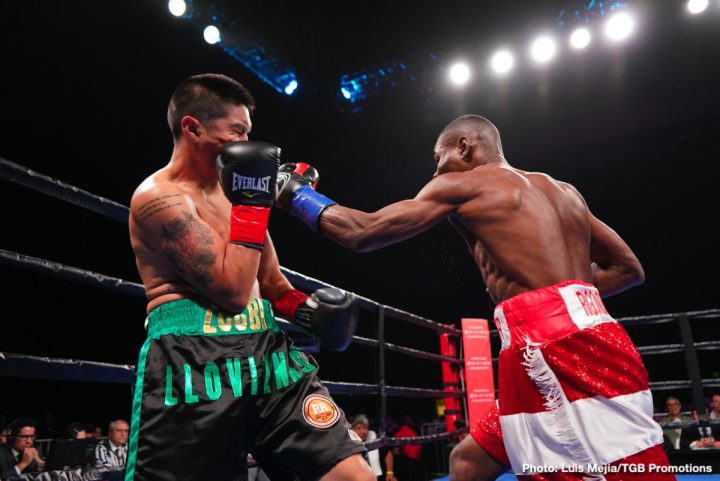 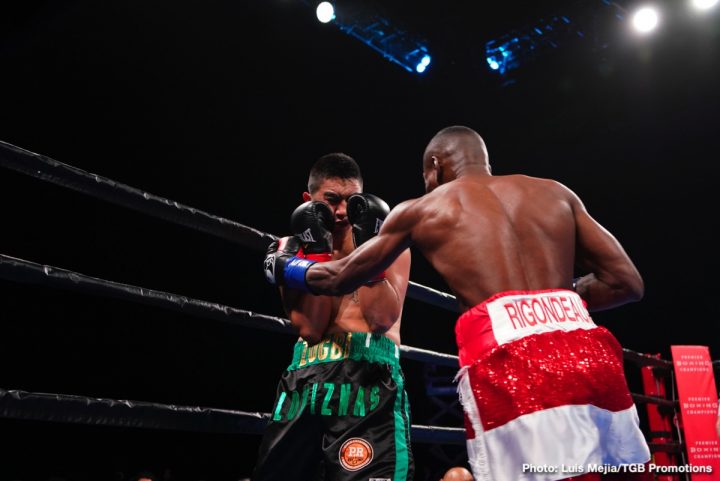 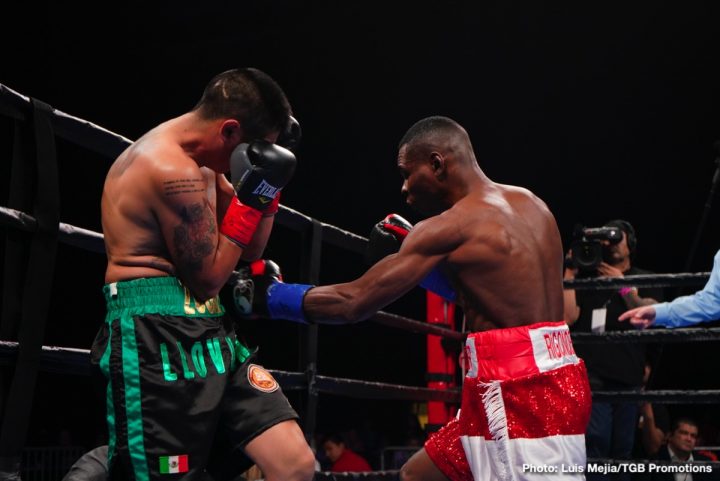 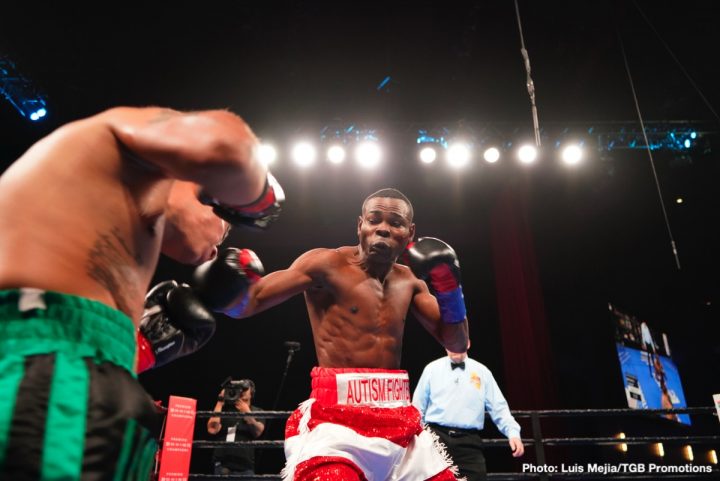 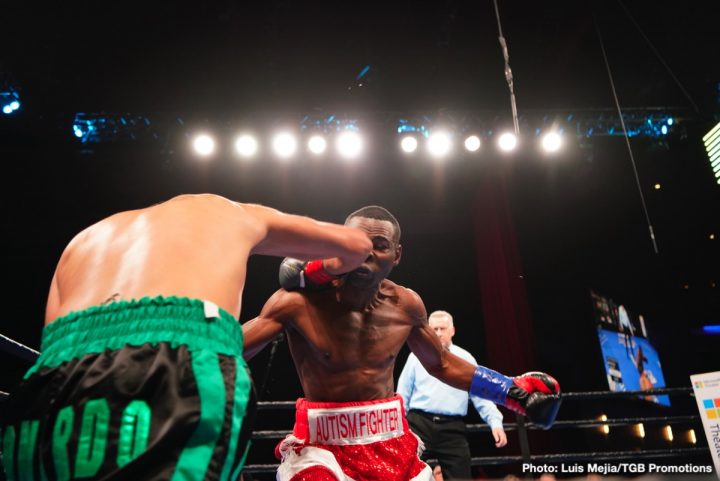 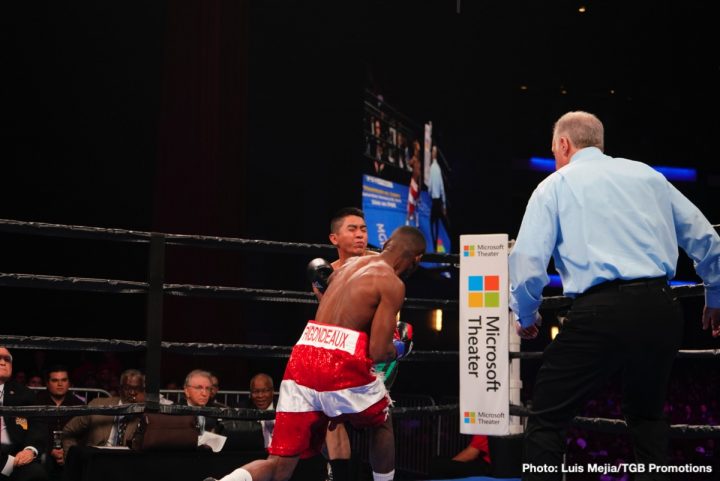 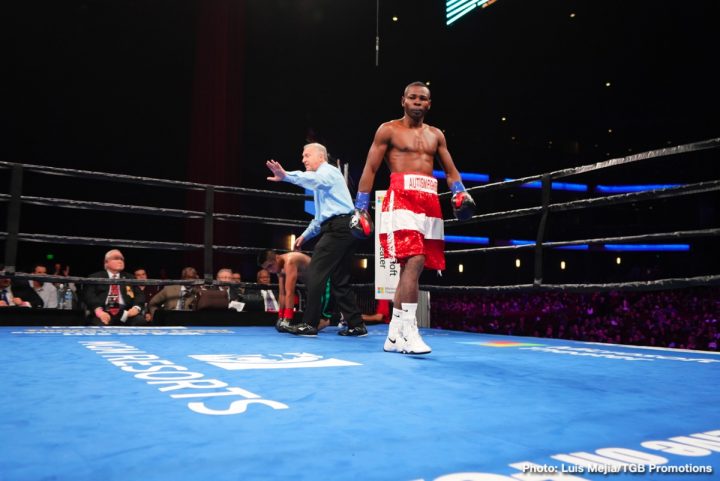 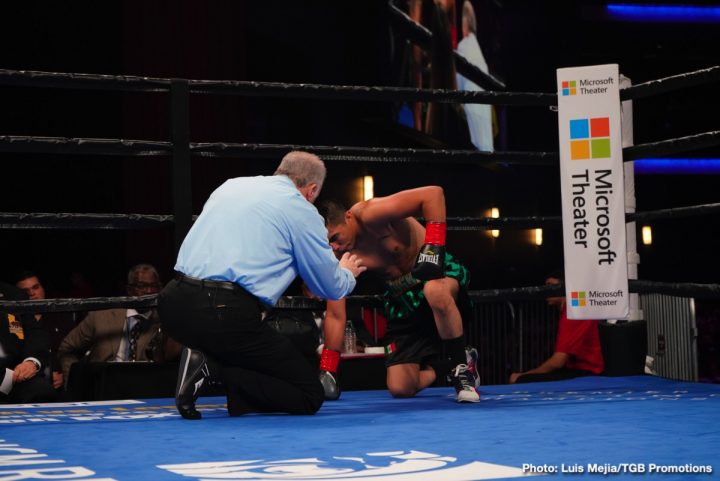 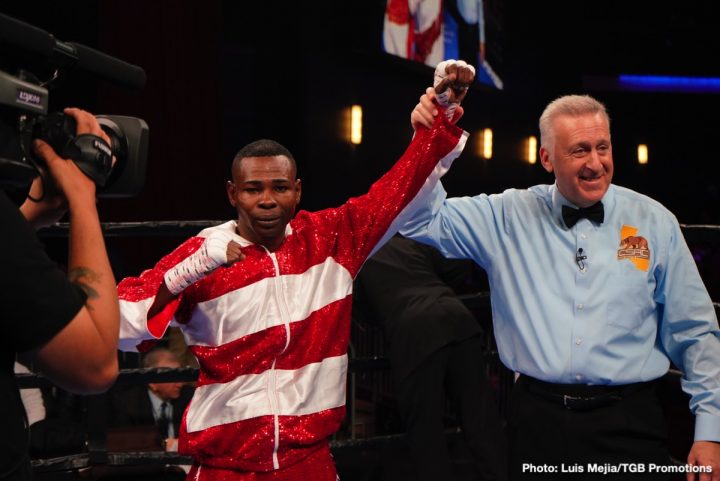