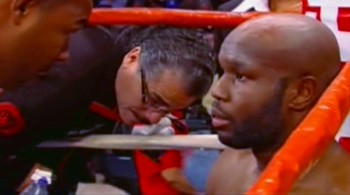 By Jim Dower: In a lackluster performance, cruiserweight contender Johnathon Banks (22-1, 15 KO’s) defeated heavyweight Javier Mora (22-5-1, 18 KO’s) by an eight round majority decision on the undercard of the World Boxing Council heavyweight championship match-up between champion Vitali Klitschko vs. Chris Arreola on Saturday night at the Staples Center, in Los Angeles, California.

The final judges’ scores were 78-74, 79-73 and 76-76. I had Banks winning the fight seven rounds to one. However, Banks fought passively much of the time, clinching constantly, throwing few punches each round and not fighting with any real intensity. This was a fighter that Banks, 28, should have been able to beat Mora without many problems.

However, Banks rarely threw more than two punches at a time and didn’t attack Mora with any real energy in the fight. It looked as if Banks was pacing himself because by the 4th round, he was already looking tired and his work rate had dropped off significantly.

In the first round rounds, Banks circled the ring throwing jabs and combinations. He didn’t sit down on his punches and looked to be just trying to connect to make contact. Mora, who looked a lot like Arreola in his physical build and fighting style, plodded slowly after Banks, trying to get him to engage for more than a few seconds. In each of the rounds, Banks was able to land one, sometimes two, good right hands. Mora had little luck landing more than a few shots during the entire rounds due to the movement from Banks.

Banks began to slow down by the 4th, looking tired and very weak. In the 5th, Banks opened up with a brief flurry of shots that caught Mora cleanly and had him holding on as the round ended. Banks looked good during that brief flurry and I couldn’t understand why he hadn’t let his hands go like that earlier in the fight because Mora was defenseless when he opened up like that.

In the 5th round, Banks went back to fighting at a snail’s pace, looking tired and very timid. Banks went on the control the 5th through 7th rounds by controlling the action with pot shots. However, he clinched constantly and really stunk up the place with his non-fighting. Mora constantly followed him around trying to get Banks to stop running but it was no use. Banks stayed on his bicycle through the 8th round. In the 8th round, Banks continued to clinch and land infrequent shots that looked very weak.

All in all, I thought Banks looked nothing short of terrible. He’s currently ranked number #8 in the IBF and #12 WBC. I don’t see him as a championship caliber fighter at this point in his career. He may be ranked in the top 10, but I see a lot of other cruiserweights with more talent and intensity than Banks has going for him.

Undefeated lightweight prospect John Molina (18-0, 14 KO’s) destroyed journeyman Efren Hinojosa (30-7-1, 17 KO’s) in 34 seconds of the 1st round. Molina, 26, a knockout artist, rushed across the ring at the start of the fight and nailed him with a couple of right hands to the head and then a right to the body that hurt the 37-year-old Hinojosa, doubling him over. Molina then added a right that grazed the back of Hinojosa’s head and then a short left uppercut that put Hinojosa down on the canvas where he sat on a knee in pain from the earlier body shot. Referee Tony Crebs then stopped the bout at 0:34 of the 1st.

In a battle of aging heavyweights, once beaten 40-year-old Cedric Boswell (31-1, 24 KO’s) defeated 38-year-old journeyman Cisse Salif (23-16-2, 21 KO’s) by an eight round unanimous decision. The final judges’ scores were 80-72, 80-72 and 80-72. The bout seemed more like a sparring session that an actual fight because Salif rarely threw any punches and did little other than follow after Boswell, taking shots and urging him to keep punching. Boswell, who sports a very impressive record filled with nothing but B, C and D level fighters, had his way with Salif in the fight and nailed him with pretty much everything in his arsenal during the eight round fight.

However, Boswell’s lack of power kept Salif on his feet and he had to be content with winning by a lopsided decision. Every round was the exact same with Boswell landing combinations, jabs and Salif just soaking up the punishment. On very rare occasions, Salif would land a jab and sometimes a right hand, but mostly he just plodded forward and took shots. He came into the bout at 269, but looked in pretty good shape for the amount of weight that he had on him, much better than Arreola.

Boswell was supposed to fight Alexander Ustinov. However, Ustinov ran into visa problems and was unable to make it into the United States to take the fight. That’s too bad because it would have been interesting to see how Ustinov would have done against Boswell. The way that Boswell looked on Saturday night, I think he might have been good enough to beat Ustinov.


« Are biased sportswriters hindering America’s up and coming boxers?

Klitschko: “He [Arreola] Will be Heavyweight Champion” »