James DeGale to fight on Sept.30 on Ortiz-Molina card 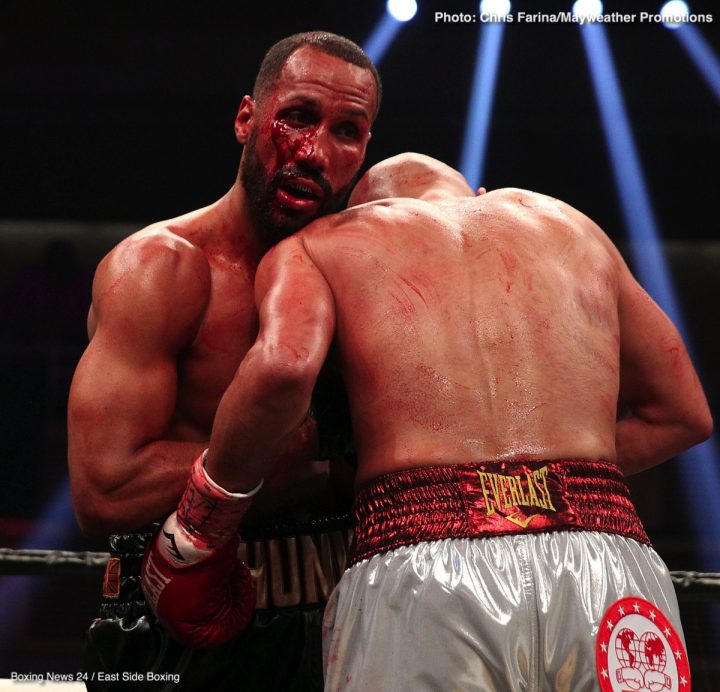 By Scott Gilfoid: James ‘Chunky’ DeGale will be fighting this month on September 30 in an eight round fight against a still to be determined on the undercard of former welterweight champion Jessie Vargas vs. John Molina Jr. at the Citizens Bank Arena in Ontario, California. DeGale, 32, says he as a “juicy” lined up for December.

DeGale vacated his International Boxing Federation super middleweight title on July 4 after the IBF ordered him to defend it against mandatory Jose Uzcategui. The excuse at the time for DeGale not defending his IBF belt against the talented Uzcategui was he was going to be fighting bigger fights. As you can see, DeGale (24-2-1, 14 KOs) is going to be taking a lower level eight-round bout for his next fight on September the 30th. I guess you can forget about DeGale fighting someone talented in his next contest.

I’m boxing in a 8 rounder September 30th in L.A on the #OrtizvsMolina bill… when I get through that iv got something nice and juicy for you in December 💪🏽👊🏽

DeGale will once again be on the road for his September 30 fight. Oddly enough, it’s been the norm for DeGale to be fighting on the road since 2015. It’s hard to believe that the 2008 Olympic gold medalist hasn’t created a huge fan base in the UK like 2012 Olympic gold medalist Anthony Joshua. DeGale’s gold medal victory in the Olympics wasn’t controversial like Joshua’s, who won several fights during the 2012 Olympics by questionable decisions.

It’s anyone’s guess who DeGale will be fighting on September 30. I hate to say it but don’t expect much, as DeGale has been looking worse than awful lately since going through a grueling 12-round war with Badou Jack last year in January 2017. DeGale hasn’t looked the same since that fight in losing to former #15 IBF fringe contender Caleb Truax by a 12 round majority decision in their first fight last year in December, and then beating him by a questionable 12 round unanimous decision in the rematch last April. DeGale looked completely shot, and spent much of the fight clinching and running from Truax. It was all DeGale could do to land a few shots in each round. It was literally 12 rounds of UGLY spoiling from DeGale, and you can argue that it was a crime that he had his hand raised at the end of the fight. I hope for DeGale’s sake that his management don’t select a 2nd tier fighter that is a little too good, because I could see him losing to a decent journeyman level fighter. I don’t think it would even take a good journeyman to beat DeGale at this stage of his career. He looks like he has nothing left at all. The speed, power and work rate are all gone from DeGale’s game since his fight with Jack in 2017. Even DeGale’s mobility appears to be impaired. DeGale no longer moves well, and he does lots of holding. As far as I can tell, DeGale’s holding ability is the only thing that he has left of his game. He looks totally shot.

As far as DeGale’s ‘big’ December fight goes, WBA ‘regular’ super middleweight champion Rocky Fielding and Chris Eubank Jr. are rumored possibilities for him. The fight that would make DeGale good money would be if George Groves beats Callum Smith in the World Boxing Super Series final and then faces him. Groves is facing Smith this month in 11 days from now on September 28 in Jeddah, Saudi Arabia. DeGale lost to Groves by a close 12 round majority decision earlier in his career in 2011. There was a time where DeGale might have had a chance of beating Groves since then, but not now. Groves looks like he’s fighting on another level than DeGale. You never know though. Groves is coming off of shoulder surgery on his left shoulder from his semifinal fight against Chris Eubank Jr. last February. There’s a possibility that Groves won’t be the same fighter he once was. I don’t know if that really matters. DeGale vs. Groves 2 would arguably be a cash out fight for James, as I expect him to lose that fight badly even if George is fighting with just one good arm. The payday DeGale could get fighting Groves in a rematch would give him a nice golden parachute to help him through his retirement years. For DeGale to make the Groves fight a realistic option, he’s going to need to shine in his September 30 and December fights in winning both. I don’t see Groves wasting his time fighting DeGale if he loses or looks horrible in his next two bouts.

Victor Ortiz (32-6-3, 25 KOs) will be trying to keep his sagging career alive with a 12 round fight against the capable John Molina Jr. (30-7, 24 KOs). Both of these guys have seen better days, but the 35-year-old Molina appears to have a lot more left in his tank than Ortiz. Molina Jr. is coming off of an impressive 4th round knockout win over Ivan Redkach last December in a fight at welterweight. Before that, Molina was stopped in the 8th round by former WBC/WBO light welterweight champion Terence Crawford in December 2016. Molina hasn’t been as active with his career as he should in the last two years. Molina fought just once in 2017 and not at all in 2018. If Molina makes it to the ring for his fight with Ortiz this month on September 30, it’s likely going to be his only fight for 2018. It’s a waste to see Molina not getting the most out of what’s left of his boxing career. Ortiz, 31, was held to a 12 round draw in his last fight against former two division world champion Devon Alexander last December. A lot of boxing fans thought Ortiz did enough to deserve the decision. The fact that the fight was close enough for the judges to score it a draw shows that Ortiz has not improved much since his stoppage losses to Andre Berto, Josesito Lopez, Marcos Maidana, Luis Collazo and Floyd Mayweather Jr. Ortiz has good punching power, speed and talent, but when he’s met any kind of stiff adversity, he crumbles and ends up getting stopped.


« Frampton, Conlan & Barnes weigh in on why Belfast is boxing capital of Europe