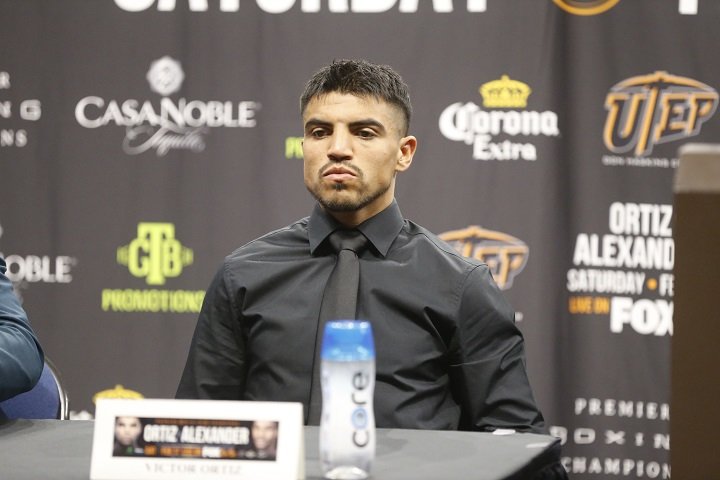 By Jim Dower: Former WBC welterweight champion Victor Ortiz has been charged with sexual assault of multiple accounts, according to vcstar. Ortiz, 31, has reportedly turned himself in to the Oxnard Police department. Ortiz’s bail is said to be $100,000. If Ortiz is found guilty of the charges against him, he could wind up in prison.

The talented southpaw Ortiz (32-6-3, 25 KOs) is scheduled to fight this Sunday, September 30 against Molina Jr. on Premier Boxing Champions on FS1 at the Citizens Business Bank Arena in Ontario, California.

Ortiz was charged last Monday by the Ventura County District Attorney’s office. Ortiz was charged with three felony assault charges. One of the charges is forcible rape. The charges are for an assault that allegedly took place on March 19. The police were notified then on the same date. It’s unclear whether Ortiz knew his alleged victim.

On Tuesday, Ortiz turned himself into the Ventura County Sheriff’s Office, according to vcstar.

Ortiz’ once promising boxing career has been deteriorating since his 4th round knockout loss to Floyd Mayweather Jr. The fight was a strange one in which Ortiz head-butted Mayweather out of what appeared to be a frustration due to him getting worked over during the round. The referee Joe Cortez stopped the action and penalized Ortiz one point for the foul. Ortiz then apologized twice to Mayweather in hugging him. Immediately after the referee told the fighters to resume fighting, Ortiz hugged Mayweather one more time. While pulling back from the embrace, Ortiz was hit twice by Mayweather in a surprise move. The shots flattened the unprepared Ortiz and he was then counted out. After that fight, Ortiz later lost to Josesito Lopez, Luis Collazo and Andre Berto. Ortiz recently fought to a 12 round draw against Devon Alexander in a fight that many boxing fans thought he should have won. Aside from some stamina and issues with his leaky defense, Ortiz looked good in the fight with Alexander. Ortiz woul d still give a lot of fighters problems in the welterweight division. If Ortiz winds up in prison for the alleged sexual assault, it could finish his boxing career.

Ortiz defeated Andre Berto by a 12 round unanimous decision to win the WBC welterweight title in an exciting fight in April 2011. Both fighters hit the deck in the match. Ortiz was down in rounds 2 and 6.