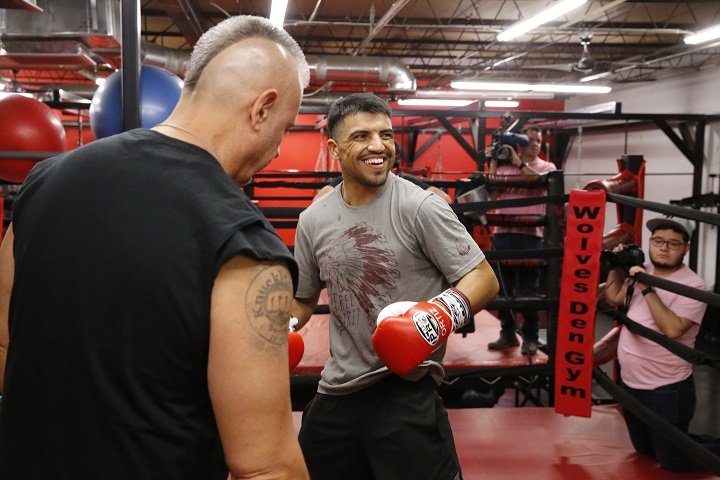 This is a fight that could lead to former World Boxing Council 147 pound champion Ortiz (32-6-3, 25 KOs) getting a world title shot against one of the champion in the welterweight division. As many problems the 31-year Ortiz has had in the last seven years of his career, it’s hard to see him getting another fight for a world title, but there’s a very real chance that he can if he can beat Molina Jr. (30-7, 24 KOs).

Ortiz-Molina will be televised on September 30 on Premier Boxing Champions on Fox Sports 1/Fox Deportes at 9:00 p.m. ET/6:00 p.m. PT. The two fighters are nearing the end of the road, but they’re still well recognized by the casual and hardcore boxing fans. That’s why they keep getting opportunities over and over. Unfortunately, neither of them has been able to take advantage of the chances they’ve been getting by winning world titles in recent years.

In his last fight, Ortiz fought to a 12 round draw against former 2-division world champ Devon Alexander earlier this year on February 17 in El Paso, Texas. It was a subjective thing in deciding who he better fighter was of the two. While some boxing fans thought that Alexander deserved the victory, a lot still saw Ortiz doing the better work due to the way that he came on strong in the second half of the fight with his power punching.

Ortiz has suffered losses to the following fighters since 2011:

Those aren’t a lot of losses for Ortiz, but he’s also not been very busy with his career since 2012. Ortiz has fought precisely seven times in the last six years. That’s a little over one fight per year in 6 years. Since losing to Mayweather in 2011, Ortiz has been a part-time fighter. Granted, he got a lot of money for the Mayweather fight, so it’s logical for him to fight less than hungrier fighters that haven’t made the big money. However, Ortiz could have accomplished a lot more with his boxing career in the last half decade if he had fought 2 to 3 times per years instead of just once per year.

Ortiz had been hoping to face Brandon ‘Bam Bam’ Rios in a fight that would have attracted a lot of interest, but unfortunately the fight negotiations failed to produce a fight much to the disappointment to fans. Rather than the 32-year-old Rios, Ortiz will now be fighting Molina Jr. It’s not the fight that the people wanted to see, but it’s still a similar level opponent. Like Rios, Molina Jr. is a journeyman level fighter heading towards the end of his career. Molina at least is coming off of an impressive 4th round knockout win over Ivan Redkach last December. Molina also has impressive wins over former light welterweight champion Ruslan Provodnikov and Jorge Romero in the last three years. Molina’s losses

“We’ve known each other a long time and we’re both always in exciting battles, so fans should expect nothing less on Sept. 30,” Ortiz said via ESPN about his fight with Molina. “I had a broken eye socket from an injury in the second round of the Alexander fight, but I’m feeling 100 percent now. I’m ready to take what is rightfully mine, and that’s another world title down the road. It’s going to be (bombs) away from Round 1, and I can’t wait.”

Ortiz has had problems in his career when facing guys with power and wiliness to apply pressure against. Some boxing fans feel that Ortiz quit against Floyd Mayweather Jr., Lamont Peterson, Josesito Lopez and Marcos Maidana. Ortiz beat Berto in their first fight in 2011. But other than that win, Ortiz has never beaten anyone good.

At this point, you have to say that Ortiz vs. Molina Jr. is a 50-50 fight. Both guys have the kind of world class power that can end the fight at a moment’s notice. This fight could come down to which of them has more heart. Molina Jr. has shown the kind of toughness in his fights that would indicate that he’ll have too much heart for Ortiz to deal with on September 30.

Fury vs. Wilder: Why the timing is perfect for both men to collide – The view from the Fury side »