Is Hatton still bitter About Being Destroyed by Mayweather? 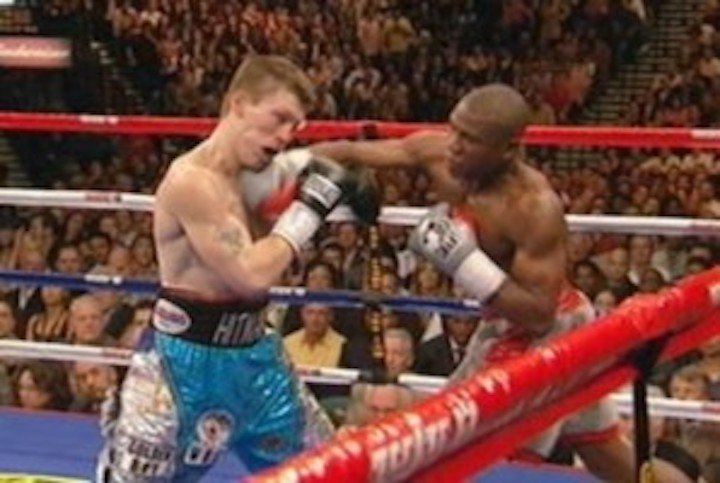 By Scott Gilfoid: Recently, Ricky Hatton fired off a broadside attack on Floyd Mayweather commenting how Mayweather can’t sell tickets. What Hatton was referring to was Mayweather’s September 19th bout against lightweight Juan Manuel Marquez, a fight which has thus far gained very little attention in the boxing media.

Although the bout may end up getting a lot of pay-per-view buys once the casual boxing fans have seen the Mayweather-Marquez HBO 24/7 series that will be starting soon, but Hatton does seem to have a point that Mayweather’s bout doesn’t appear to be in the process of being a huge seller.

What Hatton said was pretty much unnecessary, because most hardcore boxing fans can already see that it was a poor decision on Mayweather’s part to take a fight against an opponent as small as Marquez. Mayweather might have gotten a free pass had he fought an opponent a division below his welterweight fighting class, say a fighter like Timothy Bradley.

But to take on a Marquez, 35, who only recently moved up to the lightweight division within the past year, it looks bad on Mayweather’s part, like he’s looking for a fighter small enough for him to beat without too many problems. What makes Hatton seem bitter is that he felt the need to make the comment in the first place, because it seems like kicking a dog while he’s down.

Obviously, Mayweather is having problems here by his poor choice of an opponent and didn’t need someone like Hatton to pour it on and kick sand in his face while he’s already looking at a fight that will be doing poorly with the PPV audience.

Hatton, if he was completely mentally recovered from his 10th round beating at the hands of Mayweather, should be thinking of other things rather than wasting his time taking shots at Mayweather during his time of troubles. Did the loss to Mayweather hurt Hatton’s mental psyche that much that he still has to get back at Mayweather? I had a feeling that Hatton might be messed up mentally by the Mayweather fight even before it happened.

After the bout, Hatton revealed that he was emotionally upset about the loss, talking about crying a lot about the defeat. Instead of sitting down like a boxing scientist and studying what he did wrong, Hatton let his emotions get the best of him and moped about the defeat. I realized early on that Hatton was more of a primitive slugger type of fighter with average boxing skills, but I figured that he could accept and defeat without harboring on it years after.

But I’m not so sure about that now. Instead of lashing out at poor Mayweather, Hatton should be learning what he did wrong in that fight and vowing not to repeat the same mistakes twice. He’d be better for it. If he was truly over the defeat, he might want to consider lending a hand to Mayweather to help him promote the Marquez fight in any way he could.

I’m sure Hatton could think of some ways that he could be productive in helping sell some tickets for that fight. That would be real healing, I think and it would be a sign of growth and maturity for Hatton.