Russell Too Much For Reyes 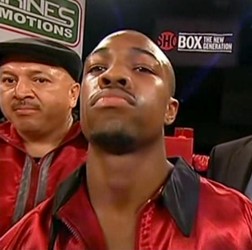 By Jim Dower: Featherweight prospect Gary Russell Jr. (1-0, 1 KOs) made a successful start to his pro career, defeating Antonio Reyes (3-3) by a third round TKO on Friday night at the Million Dollar Elm Casino, in Tulsa, Oklahoma. Russell, 20, a two-time U.S National amateur champion and a 2008 Olympian, dropped a badly over-matched Reyes at the end of the 2nd round and finished him off with a flurry of shots at the start of the 3rd, causing referee Steve Smoger to stop the bout at 0:21 of the round.

Russell, a southpaw, looked impressive in the 1st round, stalking Reyes around the ring and nailing him with hard body shots and lefts to the head. Russell seemed unconcerned with throwing combinations early on, looking as if he wanted to end the fight with a one-punch knockout.

When Russell would let his hands go in a couple of brief flurries in the round, he looked lightning fast and reminding me a little of Cuban featherweight contender Yuriorkis Gamboa. But in Russell’s case, he uses much less combinations and doesn’t move his head and upper body as much as Gamboa.

That’s something Russell is going to need to work on, because he seemed kind of robotic the way he fought, and was very vulnerable to getting hit in the fight. Reye got hit with some really big shots in the round and by the end of it, he was already sporting a bloody nose. Reyes was able to catch up to Russell at the end of the round and tag him with a nice combination to the head.

At the start of the 2nd round, Russell nailed Reyes with a big left hand, hurting him. Russell then went after him, loading up with single left hand shots to the head. Reyes took the shots well and continued to try and fight back, missing often. Reyes’s nose began to bleed again, sending blood across his face and onto his trunks.

Reyes was beginning to look tired and seemed winded. Russell than nailed him with a big left uppercut to the head. Russell then began tagging him with right hooks and straight left hands to the head, snapping Reyes’ head back each time that Russell would land.

In the final seconds of the round, Russell hurt Reyes with a straight left hand and then a right hook, sending him back against the ropes. With Reyes badly hurt, Russell nailed him with a big right hook to the head, snapping his head back and sending Reyes down face first on the canvas. He then got up as the round ended.

For some reason, Reyes was allowed to come out for the third round. It seemed like a bad decision given how seriously hurt Reyes had appeared in getting knocked down in the 2nd. Russell went after him immediately at the start of the 3rd, hitting him with a big right to the midsection, and left to the head that sent Reyes backwards to the ropes. Russell then nailed him with a straight left, followed by a right to the midsection and then a blinding flurry of heads, which caused referee Steve Smoger to jump in between them and halt the fight at 0:21 of the 3rd round.