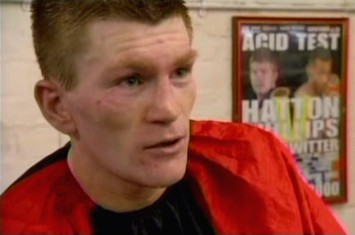 By Eric Thomas: According to the latest word in the news, Manny Pacquiao is reportedly not interested in taking the 52-48 purse split offer made from Ricky Hatton. At a recent press conference, Pacquiao said that he’s looking at a higher figure than the 52-48 purse split and might agree to a 55-45 split. It’s unclear whether Hatton would be willing to accept that offer, however. He has other options available to him and he can easily step away from this fight and go elsewhere rather than accept a purse split that he feels is unfair.

Hatton originally wanted a 50-50 purse split, which in the opening negotiations with Pacquiao, Manny was agreeable to that number. However, Pacquiao has had a change of mind since then and asked for a higher figure of 60-40, a number that Hatton felt was insulting to him due the huge PPV money he brings from England.

Hatton may indeed have other options but there’s only a limited amount that would bring him the kind of money that he’ll get from a fight with Pacquiao. A fight with Floyd Mayweather Jr. or Oscar De La Hoya would be two fights that would give Hatton a huge payday.

However, De La Hoya is probably not a good option right now due to the way he was badly beaten in his December fight with Pacquiao. The boxing public, including the cable networks, might not be able to stomach a fight between Hatton and De La Hoya right now. It would perhaps be better for De La Hoya to get a win or two over some no name fighter before fighting Hatton.

In the case of Mayweather, Hatton has already been stopped by him in a 10th round stoppage in December 2007. Though it would be a good payday for Hatton, given Mayweather’s easy win over him last time, it would seem to be not an appealing fight from the average boxing fan’s perspective. Hatton looked much too small for Mayweather in the fight and was never able to match up well with him.

Nothing has changed since then other than Mayweather staying out of the ring due to a year-long retirement. It’s hard to see that Hatton would have a better chance in a rematch and it would probably have fans seeing this fight as little more than a money grab for both fighters. That’s not the kind of fight that would be good for the sport at this time in my estimation.

Berto Wins, But Is His Future Limited? »