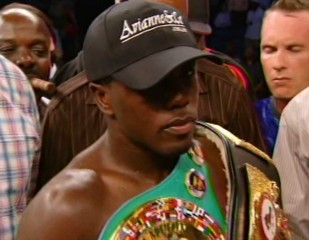 With his dominant TKO victory over Miguel Angel Rodriguez this past June to claim the vacant WBC welterweight crown, Andre Berto (23-0, 19 KOs) established himself as one of boxing most feared champions. Just 25 years old, Winter Haven, Florida’s Berto has already defeated proven veterans such as Cosme Rivera, Michael Trabant and Steve Forbes. Berto will need to draw on all of this valuable experience when he takes on mandatory challenger Luis Collazo (29-3, 14 KOs). Crafty southpaw Collazo, from New York City, is poised to win his second world championship – having already reigned as WBA welterweight king.

“Berto-Collazo has all the makings of a spectacular match up. Andre’s punch volume and non-stop pressure combined with Collazo’s poise and big-fight pedigree, make this the first ‘can’t miss” fight of 2009. Let’s not forget Luis has already gone 24 competitive rounds with Ricky Hatton and Shane Mosley. This is a great opportunity for Andre to show the world the champion that he is,” said DBE president Lou DiBella.

Madrid, Spain’s Martinez (44-1-1, 24 KOs) by way of Buenos Aires, is a former IBO 154 pound titlist, who put the American boxing audience on notice in October, as “Maravilla” produced a dazzling TKO victory over then WBA # 1 rated contender Alex Bunema to earn the interim WBC 154 pound title. Martinez faces a serious challenge in the form WBA # 3 rated Joe Greene (20-0, 14 KOs). New York southpaw Greene has already captured regional titles at 154 to 160 pounds, and is prepared to make his own sensational showing on HBO’s big stage.

“We all saw what Sergio Martinez can do in his last fight when he dismantled Alex Bunema, one of the top contenders in the junior middleweight division, who was rated by every major sanctioning body. Sergio will need to perform equally well against Greene because Joe is ready for his own statement,” said DiBella.

In addition, fans in the live audience on January 17 at the Beau Rivage Resort and Casino will get the opportunity to see undefeated and WBC # 9 rated junior middleweight contender Ronald Hearns (21-0, 17 KOs) in ten round action as well as local heavyweight favorite Will McIntyre in an eight round bout.

EU heavyweight champion Francesco Pianeta will be in action on Saturday night when he takes on unbeaten Frenchman Johann Duhaupas on the Valuev-Holyfield undercard in Zurich. It will be the first defence of the title he won in August thanks to an eighth-round TKO victory over Scott Gammer. “The title defence will put me one step closer to my next goal, which is winning the European heavyweight title,” Pianeta said. “I keep improving in training all the time and want to show that on Saturday.”

Both Pianeta and his challenger enter the fight with an unbeaten record of 17 wins and zero losses. The 24-year-old German, however, has one more KO to his name (11) than his opponent. “Duhaupas is very strong,” Pianeta said. “He is almost two metres tall, very quick and fires very dangerous hooks. But I am not worried at all – I have practiced very well and know what I am capable of doing. I will not underestimate him but I will not overestimate him either. I have no doubts that I will win.”

GAVIN SAYS HE IS THE FUTURE

Hot prospect Frankie Gavin says he is the future of British boxing – and will take up the reigns once the current crop of stars have retired.

His career will develop alongside those of fellow 2008 Olympians Billy Joe Saunders and Gold medalist James DeGale.

And during a media work out today in Manchester, Gavin said the trio are the next generation of stars.

“But they will be coming to the end of their careers in the next year or so, and the search is already on for the boxers who are going to replace them.

“I think that guys like James, Billy Joe and myself can step into their shoes and deliver the fights that the British public want to see.

“It’s not going to be easy getting to the top, but we’ve got the talent to get to world level, and we’ll all be pushing each other on to get there.

“I’m so excited about the next couple of years, because with the backing of Frank Warren, who developed Hatton, Calzaghe and Naseem Hamed into household names, we’re going to get lots of publicity and the same kind of recognition that the top name fighters are getting at the moment.

Gavin, 23, will be trained by Anthony Farnell in Manchester, and impressed when he was put through his paces today.

“We’ve got a great camp here with some quality lads in the gym,” he added. “There’s no cutting corners, and every day I’ve got to 110% on top of my game otherwise I get found out.

“I’ve improved so much already, and I can’t wait until my first professional fight because people are going to be really impressed by what they see.”

Sacramento’s Stan “THE MAN” Martyniouk has been added to the undercard of “CIVIL WAR”, headlined by the long awaited grudge match between Jesse Brinkley and Joey Gilbert at the Reno Events Center on Saturday, February 14, 2009, it was jointly announced today by Chet Koerner, President of Las Vegas based TKO BOXING Promotions and Terry Lane of Reno’s “Let’s Get It On” Promotions.

Since turning professional in October 2007, the 23 year old Martyniouk, 4-0 (1KO), has quickly become one of the west coast’s hottest boxing prospects. His illustrious amateur career spanning 85 bouts, was highlighted by a bronze medal at the 2007 National Golden Gloves tournament and his winning the U.S. Regional Championships three years in a row.

“We’re very excited to add Stan to our “CIVIL WAR” event. Along with his world class skills, he brings an all action style that the Reno fans will love” said Chet Koerner.

“I’m thrilled to fight in Reno on such a big card” said the Russian born Martyniouk. “The fans in Sacramento and Northern California have been terrific to me since I turned pro and I’m looking forward to putting on a great performance in Reno .”

Martyniouk is coming off a four round unanimous decision over Terrance Jett on July 31st at the Red Lion Hotel in Sacramento , his third bout at that location. More details on his bout at “CIVIL WAR” will be announced shortly.

“The key for Stan is to keep him busy in the upcoming year, ideally we’d like to have him fight six to eight times in the New Year and this is a great opportunity to fight close to home in front of a huge crowd”, said manager Joe Pastore.

For more information on Stan “THE MAN” Martyniouk, please visit his website at www.stanmartyniouk.com

Tickets for “CIVIL WAR”, priced at $253.25, $153.25, $78.25 and 43.25 are on sale now at the Reno Events Center box office and through Ticketmaster. A five dollar discount is available on tickets priced at $43.25 for students, active military, and police and fire department personnel with valid ID. Doors will open the night of the event at 6pm, with the first bell at 7pm.

“CIVIL WAR” is presented by Las Vegas based TKO BOXING Promotions and Reno ’s “Let’s Get It On” Promotions.

Reno, Nevada based “Let’s Get It On” Promotions was founded in 2000 by legendary boxing referee Mills Lane . In early 2005 he was joined by sons Terry and Tommy in the operations of the company. Along with Jesse Brinkley, Let’s Get It On Promotions also promote highly regarded brothers Tyler and Derek Hinkey. They have consistently promoted world class boxing events in northern Nevada .

Further information on “Let’s Get It On” Promotions can be viewed at www.letsgetitonboxing.com