Berto says Mayweather could tarnish his rep with loss to Tenshin 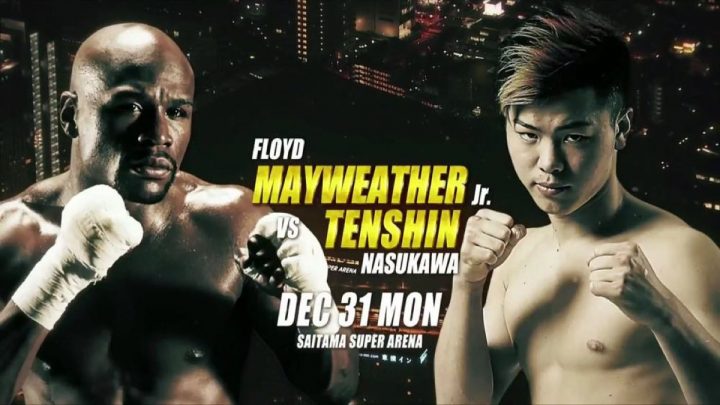 By Mike Smith: Former IBF/WBC welterweight champion Andre Berto says Floyd Mayweather Jr. is taking a big risk in facing little known 20-year-old kick boxer Tenshin Nasukawa, and that he could hurt his reputation forever if he gets beaten by the Japanese fighter in their three round combat exhibition match on December 31 at the Saitama Super Arena, in Saitama, Japan.

Mayweather is said to be getting an eight-figure payday in facing Tenshin in three, three minute rounds on the 31st of December in Japan.

Mayweather, 41, is expected to win the exhibition, but there’s always a chance he could lose. The 20-year-old Nasukawa is blazing fast, and he’s going to be going all out for the short three round fight to outwork Mayweather. Tenshin looks powerful in working out, and Mayweather might not realize how much power the Japanese fighter has until it’s too late.

“It would tarnish it for sure. You cant be 50-0 fighting some of the best fighters in the world then get knocked out by some kid,” Berto said.

Some boxing fans would argue that Mayweather has already done a good job of hurting his own legacy with his decision to start fighting only MMA fighters. In a move that was highly criticized by boxing fans, Mayweather defeated UFC fighter Conor McGregor by a 10th round stoppage last year on August 26, 2017 at the T-Mobile Arena in Las Vegas, Nevada. The Nevada State Athletic Commission sanctioned the Mayweather-McGregor as a pro, counting on Mayweather’s record. This enabled Mayweather to break the late Rocky Marciano’s 49-0 record. Mayweather’s record now is 50-0 with 27 knockouts. Some feel that it was a cheap way for Mayweather to surpass a record that had stood for many years. If this MLB, it would be the equivalent of a slugger breaking Barry Bonds’ record of 762 career home runs by facing a minor league pitcher that was just brought.

In other words, if Tenshin can bum rush Mayweather, throw a lot of big power shots, and then kick him to the head, he can win. Tenshin has the kicking skills to end the fight in round one if he decides to go that route. Mayweather isn’t going to be able to defend against kicks for any length of time before he’s hurt. If Tenshin does decide to start kicking, he’s going to need to make it count right away, as the referee is going to likely grab him to keep him from continuing to kick. You would have to believe that fight will be stopped on the spot at that point, as it would be viewed as a flagrant foul. With all the money involved in the fight in Japan, it would be bad for Tenshin to be disqualified in that manner.

Kenny Bayless will be the referee for the Mayweather vs. Nasukawa fight. Bayless is arguably Mayweather’s favorite referee, and he’s worked six of his fights in the past. Out of Mayweather’s last 13 fights, Bayless has worked 6 of them.

It’s possible the 20-year-old Tenshin could throw a kick to try and hurt Mayweather, but it would cost him with him being fined. Tenshin is not allowed to use any MMA moves inthe fight against Mayweather. That was written into the contract for the fight. If Tenshin does decide to kick or use whatever tactics that are allowed in MMA, he’ll be facing a fine afterwards. The question is whether it’ll be worth it for Tenshin to use his MMA tactics to hurt Mayweather.

If Tenshin knocks Mayweather out with a kick to the head, he’ll receive a lot of attention worldwide for having done it. At the same time, it might persuade Mayweather to stop fighting guys from the MMA world in boxing matches. It’s possible though that Mayweather will continue to fight MMA guys no matter what, because it’s easy money for him. All he needs to do is show, and he wins the fight because the MMA fighters have no experience in boxing. What Mayweather will likely do is make sure that the penalty for using MMA moves is so hefty that no fighter would want to take the risk of using them against him. If they have to give up their entire purse for kicking Mayweather, then it’s obviously not going to be worth it for them to use that tactic.

In boxing, Mayweather has wins over Saul Canelo Avarez, Juan Manuel Marquez, Manny Pacquiao and Oscar De La Hoya. However, Mayweather’s career will be tarnished if the little 5’5″ Tenshin knocks him out with a legal punch in their exhibition match. It would be like how Roy Jones Jr. fought a little too long in his career, and wound up suffering knockout losses to Antonio Tarver, Glen Johnson, Enzo Maccarinelli, Denis Lebedev and Danny Green. These are fighters that Jones would have likely beaten with ease during his prime, but he was old when he fought them.

Berto lost to Mayweather by a 12 round unanimous decision in September 2015. At that point, Mayweather retired from boxing. For all intents and purposes, Mayweather never returned to the sport, even though his last fight against Conor McGregor was sanctioned as a professional fight under boxing. Mayweather’s last fight against a real boxer from a boxing background was his match against Berto in 2015.

The only way Mayweather’s reputation is tarnished is if he’s knocked out by a punch from Tenshin rather than a kick. It would obviously make Mayweather look bad if he’s knocked out by a kick to the head, but his legacy wouldn’t be tarnished near as bad as it would if he’s stopped by punches from the Japanese fighter. Mayweather would have an excuse for being knocked out if it’s from a kick, as he didn’t train for that kind of fight. Tenshin would have used a tactic that was illegal, so the boxing fans wouldn’t come down nearly as hard on Mayweather for getting hurt from an MMA move as they would from a punch. Never the less, Mayweather’s legacy is clearly being eroded with the way that he’s finishing out his career by fighting strictly MMA fighters rather than staying in boxing and fighting guys from that sport. It would be like a great tennis player deciding that he wants to finish his career playing just guys from the NBA or NFL. The matches would be ridiculed by fans for being unfair, but there would obviously be money to be made due to the oddity of it. What’s really disappointing is that Mayweather doesn’t need the money. He was already wealthy before he decided to only fight MMA fighters in boxing matches.