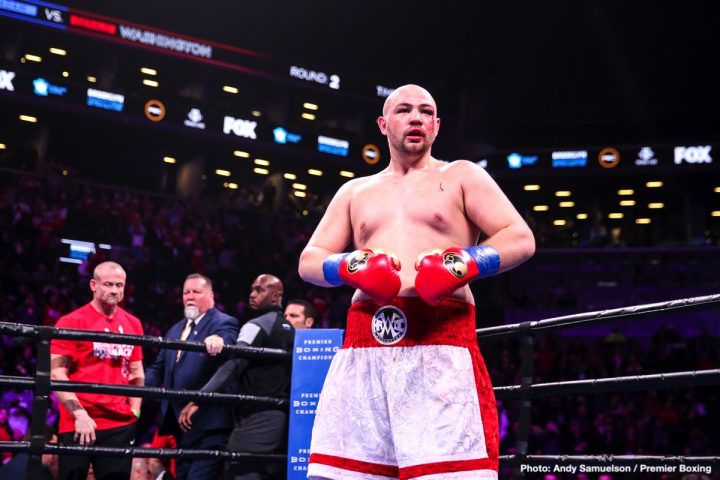 Undefeated Polish star and Brooklyn-native Adam Kownacki will look to thrill in front of a hometown crowd when he steps into the ring against veteran former title challenger Chris “The Nightmare” Arreola for a 12-round heavyweight showdown that headlines FOX PBC Fight Night on FOX and FOX Deportes Saturday, August 3 from Barclays Center, the home of BROOKLYN BOXING™.

The heavyweight division is red hot and Kownacki is a top rising challenger who will look to continue his ascent up the rankings with a win over the all-action veteran Arreola. This will be Kownacki’s ninth fight at Barclays Center, and his first as the headlining attraction.

Tickets for the event, which is promoted by TGB Promotions, go on sale on Friday, June 7 at 10 a.m. and can be purchased at Ticketmaster.com. Tickets can also be purchased at the American Express Box Office at Barclays Center starting Saturday, June 8 at noon.

“This action-packed tripleheader is full of high stakes, toe-to-toe matchups with fighters highly-motivated to make a statement on the big stage,” said Tom Brown, President of TGB Promotions. “Brooklyn’s Polish star Adam Kownacki has become a fan-favorite in his hometown and is surely in for a challenge from the always exciting Chris Arreola, as he looks to make a heavyweight statement. Andre Berto is always in action fights and he’ll be looking to hold off the young challenger Miguel Cruz, while Marcus Browne returns off his career-best victory to face battle-tested former champion Jean Pascal.”

“All eyes are on boxing’s heavyweight division, and I am thrilled to welcome Brooklyn’s own contender Adam Kownacki back to our ring for his first time as the headliner,” said Brett Yormark, CEO of BSE Global. “Adam has built an enthusiastic fan base in the borough, and I am confident they will be out in full force to support him as he takes on veteran Chris Arreola to earn a title shot in the near future. It will be yet another heavyweight night to remember in Brooklyn.”

Kownacki (19-0, 15 KOs) is noted for his tenacity and has been progressing towards a world title shot with knockouts in five of his last six fights. The 30-year-old, who was born in Lomza, Poland and moved to Brooklyn when he was seven, was an accomplished amateur in New York City before turning pro. He scored an impressive unanimous decision victory over former world champion Charles Martin last year and is coming off of a devastating knockout victory against Gerald Washington in January on FOX. His last three fights and six of his last seven have taken place at Barclays Center, where he has routinely brought out the area’s passionate Polish sports fans.

“I’m excited to be back in the ring and back at home in Barclays Center, live on FOX and FOX Deportes,” said Kownacki. “Fighting Chris Arreola will be another step on my journey to become a world champion. It will be a Polish-Mexican War that will bring fireworks to Brooklyn. Make sure you’re there in Brooklyn or watching in primetime!”

Arreola (38-5-1, 33 KOs), a veteran of the heavyweight division, has contended for the world title three times, most recently against WBC champion Deontay Wilder in 2016. Since losing to Wilder, the 38-year-old Arreola from Los Angeles, California has put together back-to-back victories, including a stoppage of then unbeaten Jean Pierre Augustin on a PBC on FOX Sports pay-per-view undercard in March.

“I can’t wait to step into the ring on August 3 and show everyone I’m still one of the best heavyweights in the world,” said Arreola. “I feel rejuvenated and ready to upset Adam Kownacki in front of his fans. He better be ready, because I’m going to bring it to him like he’s never seen before. This is going to be a war and I will leave with my hand raised.”

Berto (32-5, 24 KOs) has fought some of the top welterweight champions of this generation, including Floyd Mayweather. The 35-year-old won a welterweight world title with TKO victory over Miguel Angel Rodriguez in 2008 and successfully defended it five times before losing it to Victor Ortiz in 2011. He later avenged that loss to Ortiz with a knockout victory in 2016 on FOX. A native of Winter Haven Florida, Berto is coming off a split decision victory over former welterweight champion Devon Alexander in his last fight in August on FOX.

“I’m looking forward to this fight on August 3,” said Berto. “My focus is different, my motivation is different and my hunger is different. I’ve had a lot happen in my life in a short period of time with the loss of my father and the birth of my new baby girl, Legaci. It’s definitely turned me in to a whole different type of animal. August 3 is going to be cinematic. Barclays Center – see you soon. I’ve got some payback.”

Cruz (18-1, 12 KOs) is among a group of promising welterweights prepared to burst onto the scene in one of the most talent-rich division in boxing. The 28-year-old from Lake Mary, Florida will be stepping up a level with his bout against Berto. He scored a TKO victory over Luis Eduardo Florez in his last fight in January to bounce back from a decision loss to Josesito Lopez on FOX in April 2018.

“I’m excited for all my Boricuas and NYC fight fans to come out and show love in August 3,” Cruz said. “I want to thank everyone who made this opportunity possible, and I’m definitely going to make the most if it. This is a different era in boxing and I’m here to prove it to the world and to Andre Berto. Don’t miss this night of boxing.”

The 28-year-old Browne (23-0, 16 KOs) won the interim title with a rousing unanimous decision victory over former two-division champion Badou Jack in January. A 2012 U.S. Olympian from Staten Island, Browne has fought at Barclays Center 12 times in his career as he made his steady climb up the light heavyweight ranks. Pascal will be the second straight former world champion that he has faced.

“I’m honored and grateful to be able to display my skills on this huge platform on FOX and at Barclays Center, which is a second home for me and my boxing career,” said Browne, who will be fighting at Barclays Center for the 13th time. “I anticipate Pascal bringing everything that he has into this fight because this is make or break for him. Unfortunately for him, he will break, as I plan to win this fight decisively and continue my quest for a long and successful championship reign. I expect him to come in as prepared as a championship-caliber fighter and I’m staying motivated to get the win on August 3.”

Pascal (33-6-1, 20 KOs) has been in the ring with the top fighters of his era during his brilliant career, including Bernard Hopkins, Sergey Kovalev, Carl Froch, Lucian Bute and Chad Dawson. The 36-year-old, who was born in Port-Au-Prince, Haiti and now lives in Laval, Quebec, Canada, won the light heavyweight world title with a unanimous decision over Adrian Diaconu in 2009. He is coming off a loss to Dmitry Bivol in his last fight after putting together back-to-back TKO victories over Ahmed Elbiali and Steve Bosse.

“Marcus Browne is one of the most talented fighters in the world and I will have to be at my best to beat him,” said Pascal. “I’ve been training and I will be ready. I’ve got some veteran tricks he’s never seen before. I plan on out boxing him just like every other southpaw I’ve ever fought. I’ve never lost to a lefty and it’s going to stay that way come August 3.”