Demetrius Andrade vs. Demond Nicholson on Showtime pay-per-view on Jan.7th in Washington, D.C.

By Dan Ambrose: Demetrius ‘Boo’ Andrade will be fighting the always tough Demond Nicholson in a 10 round fight as part of the Gervonta ‘Tank’ Davis vs. Hector Luis Garcia card on SHOWTIME pay-per-view on January 7th at the Capital One Arena in Washington, D.C.

Obviously, the 34-year-old Andrade would prefer to be higher up on the card. Still, with the young welterweight phenom Jaron ‘Boots’ Ennis on the card in the co-feature lot, Demetrius doesn’t have a good enough opponent for the event to take a higher slot.

Andrade recently vacated his WBO middleweight title to move up to 168 in search of a lucrative fight against undisputed super middleweight champion Canelo Alvarez.

The fight with Nicholson will be Andrade’s first at 168, and it’s rumored that he’ll be fighting Jermall Charlo next at super middleweight. 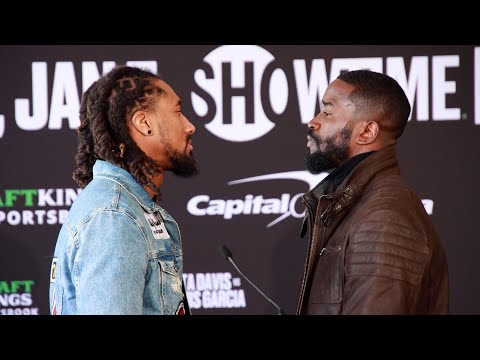 Getting a chance to face Canelo probably will never happen because the Mexican star has other fights on his plate in 2023, and he’ll not be excited at the prospect of facing the tall crafty southpaw.

“My goal right now is to become a three-division world champion,” said Demetrius ‘Boo Boo’ Andrade. “Super middleweight is a stacked division with more characters to make some great fights for the fans.

“I hope Demond Nicholson has a safe camp and brings his very best to the table so that we can have a great showing on this card. I’m ready to display my talent and skill on my journey to becoming a three-division world champion.”

Demetrius had been signed with Matchroom Boxing, but his popularity didn’t increase in the last two years, chiefly due to him being matched against the wrong type of opposition.

Nicholson has won his last three fights, beating Christopher Booker, Gabriel Pham, and Victor Dorocha. Before that, Nicholson was beaten by Edgar Berlanga by an eight round unanimous decision in April of last year in a competitive fight.

Nicholson’s best wins were arguably against Jessie Nicklow, and Mike Guy. He fought to an eight round draw against the always-tough Immanuwel Aleem in 2016.