Munguia (40-0, 32 KOs) is making his seventh appearance in the middleweight division since moving up in weight from the 154-lb class in 2020.

According to the 26-year-old Munguia, he expects to be involved in big fights in 2023, and he’s targeting IBF/WBA middleweight champion Gennadiy Golovkin and WBC champion Jermall Charlo.

The Argentinian Coria (21-5, 8 KOs) is coming into Saturday’s fight hoping to spoil Munguia’s party, but he’s got his work cut out for him because he doesn’t possess the power, size, or the work rate needed to pull off the upset. 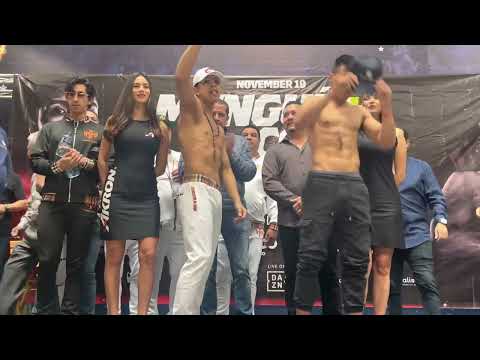 “It is an emotion to be from Mexico. It is a country of champions where boxing is in the blood,” said Jaime Munguia to DAZN. “So for me to come to other places, other countries, and put the name of Mexico on high and have people with that name in my corner is a great honor.”

“We are going to Guadalajara for people to know him, to see him, he is going to be very important in the end,” said legendary former world multi-weight champion and now trainer Erik Morales about Munguia.

“He is conquering cities so that the day he has the opportunity to be at the top, he will have the support of these people.”

“He was prepared little by little in that sense, and I think at this moment he is prepared to bring that weight of being the maximum reference in Mexican boxing just as he was a the time, Julio Cesar Chavez, Erik Morales, Juan Barrera, Marquez,” said Munguia’s trainer Fernando Hernandez.

“I can tell you countless boxers that have carried the weight on their backs of being the highest representative of Mexican boxing. And I think Jaime is in his moment and is about to achieve it.”

What Country Has the Most World Boxing Champions? »