By Charles Brun: Anthony Joshua and Dillian Whyte are expected to meet in the first half of next year if ‘The Body Snatcher’ wins his next fight on November 26th against Jermaine Franklin.

Joshua (24-3, 22 KOs) and Whyte (28-3, 19 KOs) are both coming off losses and are no longer winning like they did a decade ago. Both guys, you can argue, are on the steep downside of their careers.

Eddie Hearn believes that British boxing fans are still eager to see Joshua and Whyte battle it out for a second time despite their recent poor performances.

It would be a real disaster if Hearn books Wembley Stadium for the Joshua-Whyte II rematch, and it turns out to be a ghost town inside that place.

If Joshua wants to stay relevant, there are far better options than Whyte. These would be far better choices for Joshua to fight in the first half of next year:

Perhaps the UK fans are more tolerant of mediocrity than American fans, as this is a fight that wouldn’t sell if both guys are from the U.S and were repeatedly losing as they both have.

Whyte lost two out of his last three fights and is coming off an embarring sixth round knockout loss to Tyson Fury. Dillian is now scheduled against the little-known Franklin this month in what some fans believe is a gimme to ensure that he doesn’t get knocked out yet again.

“When you look at Roy Jones Jr’s style, he was a prowling predatory figure in the ring, able to climb up weight divisions using his natural ability, and he could only see things that he and very few others could see, and he relied on those skills,” said Gareth A. Davies to talkSPORT Boxing about whether Roy Jones Jr is a good fit for Anthony Joshua’s new trainer spot.

“I do,” said Davies when asked if Dillian Whyte will be next for Joshua. “A big stadium fight. It’s not the O2 Arena. Spurs, Arsenal, or Wembley. It’s a big fight. It’s Brit-on-Brit crime when those two meet.

“It’s North on South London. It’s heritage, its blood, and those two have got it in oodles for each other,” said Davies.

“Listen, they gave us a great fight the first time around. They’ve developed so much to this point; both of them have, especially Dillian. It’s a really, really, really good fight,” said Catterall.

“Anthony Joshua is a big, powerful, dangerous man. I know he’s lost some musculature because you can see it at the moment. If they [Joshua and Jones Jr] can find symbiosis, we may have a new king. Stranger things have happened.”

“Roy Jones Jr is a great trainer. I think there are better people that are better suited for Anthony Joshua, that has been with heavyweights in the past that could get the very best out of him.

“I like Vergil Hunter, and I like Eddy Reynoso as well. Don’t bring them over here in the comforts of Sheffield and everything. Let’s do something different. Let’s change a little bit by going to America. Spend some time in California and work with those guys out there.

“In those gyms, you’ve got guys coming in from Cuba, various other places that will want to take his head off in sparring, and that’ll be the best amount of sparring that he’ll get,” said Catterall.

“I think that change of scene being in America for Anthony Joshua takes the pressure off him in a lot of ways,” said Davies. “I think he’s very controlling in a good way. I’d like to see a rite of passage for phase three of his career. It’s make or break.

“When he started his journey in 2012, we didn’t have five of the six best heavyweights in the world in Britain in the top 10. We do now from Britain. That’s obviously Tyson Fury’s comeback as well.

“It’s a difficult one for Anthony because he can’t unlearn what he’s learned. George Foreman said about him that he’s an incredibly talented fighter, but he needs to know what he is and go out and be that. That’s a destroyer,” said Davies.

“What’s happened over a period of time is that he’s tried to become a boxer,” said Catterall about Joshua. “For me, Anthony Joshua is a wrecking machine. It’s finding someone that can get him back to what he was at the start of his career.

“I genuinely think he can come again. He has all the tools in the toolbox to come again to become a heavyweight champion for the third time. That’ll be an unbelievable achievement. He just has to find the right people.” 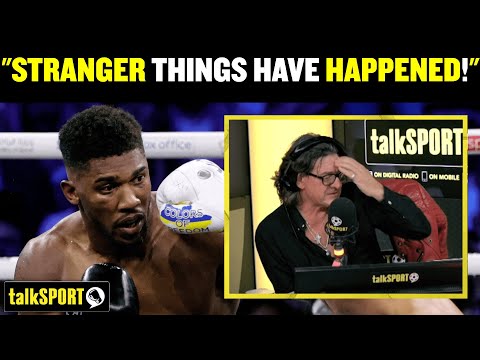