By Vince Dwriter: After constructing a legendary boxing career that included winning 15 major world championships, Floyd “Money” Mayweather has continued his boxing success by way of the exhibition circuit, and on November 13, Mayweather humiliated Youtube Boxer Deji as he collected a 6th round TKO victory at the Coca Cola Arena in Dubai.

Deji is a 25-year-old YouTuber from London, England, who made the transition to boxing in 2018. The transition hasn’t been very smooth due to the fact that Deji lost his first three bouts. He finally won a match in August 2022, and a month later, an announcement was made in regards to Deji competing against Floyd “Money” Mayweather in an exhibition boxing match.

Deji is the younger brother of an undefeated Youtube boxer who goes by the name of KSI. Despite his losing record, Deji is still a popular individual in the UK, and his popularity equates to a golden opportunity for the 45-year-old Mayweather to team up with an opponent and generate a big payday.

At the start of the opening round, Mayweather showed no respect for Deji as he pressed forward with a smirk on his face and his hands down by his waist. For the duration of the first round, Mayweather feinted, dodged his opponent’s punches, and threw a lazy, playful-looking jab.

At the end of the first round, Mayweather jogged to his corner, smiling, dancing, and talking to the crowd. At the start of round 2, the crowd got involved as they chanted Deji’s name, and he responded by landing a lead right hand. While his opponent was locked in on the match, Floyd was standing in front of Deji, landing low-impact punches and holding a conversation with Deji’s trainer.

The bell sounded to officially end round 2 as Floyd proceeded to taunt the members of Deji’s team, walk back to his side of the ring, dance, and do some mitt work with his corner man. Deji came out in the third round and landed a few decent shots, but Floyd continued to play around and toy with his opposition. 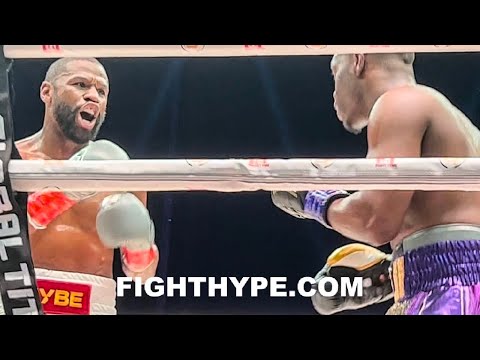 While Mayweather constantly pressured his opponent with his hands down, Deji was able to hit Mayweather with a flush shot in the third round that resulted in some swelling under Mayweather’s eye. Mayweather proceeded to slightly pick up the pace, but he was still in full entertainment mode.

Floyd’s demeanor changed at the conclusion of the fifth round when he witnessed something he didn’t appreciate. While Mayweather was in his corner receiving treatment for his left eye, Deji was in the opposite corner doing push-ups. Mayweather came out in the sixth round and used the high guard while walking his opponent down.

Floyd Mayweather went into competition mode as he was putting his punches together and landing some effective shots. Once Mayweather walked Deji into a corner and started landing shots upstairs and downstairs, referee Kenny Bayless stepped in to put a halt to the contest.

After publicly humiliating his opponent, Mayweather gave Deji words of encouragement, and then he presented him with some type of boxing belt. Overall the event was a bit comical, but as long as characters with massive social media followings have the ability to team up with Mayweather and generate a substantial amount of revenue, then that means the Floyd Mayweather exhibition tour will continue.