By Vince Dwriter: As WWE star Stone Cold Steve Austin’s music was playing in the arena, welterweight contender Blair “The Flair”Cobbs did his walk to the ring wearing the Stone Cold vest, and when he stepped inside of the ring, he opened up a can of whoop ass on Maurice Hooker during their Saturday night clash at the Dickies Arena in Fort Worth, Texas.

Blair Cobbs got off to a fast start as he moved around the ring fluidly while picking his shots. Suddenly in an instant near the end of round one, Cobbs exploded with a left uppercut followed by an overhand right that knocked Hooker down. Once the bell sounded to start round two, the problems continued for Hooker as Cobbs hit him with a big overhand right followed by a four punch combination that sent Hooker down for the second time in the fight.

Later in the second round with only ten seconds to go, Cobbs caught Hooker coming in and nailed him with a left hand that sent Hooker down to the canvas for a third time. After only two rounds, Hooker faced a major deficit of 10-8 and 10-7 on the judge’s scorecards.

Hooker continued to press forward but he wasn’t active. Cobbs used Hooker’s aggression against him as he successfully countered multiple times with the left hand. With good movement and effective counterpunching, Cobbs was on cruise control until he faced a bit of adversity in the sixth round.

During the course of the sixth round a accidental headbutt opened up a cut around Cobbs’s left eye and Maurice Hooker capitalized on it, and had his best round of the fight. A second headbutt occurred in the eighth round as the referee walked Cobbs to the corner to see the doctor. Cobbs was able to continue as he cruised through the final two rounds and collected a unanimous decision victory by the scores of 97-90, 97-90, and 96-91.

Blair Cobbs (16-1-1, 10 KOs), was poised, focused, and he executed his game plan to perfection. In March he loss to Alexis Rocha, and five months later he responded with an excellent bounce-back performance. His opposition Maurice Hooker (27-3-3, 18 KOs), seemed distracted and unfocused. He came into the fight missing the required weight by weighing in three pounds over.

Hooker weighed in at 150 pounds and the extra weight hit his pockets as he had to pay a penalty fee. In addition to being overweight, Hooker was dealing with the loss of a love one, and it may have possibly had something to do with his lackluster performance in the ring. After Cobbs built up a big lead it was time for Hooker to show some urgency, and let his hands go, but he just couldn’t do it.

Blair Cobbs needed a big comeback performance and he delivered one in dominant fashion. He outboxed Hooker and did whatever he wanted to do in the ring. Cobbs put on a pure clinic, and this victory should open up the door of opportunity for Blair “The Flair” Cobbs. 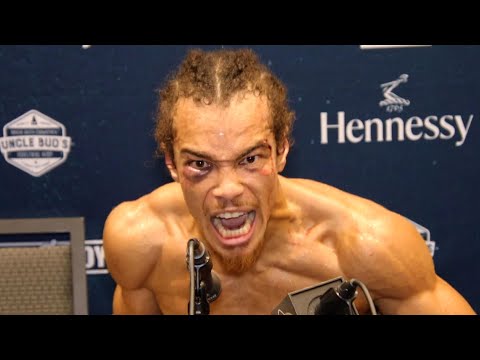