By Jim Calfa: Jeff Mayweather says Gervonta ‘Tank’ Davis is a tremendous challenge for Shakur Stevenson when he moves up in weight to the lightweight division after he finishes his goal of becoming the undisputed champion at 130.

Shakur still has two more titles to capture at super featherweight before he is ready to move up in weight to 135. If everything goes well, Stevenson will be prepared to move up to the lightweight division by this time next year.

Stevenson (18-0, 9 KOs) got the hardest part of becoming a four-belt champion at super featherweight last Saturday night by defeating WBC champion Oscar Valdez by a decisive 12-round unanimous decision at the MGM Grand Garden Arena in Las Vegas.

Valdez (30-1, 23 KOs), a natural 126-pounder, looked dramatically undersized against the welterweight-sized Stevenson. Some speculate that  24-year-old Stevenson put back on over 20 pounds after weighing in at 135 lbs last Friday, putting him at 155 lbs.

“There’s a lot of challenges out there, and I think he’s going to get better as he goes up in weight as well,” said Jeff Mayweather to Fight Hub TV, when asked if there are any challenges for Shakur Stevenson out there for him to fight in competitive match-ups.

“You have Ryan Garcia, Devin Haney, you have Rolly, you have Tank,” Mayweather said about fighters that would be good challenges for Shakur.

“I would say Tank because he has one-punch knockout power. I’m not saying he’s the best, but if he hits you, chances are something is going to happen. He’s the only one out of all of them that has that factor that nobody else has,” said Mayweather.

It’s hard to say whether Stevenson will get better as he packs on more weight. If anything, he’ll get slower and easier to hit, which would make him more susceptible to getting hurt.

One thing is for sure. If Stevenson doesn’t begin increasing his power, he will be in a world of hurt when he faces someone his size that can punch.

For example, if Stevenson soon finds himself fighting at 147, that will put him in the crosshairs of Jaron ‘Boots’ Ennis.  That could be a problem for Shakur, especially if he gets hit over 100 times.

“I was in there with Shakur last, so I wasn’t surprised,” said Jamel Herring to Fight Hub TV, reacting to Stevenson’s one-sided 12-round unanimous decision over Oscar Valdez.

“Credit to Valdez. He landed the most punches ever to be landed on Shakur Stevenson, 110 exactly. Shakur is a technician and really crafty and really defensive skilled defensive genius in there. He’s hard to hit.

“He sees everything. It’s high ring IQ. You got guys that will parry & paw all night and still get clipped by leaving it out there.

With him, he reacts really quickly to any movement that you do with him, and that’s what makes it tough to hit him,” said Herring about Stevenson. 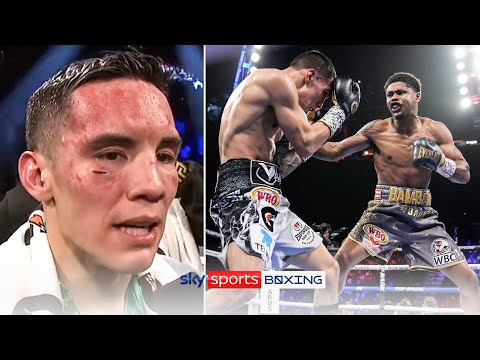