According to ESPN, the 34-year-old Andrade (31-0, 19 KOs) will have an MRI on his injured shoulder to identify if he’ll need surgery to fix the problem. If so, the fight with the unbeaten Parker (22-0, 16 KOs) will need to be pushed back.

For Andrade’s boxing fans, this is a disappointment because he’d planned on battling the 27-year-old Parker for the vacant interim WBO 168-lb title in hopes of putting himself in a position to force undisputed super middleweight champion Canelo Alvarez to face him finally.

Even if Andrade does beat the heavy-handed Parker to pick up the interim WBO super-middleweight belt, there’s no guarantee that Canelo will ever choose to fight him.

Canelo has never been excited about fighting the slick southpaw Andrade, and it’s reasonable to assume that he’ll drop his WBO 168-lb title if the World Boxing Organization orders him to take that fight.

There are too many soft targets for Canelo to take that present far less of a threat to him and his gravy train than Andrade.

The sad reality is, there’s too much Mayweather in Andrade with his fighting style, and the 31-year-old Canelo likely doesn’t want to be burned again by that type of fighter after his bad experience back in 2013.

Andrade had been scheduled to face Parker at the Pride Park Stadium in Derby, England. Whether the fight will be rescheduled for the same venue remains to be seen.

Interestingly, there has been precious little buzz about the Andrade vs. Parker with the boxing public, suggesting that this fight is not worth pursuing for the American talent.

David Benavidez says he wants to face Andrade after his fight against David Lemieux on May 21st. Andrade would be better off going straight to the Benavidez fight rather than taking the match-up against the little-known Parker, who is more trouble than he’s worth.

Benavidez and Andrade are in the same boat in terms of trying to get a fight against Canelo. The situation is beyond hope for them, regardless of whether they fight each, thinking they’ll increase their chances of getting a shot at the Canelo lottery.

“Demetrius Andrade suffered a right shoulder injury, and his May 21 fight vs. Zach Parker in the U.K. Is postponed, sources tell ESPN. The middleweight titleholder was set for his super middleweight debut. MRI will determine if surgery is required,” said Mike Coppinger.

Andrade is coming off a spectacular second-round knockout win over Jason Quigley. However, despite the triumph being an impressive one, Andrade’s promoter Eddie Hearn made it known that he would not extend his contract with Matchroom Boxing.

Hearn hasn’t been able to get the fights he hoped for the talented Andrade, and he’s giving up. Unfortunately, Andrade is too gifted for his good. 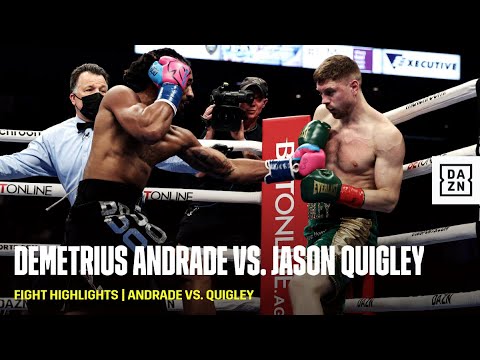