By Jack Tiernan: Ryan Garcia says he’ll be looking for a “destructive KO” of Emmanuel Tagoe this Saturday night in his return from a 15-month layoff at the Alamodome in San Antonio, Texas. 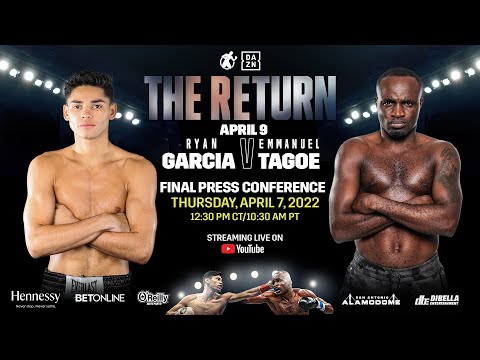 A fight almost broke out during Wednesday’s media day this week, as Ryan & Tagoe had words during their face-off. Things escalated from that point, forcing the staff to quickly separate the two before punches were thrown.

Tagoe has a long 32-fight winning streak that he’ll be coming into Saturday’s fight with, and Ryan is going to need to be mindful of the danger this fighter presents to him.

This is a more advanced-level fighter than the majority of the guys that Ryan has fought during his career. I wouldn’t say that Tagoe is on the same level as Ryan’s last opponent Luke Campbell, but he’s not far off in the talent department.

Ryan lucked out with Campbell because the big southpaw had already been recently softened up for him by Vasyl Lomacehnko.

“I’m so excited, I finally getting back in the ring after a long time, so good spirits, good energy, I’m flowing, feeling good and that’s where I’m at,” said Ryan Garcia to Fino Boxing about his thoughts ahead of Saturday’s fight with Emmanuel Tagoe on DAZN.

“I think a destructive KO, I like to knock people out, but I’m ready for anything,” said King Ry when asked what would be a perfect victory for him on Saturday night against Tagoe.

“If he makes it hard, he makes it hard. If he makes it easy, it’s easy. I’m ready. It’s amazing, the people over there, there’s just something about how they are, and they’re so supportive,” said Ryan about the boxing fans in San Antonio. “I can’t wait because the atmosphere is always amazing in Texas.

“Those are the fights that get people going, and I want to be a part of those events. So, I have to get the job done on April 9th to get that fight,” said Ryan when asked about how a victory over Tagoe could lead to a fight against Gervonta ‘Tank’ Davis.

“I’m going through this guy. He’s not going to take away my dreams, that’s for sure,” said Ryan on his desire to beat Emmanuel Tagoe on Saturday night.

Tank Davis fight on the horizon for King Ry

“It’s [Tank vs. Ryan Garcia] is a reality at this point, it definitely has to come. I’m going to be working hard every day, going through what I have to go through, and that fight will be one of the biggest of our generation 100%.

A Day in the Life of Ryan Garcia 📸

Take a look behind the scenes of media workout day with @RyanGarcia 👀 pic.twitter.com/R46aAiP24S

Gervonta ‘Tank’ Davis will be finishing out his contract with Mayweather Promotions next month on May 28th against Rolando ‘Rolly’ Romero.

After that, Tank will likely leave them, and potentially get snatched up by Top Rank or Matchroom Boxing. Ryan Garcia vs. Tank Davis will be a huge fight for later this year, provided King Ry gets past Tagoe on Saturday. It’s almost a given that Tank will defeat Rolly on May 28th.

“Really, they’re going to be tied up, so I’m not too worried about them,” said Ryan Garcia bout Devin Haney and George Kambosos. “They’re going to have a good fight going on, so let the best man win.

“I’ll be looking to fight Loma hopefully, but he might get that winner [of Kambosos vs. Haney]. I don’t know really, but I would like to fight Loma or go to 140 to fight Teofimo [Lopez]. It’s just where the opportunity lies,” Ryan Garcia said.

Vasyl Lomachenko is still in Ukraine, defending against the Russian invasion, and unlike his fellow countryman Oleksandr Usyk, he may choose to stay until the fighting is finished.

As such, a match between Ryan and Lomachenko is unrealistic to think about happening in 2022.

“140 is good or 135, I can make both,” said Ryan. “We have good chemistry together. There are not many differences,” said Garcia when asked what the difference is between his new trainer Joe Goosen and his past coach Eddy Reynoso.

“A great fighter comes from within, but I think that I have a good time in the gym [with Goosen]. I’m happy now and I think that’s all that matters,” said Ryan in his state of mind following his switch from Reynoso to Goosen.

Ryan is pleased with the switch from Reynoso and Goosen because his new coach is devoting a lot of time to him. Additionally, Ryan is training with Goosen on beautiful Coronado Island in San Diego.

For the boxing fans that have been to that area of San Diego, it’s quite breathtaking. The scenery, the people, and the overall environment are a dream.

The most important thing that has come from the 23-year-old superstar Ryan Garcia’s switch from the ultra-busy Eddy Reynoso to Goosen is the time element.

It’s important for Ryan to have a coach that can put the time in with him at this juncture of his career, and he seems to have the ideal trainer in Goosen.

Ryan’s situation before with Reynoso, it wasn’t working, as the popular trainer has a gym full of big-name fighters that he works with. Trying to find the time to work with Ryan had to have been a nightmare for Reynoso.

Besides training Canelo, Reynoso also works with Oscar Valdez, Andy Ruiz Jr, and Frank Sanchez, to name just a few of the talented fighters in his stable.


« Golovkin wonders why Canelo waited 4 years to fight him