By Mark Eisner: Erickson ‘The Hammer’ Lubin and Sebastian ‘The Towering Inferno’ Fundora square off tonight in a 12-round WBC junior middleweight title eliminator to decide the mandatory for champion Jermell Charlo on Showtime at the Virgin Hotels Las Vegas, Las Vegas. The fight card begins at 10:00 p.m. ET.

Lubin – Fundora will be in the main event and Tony Harrison vs. Sergio Martinez in the co-feature. That fight is good enough to be a headliner if they weren’t put on the same card as the excellent Lubin vs. Fundora fight.

Boxing News 24 will be giving fight results below of tonight’s action: 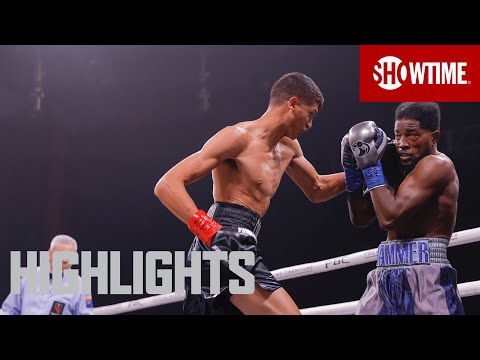 “I’m just worried about what I need to do. If my opponent can figure it out, I’ll just switch it up again,” said Sebastian Fundora to Fighthype. “Anything to get the win.

“The way I’m going at is not too fast, not too slow. I’m going at the right pace. It means a lot. We’re working hard to get where we’re at and it’s showing up now.

“That’s the style I like. If I have to switch it up, I will, but if it’s up to me, I’m going to go in and try and break your face,” said Fundora. “I throw that in the waste can,” Fundora said when told that some boxing people believe he’s going to be beaten by fighters that can get on the inside to work his body.

“It’s not a problem for me to make this weight. If anybody is going to know my body, wouldn’t it be me? My father,” said Fundora when asked who got him started in boxing.

“If anything, I give him more credit than I do me. He’s always been there, he’s always helped me in my career. He’s my trainer, my manager, my role model, and my father. He’s all these things. I give all the credit to him.

“I don’t want to deal with anyone outside, or anyone thinking they can get some freebies or jumping in late in the train, demanding, especially when they didn’t help as much as the rest of us.

“There’s no more room on this train, all these seats are taken, and I’m going to keep it like that. It just means the world to me, this is what we’ve been working for,” said Fundora when asked what it would mean to him if he were to be Lubin and earn the right to fight for a world title,” said Fundora.

“That’s what we want, we want a world title and we plan to get it. Expect a firefight,” said Fundora when asked what boxing fans can expect to see tonight in his WBC 154-title eliminator against Lubin.

“The ‘Towering Inferno’ is going to bring it all, and this is going to be the fight that you want to watch. I hope so, it’ll be a great show if he does,” Fundora when asked if Lubin will participate in a “firefight” against him tonight.

“I have [Jermell] Charlo because I see him as stronger than [Brian] Castano. I seen him clip him [Castano] a little bit easier than Castano did against Charlo, and I think that’s going to play a factor in this fight too.

“You’re not going to find no other 6’6” southpaw at 154, and if you did, you probably seen him on TV as well but you don’t. I don’t think you’re going to be able to prepare for us.

“I expect this fighter like all the fighters that have come before, I expect him to be 100%,” Fundora said about Lubin. “I want the best from them, so we can beat them at their best.”