By Mark Eisner: Ryan Garcia (22-0, 19 KOs) was forced to go the distance in beating Emmanuel Tagoe (32-2, 15 KOs) by a lackluster 12 round unanimous decision on Saturday night at the Alamodome in San Antonio, Texas.

Ryan, 23, dropped Tagoe in the second round and badly hurt him in the tenth round. However, Ryan couldn’t put him away.

“I got nothing but respect for Tagoe. he was crafty with his defense. moving all the time. I got to get better at cutting off the ring,” said Ryan after the fight.

“I think if I had pressed a little harder, I would have gotten him out of there. He’s very slippery, and I had to walk him down. I tried to knock him out. He was really hurt, but I couldn’t find the next shot. I’m going to let my team behind it.

I’m going to trust my team. When we fight, we fight,” said Ryan when asked who he wanted to fight next. 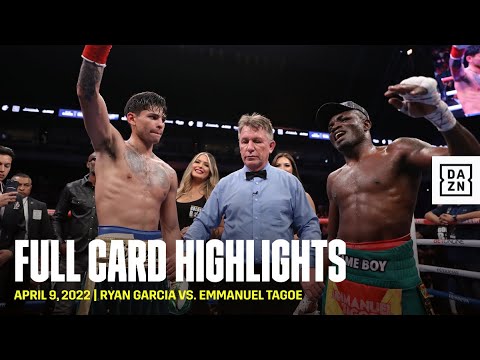 “I think we get a sensational performance from Ryan Garcia in San Antonio because obviously, you know the legendary Joe Goosen, I think this is the perfect partnership,” said Ray Flores to Abrams Boxing.

“I think we get a spectacular performance out of Ryan Garcia. Tagoe, he’s just a basic fighter. I think he has a blown-up record, and I see him as a guy that is going to come forward and try and press Ryan Garcia.

“I think Ryan Garcia wipes him out. You can’t prepare for the speed or the power of Ryan Garcia, and then you have the wisdom of Joe Goosen to be able to program Ryan Garcia.

“If Ryan Garcia is going to lose a fight as he’s getting ready for a title shot, it would have been in his last fight [against Luke Campbell] in which he got knocked down in the first round [second]. Then he came back and responded so well.

“I think Joe Goosen is the kind of guy that focuses on your strengths and tries to shore up your weaknesses. That’s what he’s going to do with Ryan Garcia.

“I think Joe Goosen has him so sharp, so laser-focused that it’s almost like the Roy Jones’ song, ‘Y’all must have forgot,'” said Flores. “Ryan Garcia hasn’t fought since January of last year, so fans need to be reminded about why there’s so much buzz and excitement behind Ryan Garcia.

“He has that opportunity on Saturday, and I think he will do it. That’s the fight the world wants to see,” said Flores about a match between Ryan Garcia and Gervonta ‘Tank’ Davis. “Mayweather Promotions tried to make that fight last January with Ryan Garcia but it couldn’t be made for some reason.

The fact that Ryan is fighting on April 9th, and Tank is fighting almost a month and a half later [on May 28th against Rolando ‘Rolly’ Romero]. You can make the scheduled work with each other.

“So, I’m hopeful and optimistic that we get that fight next, assuming that Davis beats Romero and Garcia beats Tagoe,” said Flores.

“You got a tall, rangy, fast-twitch fiber Ryan Garcia against a shorter guy that is going to need to try and get inside through that power, which is a danger zone for a pressure fighter trying to come inside,” said Max Kellerman on Max On Boxing about what Gervonta Davis would be up against tonight facing the knockout artist Ryan Garcia.

“It seems to me that Ryan Garcia would have real chances, and I hear that from people, but I don’t hear them say, ‘I like Ryan Garcia to win that fight.'”

“I think Ryan Garcia beats Tank Davis, I think Ryan is wildly underrated because he’s a social media star and has the looks and everything,” said Mike Coppinger.

“I think he’s wildly underrated, he’s great counter puncher with incredibly fast hands and great power. Gervonta Davis, I think he’s an excellent fighter, but he’s picked on a lot of smaller guys. We don’t quite know what he has.

“He hasn’t beaten an elite fighter in his weight class [lightweight] yet, and I think Ryan Garcia matches up very, very well with Tank Davis. At the very least, I think it’s a coin flip,” said Coppinger.

“That’s the first time I’ve heard someone say, ‘I like Ryan Garcia to win,'” said Kellerman. “I’ll tell you something else about that fight [Tank vs. Ryan].

“It is rare at this stage in guys’ careers where neither one has a signature win against an elite type of fighter, both guys bring real box office to the table. They both bring money to the game. It is rare where two explosive offensive fighters in that position to face each other at this point in their careers.

“So, ‘I’m skeptical that we see, ‘Ding-ding, round one there’s Garcia and Tank.'”

Ryan Garcia is in action tonight in an import return to the ring against Emmanuel Tagoe in a 139lb catchweight fight live on DAZN at the Alamodome in San Antonio, Texas.

The two are headlining on DAZN tonight at 9:00 p.m. ET in a contest that is expected to have a lot of fireworks.

Golovkin will have BIG problems against Canelo after beating Murata »