By Jim Calfa: Erickson ‘The Hammer’ Lubin weighed in at 153.25 lbs on Friday for his 12-round WBC junior middleweight title eliminator against Sebastian ‘The Towering Inferno’ Fundora for their headliner on Showtime at the Virgin Hotels Las Vegas, Las Vegas.  Fundora weighed in at 152.75 lbs.

The winner of the Lubin – Fundora fight will be the WBC mandatory challenger for World Boxing Council 154lb champion Jermell Charlo. The 5’9 1/2″ Lubin was dwarfed by the 6’5 1/2″ Fundora when the two met for the face-off on Friday. 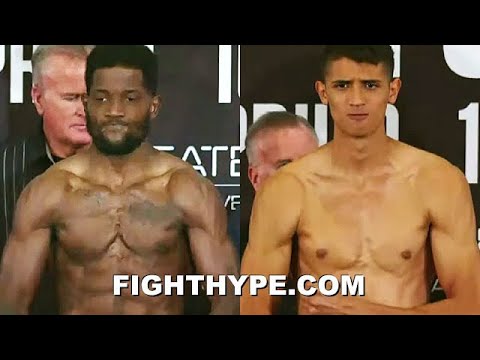 It was almost comical with the way the much shorter Lubin peered up at the tall Fundora (18-0-1, 12 KOs) as if sizing him up and trying to figure out how he’ll attack him on Saturday night.

Lubin (24-1, 17 KOs) has already made it clear that he’s going to be attacking Fundora’s body to break him down, but we’ll see if he can do that.

Fundora has a super high work rate, making it difficult for his opponents to attack him without getting chewed up from the nonstop punches he throws.

On paper, Lubin is the toughest opponent of Fundora’s six-year professional career, but he might not be. Fundora has already beaten these quality fighters:

Fundora’s height not a concern for Lubin

“I can’t give you the game plan, but whatever he brings to the table, I’m prepared for it,” said Erickson Lubin to Fighthype in discussing his fight against Sebastian Fundora on Saturday.

“When you’re the cream of the crop, you don’t worry about what that height is like. Saturday night, we got a fight. The game plan is drawn, and I got a world-class trainer Kevin Cunningham still with me.

“We’ve been in camp for nine or ten weeks in Vegas, and we’re well acclimated. We’re ready to showcase. I don’t worry too much about it [Fundora’s height, but Kevin is a mastermind like I said, he’s a mastermind in this boxing game.

“He’s prepared for this, he’s prepared the sparring and he prepared the training camp before we even came to camp. We had everything lined up for us when we got to Vegas, and we are ready.

“I just focused on all aspects of the game,” said Lubin when asked what improvements he made after his first-round knockout loss to Jermell Charlo in 2017.

“I didn’t just focus on what went wrong in the ring. I focused on things outside the ring as well. I tightened up everything and I crossed every T and dotted every I. I just feel like now is my time,” said Lubin.

It’s going to be fun to see how Lubin deals with Fundora’s height without getting sparked out like he was in his first-round knockout loss to Jermell Charlo.

That defeat came five years ago when Erickson was a lot younger than he is now, but he’s made improvements. We haven’t seen him in with anyone good enough to know if he’s ready for the big time again.

If Lubin beats Fundora, he’s going to have to potentially deal with Jermell again, and he’s going to need a good chin to survive.

“So, there’s no doubt in my mind that I’m going to be world champion. It’s coming, it’s coming real soon. I just do what I do best. I go in the ring, and I can adjust. I can make whatever happen. Any false moves, he’s going to have to pay for it.

“I’m definitely ready for anything he brings to the table. I’ll adjust when I’m in the ring. This whole situation means a lot to me. Just to be headlining in Vegas.

“I fought in Vegas before, but I was an undercard fighter during the time. But to be here in the Mecca of boxing and to be the main event, headliner, it means a lot. I’m here to do what stars do and that’s to shine.

“I’m looking forward to that,” said Erickson when asked about his thoughts on the May 14th rematch between IBF/WBA/WBC 154-lb champion Jermell Charlo and Brian Castano.

“The first fight was a great fight. I think in the second fight if Charlo makes the right adjustments, he can come out on top. It’s respect for anybody that gets in that ring,” Erickson said.

The experience between Lubin and Fundora is fairly close, and not enough to say that either of them has a clear advantage.

For Lubin to win, he’s going to need to knock Fundora out because he’s not to win a decision against this guy, not with him throwing as many punches as he typically does.

“Everybody gets the same kind of respect until they disrespect me,” said Erickson. “Because it’s Hammer time on Showtime, and like I always do, I give it my all.

“I’m at my best right now and I’m only getting better. I’ve got the right fights under my belt like Ishe Smith, Terrell Gausha, Jason Rosario. Those are very important fights for my career. I feel well-seasoned.

“I don’t think this guy [Fundora] has the experience that I have. Like I said, I’m the cream of the crop and I’m just going to show it on Saturday night, tune in,” said Lubin.

For Lubin’s sake, he needs to make sure he doesn’t get caught with one of Fundora’s big shots because he’s got more than enough pop in his punches to score a knockout.

It’s taken Lubin five long years for him to rebuild from his loss to Charlo, and he can’t afford to wait another five years. Lubin has got to make sure he doesn’t blow it again because I don’t think he’ll be able to come fully back from a second loss. 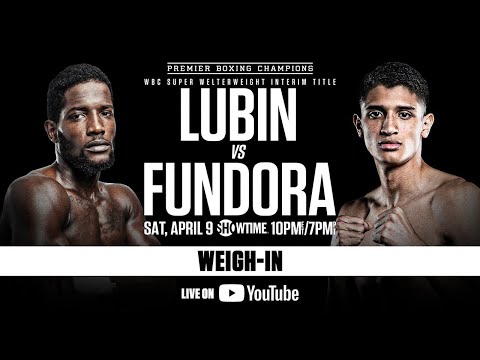 New Usyk Interview: “Some of My Friends Are Missing. Where Are They?” »