Erickson Lubin vows to bounce back from loss to Sebastian Fundora

By Jim Calfa: Erickson ‘The Hammer’ Lubin spoke for the first time on Tuesday since suffering a disappointing ninth-round stoppage loss to Sebastian ‘The Towering Inferno’ Fundora last Saturday night in their fight for the interim WBC junior middleweight title in Las Vegas.

Lubin is NOT asking for a rematch

What the 26-year-old Lubin isn’t saying is that he wants a rematch with Fundora, who you can’t blame him one bit for not asking for one.

It would undoubtedly be brave on Lubin’s part to begin asking Fundora to run it back, but it would make him appear to be a glutton for punishment in the eyes of the boxing world.

After the way Lubin was beaten, virtually no one would give him any chance of defeating Fundora in a rematch.

With the facial damage Lubin sustained in his ninth-round stoppage loss to the lanky 24-year-old ‘Towering Inferno’ Fundora, it will take many months of rest to recover from it.

Lubin reportedly suffered a broken nose and an injured jaw in the fight. In contrast, Fundora came out of the contest with a slight redness around his right eye and the left side of his face.

Thank you to all my fans and supporters I’ll be back ain’t no quit in me, Lord knows he made me special. #HammerTime

We learned from this fight that Lubin doesn’t possess the talent to beat the upper echelon-level fighters at 154. In Erickson’s previous loss to Jermell Charlo in 2017, he was stopped in the first round after taking the fight at arguably too young of age at 22.

After four years of rebuilding and maturing as a fighter, it was thought that ‘The Hammer’ Lubin was finally ready to contend for a world title.

Sadly, that wasn’t the case, with him taking a severe beating by Fundora through nine rounds before his trainer Kevin Cunningham mercifully pulled him out in the ninth.

Erickson did enjoy success against Fundora, getting the better of him through the first four rounds despite getting dropped in the second round from a right-hand uppercut. Lubin recovered quickly from that knockdown to dominate rounds three and four.

After taking punishment from Fundora in rounds five and six, Lubin came back to hurt him in the seventh, resulting in him taking a knee.

That was the last hoorah for Lubin, as Fundora got severe with him in the eighth, unloading nonstop headshots that turned the fight into a disturbing rout.

By the end of the eighth, it’s painfully apparent that Lubin’s face was too grotesquely swollen for him to last another round.

I’m extremely proud of the heart and guts that @EricksonHammerL displayed last night. Special thanks to all of our supporters. pic.twitter.com/fzdLwc1rpp

Erickson needs to be more selective

In the aftermath of this loss, Lubin can go back to taking the easier fights like he’d been doing for the last five years to rebuild.

I don’t know that it will help Lubin capture a world title, though, unless Jermell Charlo, Sebastian Fundora, and Brian Castano move up in weight to clear a patch for ‘The Hammer.’

Even if those fighters move up to 160, Errol Spence Jr. and Terence Crawford plan to move up to 154 soon. Those guys would likely present Erickson with the same trouble that Charlo and Fundora did.

Under an ideal situation, Lubin could grab one of the titles after Charlo or Castano vacates them and possibly defend it for a short period.

Lubin would need to fight a beatable contender for the vacated belt rather than a killer like Fundora for that scenario to play out. It doesn’t seem realistic for Lubin to win a belt during his career.

Fans are calling Fundora a “cheat”

Interestingly, some boxing fans are taking to social media to say that Fundora is a “cheat” because of his size advantage over his opposition at 154.

They feel that Fundora should be fighting at 160 or 168, even though he quickly makes weight for the 154-lb division. The weight classes don’t have height requirements.

Divisions are classified by weight, so it’s wretched to hear Lubin fans calling Fundora a “cheat” because he is so tall for the junior middleweight division. 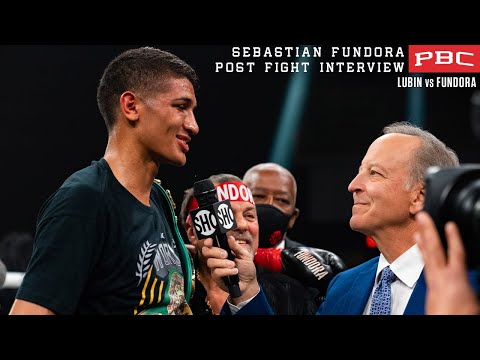 
« Golovkin could get “Brutally beaten” by Canelo says Tony Bellew

Conor Benn: ‘I have too much firepower’ for Chris Van Heerden »