Conor Benn: ‘I have too much firepower’ for Chris Van Heerden

By Charles Brun: Conor Benn isn’t overly concerned with the technical skills or the southpaw stance of veteran Chris Van Heerden ahead of their headliner this Saturday night on DAZN at the Manchester Arena in Manchester, England.

Benn’s promoter Eddie Hearn is saying that if he’s victorious on Saturday night against the 34-year-old Van Heerden, his next bout will be a “mega-fight” this summer. Hearn isn’t saying who the opponent will be for Conor, but they want one of these names:

As far as British boxing fans go, Benn fighting Brook or Khan would be a smaller “mega-fight” with Conor getting a career-high payday consisting of millions. Obviously, Benn wouldn’t be capitalizing on his famous last name being the son of British boxing great Nigel Benn.

A true mega-fight for Benn would be against the likes of Errol Spence Jr or, Terence Crawford Keith Thurman.

Those guys are relevant fighters, and there would be a lot of interest from fans in watching Benn tangle with one of those guys, but not so much from the list of names that he’s mentioning.

“I promise you that if Conor Benn gets through Saturday night, you’re going to see him in a mega fight in the summer,” said Hearn to the DAZN Boxing.

It doesn’t matter that Conor has never competed for a world title during his six-year professional career, having “Benn” as his last name makes him popular in the UK.

“It’s my first southpaw as a pro. He’s going to present certain struggles and he’s going to be challenging, but I have too much firepower,” said Conor Benn to Matchroom Boxing about his fight against Chris Van Heerden this Saturday night on DAZN.

“They’re difficult and if I had a choice, I’m not a fan of southpaws,” said Benn. “But I believe I’m too strong, and that when I land, it’s ‘good night.’ I think I’m coming into my strength now.

“My team has gotten me to world level, and we’re going to get the world title. That’s the end goal for me.

“Imagine me winning a world title. It’s so close right now. It’s right there, and I cannot afford of getting in the way of me and that world title,” said Benn.

As long as Benn wins on Saturday, Hearn will work his magic to get one of the fighters on the above list for his next fight in the summer. Khan or Brook might be unrealistic due to the purse requirements.

The 34-year-old Mikey works with Hearn and is coming off a loss to Sandor Martin last October, and he’d likely take the fight with Benn if Hearn throws a few million his way.

Given how small & old Mikey is now, it would be a fairly easy fight for Benn. Moreover, Benn would gain more attention worldwide if he faces Mikey than if he were to take on British fighters Brook or Khan.

“No stone left unturned, April 16th, let’s get it,” said Hearn. You’ve become a little bit of a superstar, haven’t you? You’ve emerged as one of the hottest properties,” said Hearn in smothering the still untested Benn with compliments.

“It does feel that way, but it’s so quick how the changes have happened,” said Conor Benn. “It’s like from prospect to contender to now being where I am at the world level.”

“We see your social and digital numbers are HUGE as are your viewing figures,” said Hearn about Benn’s ratings for his fights. “But even across social, it’s kind of like your era.”

“The best part about it for me is I don’t have to be out of character,” said Benn. “I don’t have to play a villain or play a hero. I’m just who I am. I don’t claim to be anything that I’m not.

“I am who I am. My career has been a blessing, but it’s very rare, as I said in another interview, you get someone in the spotlight come from being a terrible fighter. I know you disagree,” said Benn.

Hearn isn’t doing Benn any favors by blowing smoke up his tailpipe by referring to him as a “superstar.” Unless that word no longer means anything, it’s not fair to true superstars for a prospect like Benn to be called a superstar.

He’s never fought anyone good during his six-year professional career, and it’s completely obvious that Hearn is feeding him exclusively old-timers, shot beyond belief. 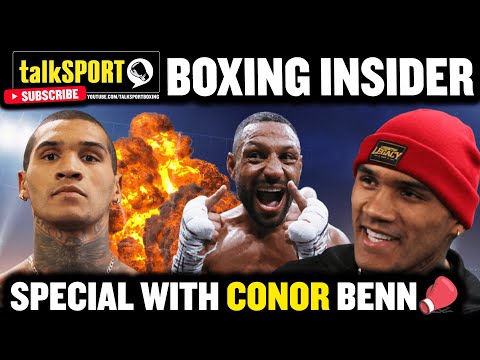 
« Erickson Lubin vows to bounce back from loss to Sebastian Fundora