By Ken Hissner: At the First Direct Arena, Leeds, Yorkshire, UK, over DAZN Eddie Hearn (Matchroom Boxing) presented in the Main Event the rematch with former IBF Super Bantamweight and current IBF World Featherweight champion Kiko Martinez in a war getting upset and losing his title to former IBF Featherweight champion Josh “The Leeds Warrior” Warrington by stoppage in the seventh round before a wildly cheering crowd behind the new champion. 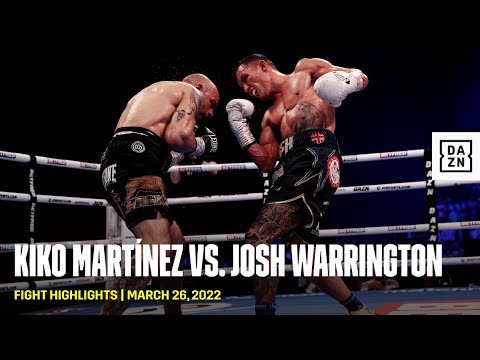 In the first round, both fighters went at it until a right from Warrington on the chin and down went Martinez for an 8-count from Referee Marcus McDonnell.

Upon rising, Martinez, out of a clinch, hit Warrington, receiving a warning. Martinez was cut on the left eyebrow. It was more of Warrington getting the better of it in the second round, but in the third, Martinez bleeding from the eyebrow, nose, and mouth outworked the challenger.

In the fourth round, Warrington had the edge, having Martinez against the ropes, but otherwise, Martinez was the aggressor; with blood coming down his face, he came back with the heart of a champion to take the fifth.

In the sixth, Warrington used his footwork and hand speed to stay a step ahead while Martinez would throw one punch at a time.

In the seventh round, Martinez landed a right on the chin. Warrington came firing back with both hands driving Martinez into the ropes defenseless, forcing referee McDonnell to wave it off. 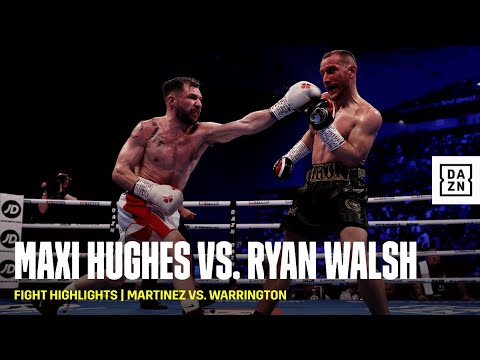 In the third round, a clash of heads caused a cut on the left eyebrow of Walsh, who lost all three rounds. From the fourth through the eighth, Hughes continued to outwork, and outland Walsh as both fought in the center of the ring.

Walsh switched from southpaw to orthodox and back from the sixth but to no avail. He just couldn’t pull the trigger against the accurate counter-punching of Hughes. In the tenth round, Walsh started throwing punches but missed more than landed as Hughes countered him almost at will.

In the final seconds of the eleventh round were the first clinches of this fight for Referee Steve Gray to get involved. Hughes continued pitching a shutout. In the twelfth and final round, Hughes finished with a brilliant performance, not having lost since 2019 to the twin brother of Walsh, Liam.

In the first two rounds, Bridges outworked Roman. In the third, it heated up with both having their moments. From the fourth through the sixth, the action was furious with Bridges having an edge. In the seventh and eighth rounds, Roman had faster hands, but with hands held high throughout, she was being outworked by Bridges. 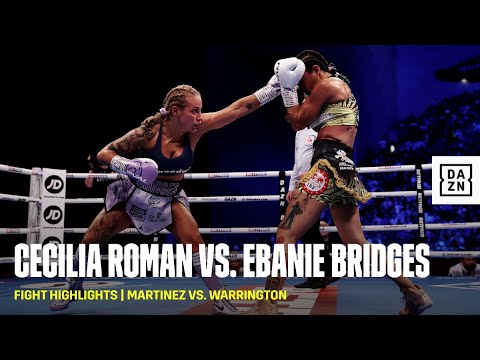 In the ninth round, the light punching Roman landed her best punch of the fight, a solid right on the chin of Bridges, who gave back as much as the champion. In the tenth and final round, the all-action war continued looking like Bridges was on the verge of winning a world title in her second attempt in Roman’s seventh defense. The referee was Bob Williams.

By the second round, Smith had swelling under the left eye of the always coming forward Moylette, who had little offense in return. In the third round, the much quicker of hand and foot Smith continued out, landing Smith though suffering a small cut on his right ear.

A minute into the fifth round, Smith rocked Moylette with a right, left combo knocking him sideways several steps. He gave Moylette a beating up to the bell from that point on. In the seventh round, Smith landed a low left followed by a left on the chin, dropping Moylette. Referee John Latham gave the latter a five-minute rest taking two points from Smith. By the end of the round, Moylette had much swelling under both eyes and bleeding from the mouth.

Smith landed a left on the beltline in the eighth round, with Moylette going to the canvas seeking a DQ. In the tenth and final round, a left from Smith to the side of the head and down went Moylette for an 8-count. Moylette landed a right that Smith countered with a left on the chin, dropping him again. Upon rising, Moylette stumbled toward his own corner as the corner wisely called a halt. 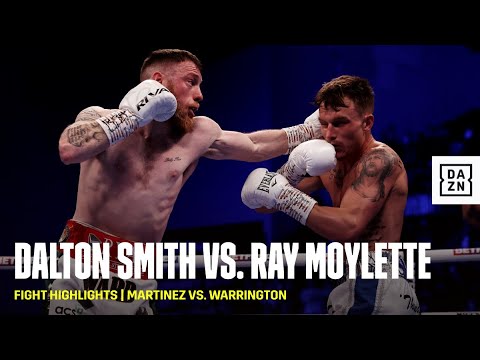 In the first two rounds, southpaw Nicolson with gloves to her side, snapped her jab into the chin of Connolly the entire three rounds. In the fourth round, Nicolson put more into her punches, drawing blood from the nose of Connolly. In the sixth and final round, Nicolson tried for a stoppage, but game Connolly showed a good chin.

The score from Referee Mark Lyson was 60-54, as was this writer’s. 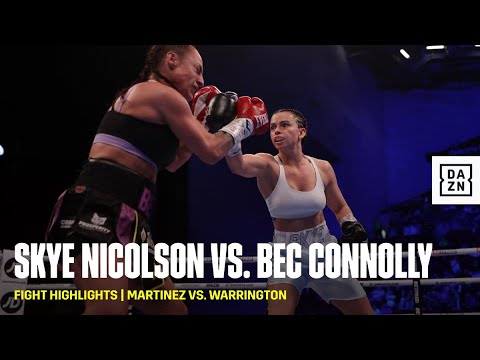