By Mark Eisner: Unbeaten junior middleweight contender Tim Tszyu (21-0, 15 KOs) had to get up off the deck in the first round to come back to defeat #11 WBO fringe contender Terrell Gausha (22-3-1, 11 Kos0 by a 12 round unanimous decision on Saturday night in the headliner on Showtime at the Armory, Minneapolis,

Boxing News 24 had Tszyu winning 11 rounds to 1. He lost the first round when he walked into a right hand from the 34-year-old Gausha, but from that point on, it was one-sided.

Gausha’s best rounds were one through three, but he lacked the power to give him any rounds other than the first. Tszyu was landing the much harder shots, and applying nonstop pressure.

Whatever chance Gausha had of winning the fight, he threw it away by his decision to spend the majority of the fight with his back against the ropes.

Tszyu connected on 236 of 749 punches for a 32% connect rate. For his part, Gausha connected on 58 of 163 shots for a 28% rate. Again, the difference in power between the two fighters made it impossible to give Gausha more than one round. 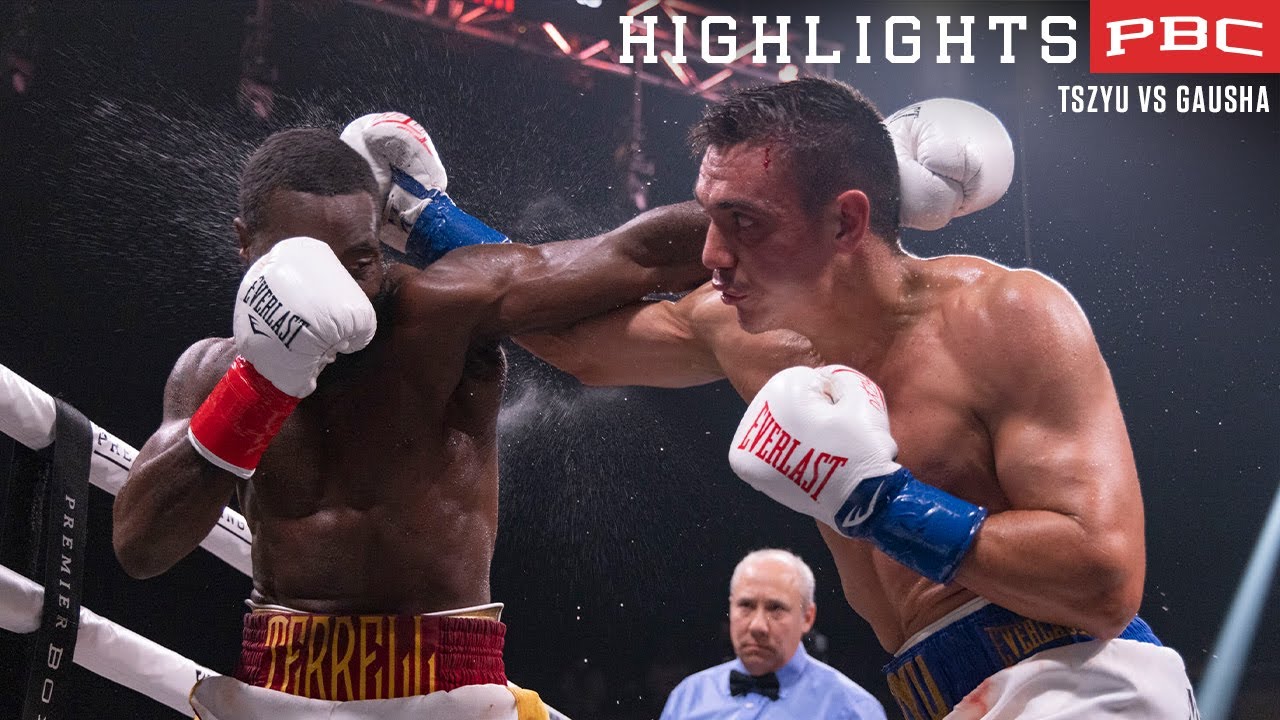 Preview:
Tim Tszyu, 27, is the son of former undisputed light-welterweight champion Kostya Tszyu, who had an incredible career during the early 2000s at 140.

Tszyu vs. Gausha is the main attraction on tonight’s Showtime Boxing card beginning at 9:00 p.m. ET. This is a step-up in competition for the still untested Tszyu.

It’s a critical fight for Tszyu, as if he wins it, he’ll challenge the winner of the May 14th fight between Jermell Charlo vs. Brian Castano for the undisputed 154-lb championship later this year.

“Is this his toughest test to date? Tszyu is facing the U.S Olympian from 2012 when he fought on the U.S Olympic team,” said Chris on Mannix on Boxing about the Tszyu vs. Gausha match on Showtime tonight.

“I’m fascinated about Tim Tszyu because he’s had a pretty good career over in Australia, beating a decent fringe contender in Dennis Hogan. He beat a former champion in Jeff Horn.

“He’s checking the boxes as he moves up the junior middleweight ranks. For me, a good question is, do you look at Tim Tszyu as the real deal?”

“I do; I do look at Tim Tszyu as the real deal,” said Dan Rafael. “We’re going to find out. Terrell Gausha is an experienced fighter with an Olympic pedigree. His only losses as a pro were against good quality guys in Erislandy Lara.

“Although that was an extraordinary unwatchable fight that most of the crowd at the Barclays Center walked out of in the ninth round. Nonetheless, it was a close fight. The other loss [for Gausha] was against Erickson Lubin, another top contender. Those are forgivable losses.

“You ask if Tim Tszyu is the real deal. Go back around three years ago when I made my prospect list at the end of the year, and I had Tim Tszyu at that top 12 or 15 several years ago, having watched many of his fights from Australia because that’s the kind of dork I am. I watched a lot of his fights.

“I’ve seen rapid improvement in his last few fights. He seems to be more confident. His punch selection is outstanding, and one thing that is absolutely uncanny is that if the viewers on Showtime on Saturday if they watched his father Kostya Tszyu fight.

“He’s in a bigger weight class than his father. His father was a 140-pound champion, and Tim is a 154-pound fighter, but he looks very much like his old man.

“When I see him, it makes me feel old because when I was just starting out covering professional boxing, I was covering Kostya Tszyu’s fights when he was a top junior welterweight and ended up becoming undisputed. I voted for him for the Hall of Fame.

“To see his son develop the way he is, I’ve had many conversations over time about the sons of great fathers that don’t necessarily reach the level of the old man.

“I can’t say that Tim Tszyu is going to reach the level of his father, who is a Hall of Famer, who is one of the greatest junior welterweights in boxing history.

“But if anyone has got a chance, I think Tim Tszyu is one of those guys. We’re going to find out on Saturday the answer to one of those many questions when he fights Gausha.

“I kind of like the fact that he’s fighting on Showtime because that’s where Kostya Tszyu had his biggest fights. He was under contract with Showtime in the early 2000s and had the major fights against Ricky Hatton, which he lost at the end of his career, and when he became undisputed against Zab Judah.

“So, I like that aspect of it. He’s an entertaining fighter to watch, and he’s got the last name, which makes it somewhat interesting just because of that. So to me, I’m very excited to watch him, and I’m very happy that he’s coming to America.

“By the way, it’s not as if it’s a one-off. This fight, he’s [Tszyu] already the mandatory to the Brian Castano, WBO belt. He’s supposed to be next up for the winner of the Charlo vs. Castano [rematch], assuming they don’t have another draw [when they fight on May 14th],” said Rafael.

“Yeah, he’s proven everything that he can possibly prove at the domestic level,” said Mannix about Tim Tszyu. “In his last fight, he showed that he can box against a guy in Takeshi Inoue, whose only loss before that was against Jaime Munguia, a top guy.

“He showed power, he showed skill, and now we’re going to see as he takes it to another level,” said Mannix about Tszyu. “If he dispatches Gausha pretty easy, I’ll be really impressed. I’ll say that much.

“You start to look at him, and I think it’s the WBO belt that he’s in line for. Whoever wins out of Jermell Charlo and Castano, do you think they’re going to want to fight him?

“Yeah, maybe because there might be some money in it, but he’s going to be dangerous. I look at him as being really dangerous. I see a lot of the tools.

“Would they [Charlo vs. Castano winner] drop the [WBO] belt or fight him?” said Mannix on the potential of Tszyu being avoided by the Charlo-Castano 2 winner.