Rodriguez was supposed to return to the light flyweight division, but he’s decided to remain at 115 to defend his WBC title.

If Bam’s promoters at Matchroom Boxing can get him a fight against Chocolatito, that would be huge. Eddie Hearn of Matchroom would like to bring Bam Rodriguez back to San Antonio to face Chocolatito or Juan Francisco Estrada.

The 22-year-old ‘Bam’ Rodriguez came in as a late replacement opponent last Saturday night to defeat former WBC 115-lb champion Carlos Cuadras by a 12  round unanimous decision in the main event on DAZN at the Footprint Center in Phoenix, Arizona.

“Bam Rodriguez, the new WBC super flyweight champion. He is now the youngest champion in all of boxing,” said Chris Mannix of DAZN.

“Chocolatito has a handful of an opponent in front of him in Martinez,” said Mannix. “Hypothetically, what would it mean to you? You just went up against Carlos Cuadras.  A fight against Roman Gonzalez, what would that mean to do?”

“Man, that would be a dream fight just like Carlos Cuadras,” said Rodriguez. “Chocolatito, he’s a legend. He’s one of the ones that brought attention to the smaller weights. To be in there with him would be crazy.”

“You need some time off. How much time off are you going to take after 12 hard rounds?” said Mora.

“I don’t know, dog,” said Rodriguez.  “I’m going to see how I feel. I’m going to recover. I’ll probably take a month off. This feels like a dream. It hasn’t even hit me yet,” said Bam Rodriguez.

It would be a risky fight for Bam to fight Chocolatito after just one fight in the 115-lb division, as he might not be ready for that level of a fighter.

Cuadras was pretty well pst his prime, but Roman still has a lot of talent, and might be too much for him.

The World Boxing Council may order Bam Rodriguez to defend against his mandatory Srisaket Sor Rungvisai next, and that’s not going to be an easy fight.

Rodriguez had to use his skills

“Bam, I asked you what you thought of your performance in the ring. You’ve had a little bit of time to marinate on it since you’ve been out of the ring.  What jumps to mind about what you just did?” said Mannix.

“I’m tired as hell, to be honest. It was a  tough 12 rounds, but that’s what I expected,” said ‘Bam’ Rodriguez about his win over Carlos Cuadras. “Around the fifth round, I knew I had to start boxing because Cuadras wasn’t going to get out of there,” said Bam Rodriguez.

“That’s exactly what I was saying on the telecast, the fact that you followed the game plan all the way to the end,” said  Sergio Mora to Jesse Rodriguez.

“I’m sore already.  I haven’t been this sore since, probably never in my whole life,” said Rodriguez. “Cuadras, he gave me the toughest fight of my career, and props to him. I’m happy and there’s a new champion.”

“There is a new champion. You know what really impressed me, Bam, is that you were able to drop a former champion so early,” said Mora.”You didn’t go for the knockout.

“You stayed composed. You showed the discipline and the maturity and that’s you’re the new champion.  Congratulations,” said Mora.

“Credit to [trainer] Robert [Garcia] for that. I  looked over at my corner and Robert said, ‘Relax,'” said Bam Rodriguez about his thoughts after dropping Cuadras in the third.

“If it wasn’t for that, I probably would have tried to finish him.  That when having Robert in your corner comes in handy,” said Rodriguez.

Bam tried to slug with Cuadras through the first five rounds, but he started taking a little too much punishment by the fifth round.

In the fifth round, Rodriguez started boxing more after getting nailed by several hard uppercuts from Cuadras.

Bam was happy to fight Cuadras

“This was a new experience for you in every possible way,” said Mannix. “Fighting for a  world title for the first time after not even fighting for a regional title in your fights before this.

“Going past eight rounds, fighting a fighter on the level of Carlos Cuadras. When you were in there in those first couple of rounds.  What were  you feeling in this being a brand new  experience?”

“Honestly, it felt like that when I first got in the ring,” said Bam Rodriguez. “It felt like it was almost like a dream being in there with Carlos Cuadras.

“Did you have to fight any different than in your first 14 fights?” said Mannix.

“I had to box more.  I’m usually a come forward type of fighter, using my angles, but I had to stick to my jab and just outbox him,” said Rodriguez.

“I talked about this on the telecast about Robert  Garcia is a big part of why so many champions get crowned out of that gym,” said Mora. “What do you think it is? Is it the hard work? Is it the sparring? Is it the game plan?  What makes  Robert Garcia so special?”

“Like  I said, that comes in handy in championship fights,” said Rodriguez.

“You were incredibly confident all week,” said Mannix to Bam. “A  couple of weeks ago, we hailed  Julio Cesar Martinez for taking a fight on short notice to fight Chocolatito.

“You took a fight on really short notice.  in less than a week,  you accepted that fight and jumped in[tofaceCuadras].

“I asked you in the ring,  but I’ll ask you again. What gave you this confidence that you were really for this moment?”

“I  just know that I’m cut from a  different cloth.  You don’t see this that often,” said Bam Rodriguez.

“To be a special fighter, you have to do special things. That is what  I did. This is something special that not many fighters are able to do, and I did it.

“That’s why I say, ‘I’m cut from a different  cloth.’ I  try to tell people, but they weren’t listening. ‘He’s too small, he doesn’t have enough experience,  but here I am the new champion of the world,” said Rodriguez.

“He just repeated what I said. Footwork and the way you box is what’s going to give Cuadras a hard time,” said Mora.

“I expected you to hurt him to the body as well. You were going for that body shot, but Cuadras was doing what he had to do,” said Mora.

“When I was hitting him to the body,  I  saw he was coming back with uppercuts,” said  BamRodriguez. “So, I had to switch it up a  bit, and that’s when I  started sticking to my jab and boxing more,” said Bam.

“How great does it feel for you and your brother [Joshua Franco]to be a world champion?” said Mora.

“We used to talk about this so much. When I got the opportunity the first time in my last fight, I felt a little sad. I wanted to be world champion with my brother,” said Rodriguez.

“That’s why I took this opportunity when it came to seeing what  I had,”  said Bam.

“How much do you lean on your brother in situations like this in asking him what it feels like to be in these types of situations?” said Mannix.

“My brother is my biggest motivation. I looked up to him when he won his world title. I was the happier I’ve ever been in a long time. To do it myself, I’msurehe feels the same,” said Rodriguez.

Cuadras had lost 4  out of his last  7 fights going into his fight with Bam, so it wasn’t surprising that he was beaten.

“You are now a champion at 115,” said Mannix.  “You said that after you win this title, you’re going to vacate In the ring. Now, you’re saying,  ‘Nah, I’m not going to vacate right now.’ What gave you that  change of heart?”

“I felt good making weight. I felt strong in there,” said Rodriguez.”  I think that showed when  I dropped him. I felt I could compete at this weight.”

“There are legacy-defining fights at this weight. Probably more compelling fights at 115 than any other weight  class,”  said Mannix.”Does that factor into your kind of thinking?” 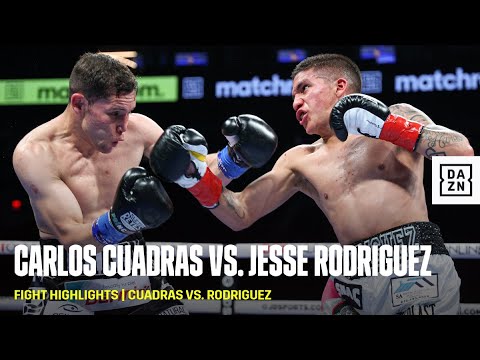