By Jack Tiernan: Dillian Whyte still hasn’t signed his contract to face WBC heavyweight champion Tyson Fury on April 23, and he’s now up against a midnight deadline for the fight to take place.

Fury (31-0-1, 22 KOs) already signed his portion of the contract two weeks ago, and his promoters have been waiting ever since for Dillian to sign.

Whyte is reportedly unhappy with the 80/20 split that he was given, preferring the 55/45 usually available for WBC interim champions.

It’s reported that Whyte wouldn’t take part in the promotion of the fight unless he’s paid extra money. How much is unclear.

Nevertheless, Team Fury has chosen not to grant Whyte’s request for extra money, feeling that he’s already going to be well paid with a purse of $7.3 million and has a chance to add another $4 million to that total if he wins.

There is talk that Matchroom Boxing promoter Eddie Hearn is tabling a deal for Whyte to face Anthony Joshua or Dereck Chisora instead of Fury. The winner of either of those potential fights for Dillian, 34, would then challenge for a world title.

If Joshua faces Whyte, then IBF/WBA/WBO heavyweight champion Oleksandr Usyk, who AJ is supposed to fight next but still hasn’t signed, will face WBC champion Fury for the undisputed championship. This is the fight that fans wanted to see all along, Fury vs. Usyk.

It works out well for Hearn and Joshua, as they dodge a brutal rematch with Usyk and face a more accessible target in Dillian, who AJ already beat in 2015 by a seventh round knockout.

It would be interesting for Joshua to change his mind about taking the rematch with Usyk, as he seemed so dogged determined to take that fight weeks ago.

However, the fact that Joshua still hasn’t signed for the Usyk fight betrays his inner-thinking process, considering if he wanted the rematch with the crafty former undisputed cruiserweight champion, he would have signed for the fight ages ago.

It makes sense for Hearn for Joshua to fight Whyte because that gives both fighters an out to avoid likely career-ending defeats. Joshua can no longer absorb any more losses to remain as a superstar at the top of the heavyweight division.

The money that Joshua will make fighting Fury will be tremendous, but only if he avoids another loss to Usyk. Whyte will make a lot of money fighting Joshua but still likely lose due to his chin issues.

Mike Coppinger reports that Whyte (28-2, 19 KOs) still hasn’t signed for the fight, which is expected to take place at the Wembley Stadium in London, England.

“Sources: Dillian Whyte hasn’t yet signed his contract an April 23 heavyweight title clash with Tyson Fury at Wembley Stadium in London. The WBC No. 1 contender has until midnight central time (12 hours from now) to sign the contract,” said Mike Coppinger.

“Dillian Whyte,” said Dereck Chisora to Behind The Gloves in picking Whyte to beat Fury if that fight happens. “He’s going to have to work hard, but he wants it; he’s hungry.

“The problem is that when fighters make twenty to thirty million, they’re not hungry anymore. There was only one fighter that was still hungry when he made $100 million, and that was Floyd Mayweather.

“When the rest of these fighters make all this money, they’re not hungry anymore. They just do it for the sake of doing it.

“But when someone is hungry and wants it more like Dillian right now, he’s going to come in and die in that ring that day. He is on Dillian, though,” said Chisora when asked if Fury is overlooking an opponent. 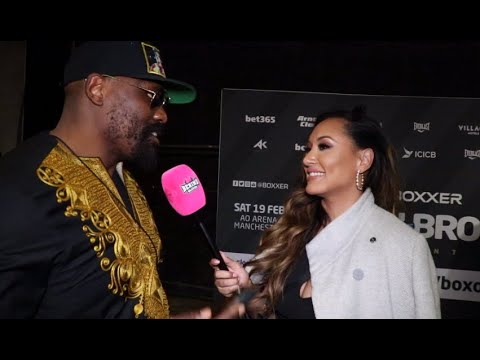 
« Are the Klitschko Brothers of Ukraine Back in the Fight?