Going into the fight, Hearn, who’s Matchroom Boxing promotional company put on the Teofimo-Kambosos event, had hoped of setting up a battle between Teofimo and WBC 135-lb champion Haney next for the undisputed lightweight championship if both guys win their battles.

Now that Teofimo has lost to Kambosos, Hearn wants to set up a fight between the Australian fighter and Haney, provided Devin wins his match against Joseph ‘JoJo’ Diaz Jr. next Saturday, December 4th in Las Vegas.

Hearn will have a lot of competition to try and get a fight against Kambosos, though, as Ryan Garcia has already called the Australian out. Likely, WBA lightweight champion Gervonta ‘Tank’ Davis and Vasily Lomachenko will call him out as well.

Additionally, Teofimo may choose to ask for a rematch, which would be significant given the way he was outworked and beaten up by Kambosos.

“He was brilliant, Kambosos. He showed so much bottle, and in the tenth, he was gone,” said Eddie Hearn to iFL TV on Kambosos’ win over Teofimo Lopez. “He came back and won the eleventh, won the twelfth, and I had him winning by two rounds.

“The obvious thing is to fight Devin Haney for all the belts. That’s the fight, but Devin has got to beat Jojo [Diaz Jr] next week. You just had a situation there where the underdog [Kambosos] just won, so Devin has got to be switched on.

“I’d love to work with George [Kambosos] and take him [Haney] to Australia. That’s the dream. They come from Australia and beat Teofimo Lopez to win all the belts. It’s unbelievable.

“George looked gone in the tenth but then came back and won the eleventh and the twelfth. I think it was the biggest win for an Australian fighter of all time,” said Hearn of Kambosos’ improbable upset 12 round split decision win over Teofimo.

“He’s [Haney] is going to get Tank [Gervonta Davis] or whoever. Everyone is going to want to fight him [if he beats Joseph ‘JoJo’ Diaz Jr on December 4th]. They’ll think they can beat George Kambosos.

“Listen, the kid [Kambosos] is going to make a fortune. He’s cracked it, and good luck to him, but hopefully, it’s the Devin Haney fight. Hopefully, he can win the final belt, and he believes he can win that. We’ll do it in Vegas, or we’ll do it in Sydney [Australia], it doesn’t matter. 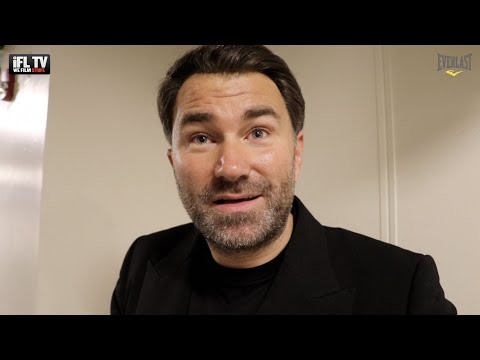