Mikey Garcia vs. Sandor Martin contested at 145-lb catchweight on Oct.16th on Dazn 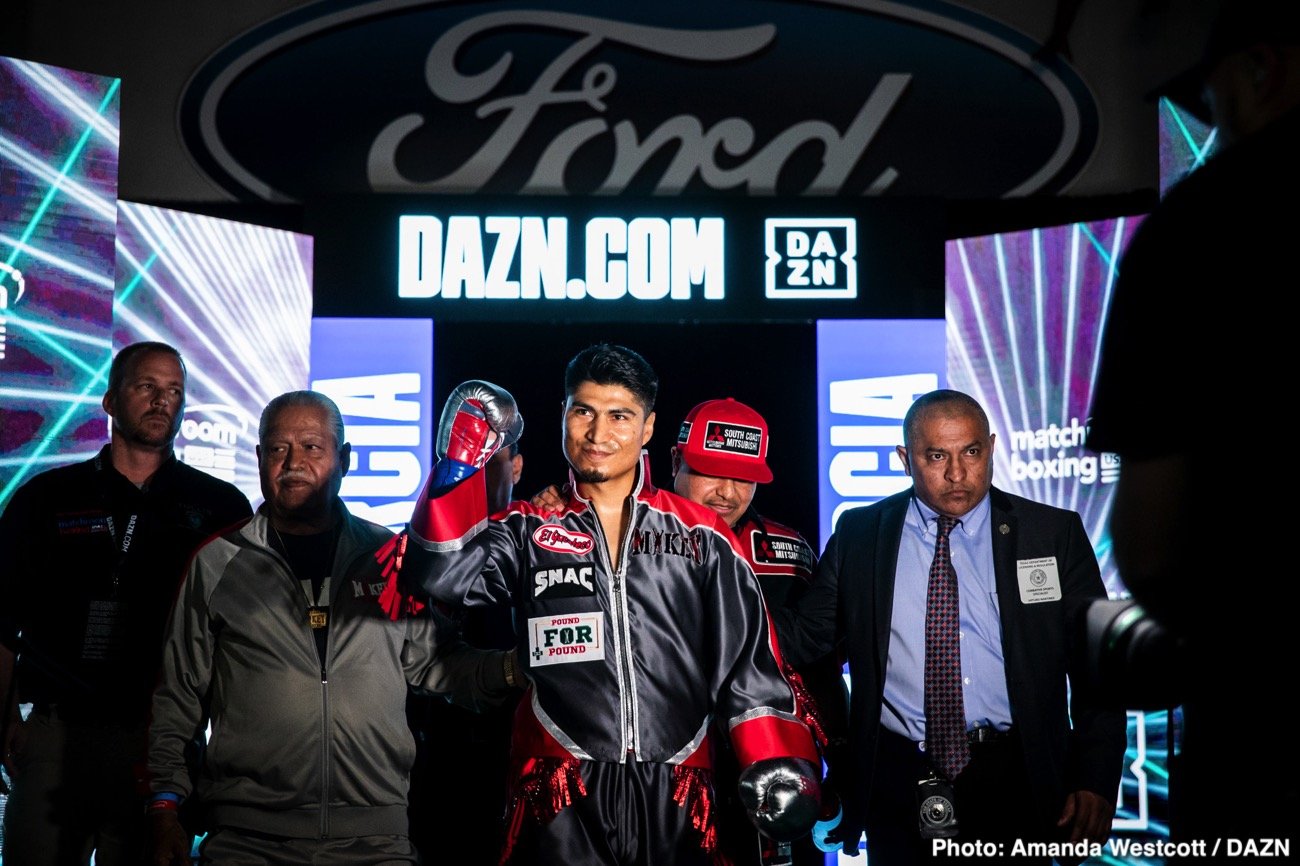 By Dan Ambrose: Former four-division world champion Mikey Garcia (40-1, 30 KOs) will be facing obscure light welterweight fringe contender Sandor Martin next month on October 16th at a catchweight of 145 pounds in the headliner on DAZN, possibly in Fresno, California.

There had been discussion of Mikey fighting former WBA 140lb champion Regis Prograis, but that fight couldn’t happen.

According to Chris Mannix, the money offered for the Mikey-Prograis fight didn’t even match the whopping $7 million that Mikey was given for his tune-up last year against Jessie Vargas DAZN.

Prograis wouldn’t be a tune-up, though, and it’s understandable why Mikey wouldn’t fight him if his pay would be nowhere near what he received for his match against Vargas.

With that said, DAZN arguably grossly overpaid Mikey for the Vargas fight by giving him $7 million for a non-relevant welterweight.

Five years ago, Vargas held the WBO 147-lb title for a short while after beating Sadam Ali, but he’d done since. Vargas lost his WBO title to Manny Pacquiao in 2016, and his career has slid into mediocrity since.

Will DAZN give Mikey the same $7 million that he got in the Jessie Vargas fight, or will they offer considerably less, forcing him to make a decision. How long will DAZN want to see Mikey fight tune-up opposition, though?

Maybe it’s good thing that Mikey doesn’t fight Prograis because he would have likely lost to him. We saw Mikey get thrashed by Errol Spence, and he took a lot of punishment in his win over Sergey Lipinets in 2018.

Prograis is on another level than Lipinets, which tells where Mikey is at. He doesn’t 140, that’s for sure, and definitely not 147. hat fight was arguably the toughest of Mikey’s career at 140, and he looked terrible.

There’s no explanation for why a catchweight is needed, but Dan Ambrose believes it’s for Mikey’s benefit to help him make weight because the chances are high that he wouldn’t be able to melt down to 140 lbs by next month.

Since Mikey last fought 19 months ago in February 2020, he’s blown up in weight, looking chunky and nowhere near 140 or even 147. At times, Mikey appeared to be in the 180s, looking flabby.

In Mikey’s recent haircut videos, his head looks swollen from the weight, and it’s impossible to imagine him melting down to 140. Hence, the 145-lb catchweight. It’ll be interesting to see if Mikey can make that weight.

Staging the Mikey vs. Martin fight in Fresno, California, is a strange choice to place the fight, as that’s not where Garcia’s fans are located. Mikey has been mostly fighting in Las Vegas and Texas since he turned professional in 2006.

Indeed, Mikey’s last fight a year and a half ago was in Frisco, Texas, in February 2020 against former WBO welterweight champion Jessie Vargas. Sandor Martin is from Spain, so it doesn’t help to stage his fight in Fresno because his fans aren’t going to be able to make it to that area of California any easier than if the fight were staged in Las Vegas or Texas.

Fresno is where the recently beaten former WBC/WBO light welterweight champion Jose Ramirez fights. That’s where his huge fanbase is located, but not where Mikey’s is.

Placing the fight in that area would be good if Ramirez was on the card, but he’d be the main event if he were fighting. Moreover, Ramirez is with Top Rank / ESPN, so he’s not fighting on DAZN.

Interestingly, DAZN is allowing Mikey to take another tune-up fight, considering that his last fight against played-out Jessie Vargas (29-3-2, 11 KOs) was also thought to be a tune-up.

For the fans that believe that Vargas was an excellent opponent for Mikey, the fact is he wasn’t ranked in the top 15 at 147.

Also, Vargas’ record in his last four fights going into the match with Mikey was a lowly 2-1-2, with the draws coming against Adrien Broner and Thomas Dulorme.

Broner is completely shot, and Vargas was lucky to get a draw against him because he appeared to lose in the eyes of many boxing fans. Vargas was not a top-level welterweight opponent for Mikey.

He was a gimme, and it was a tune-up. A non-tune-up fight would have been Mikey facing Shawn Porter, Danny Garcia, Vergil Ortiz Jr., or Jaron Ennis.

Mikey fighting any of those guys would have been a certain loss for him. He’s not capable of beating those kinds of guys in Ambrose’s estimation.

In other words, we’d get the same results for Mikey as when he fought IBF welterweight champion Errol Spence Jr in 2019.

Spence beat Mikey with ease, staying in the first great and having one of the easiest fights of his career. That’s not to say Mikey is a terrible fighter because he’s not.

He doesn’t belong at welterweight, as his best weight class would be at 135. For some reason, Mikey left that division when he had the opportunity to fight Vasily Lomachenko.

Some boxing fans believe Mikey chose to leave the 135-lb weight class so that he could duck Lomachenko.

It does look strange that Mikey chose to leave the lightweight division when he was being pressured to fight Lomachenko.

It would have been a massive payday for Mikey, but on the flip side, it likely would have turned out bad for him with Lomachenko scoring either a knockout or a one-sided 12 round decision.

Surprisingly, DAZN is letting Mikey fight Sandor Martin in the main event on October 16th because this guy is not only an unknown to the casual and hardcore boxing fans, but he doesn’t rate to be used as a tune-up.

Martin’s wins have come against solely unknown opposition during his 10-year pro career. The only recognizable name on Martin’s resume is Anthony Yigit, who soundly beat him by a 12 round unanimous decision in September 2017.

Yigit is a decent fringe contender at 140, but not a great talent, as we saw recently with him getting knocked out in seven rounds by Rolando ‘Rolly’ Romero last July.

If Martin can’t even beat Yigit, why is he being used as a tune-up opponent by Mikey in the main event on DAZN on October 16th? Mikey might as well be fighting Yigit if he wants a tune-up.

“Sources: The Mikey Garcia-Sandor Martin bout – contested at a catchweight of 145 pounds – is likely to land in Fresno, California, where Jose Ramirez has drawn sizable crowds.DAZN will stream the Oct. 16 event,” said @MikeCoppinger.


« Dillian Whyte vs. Otto Wallin on October 30th in London