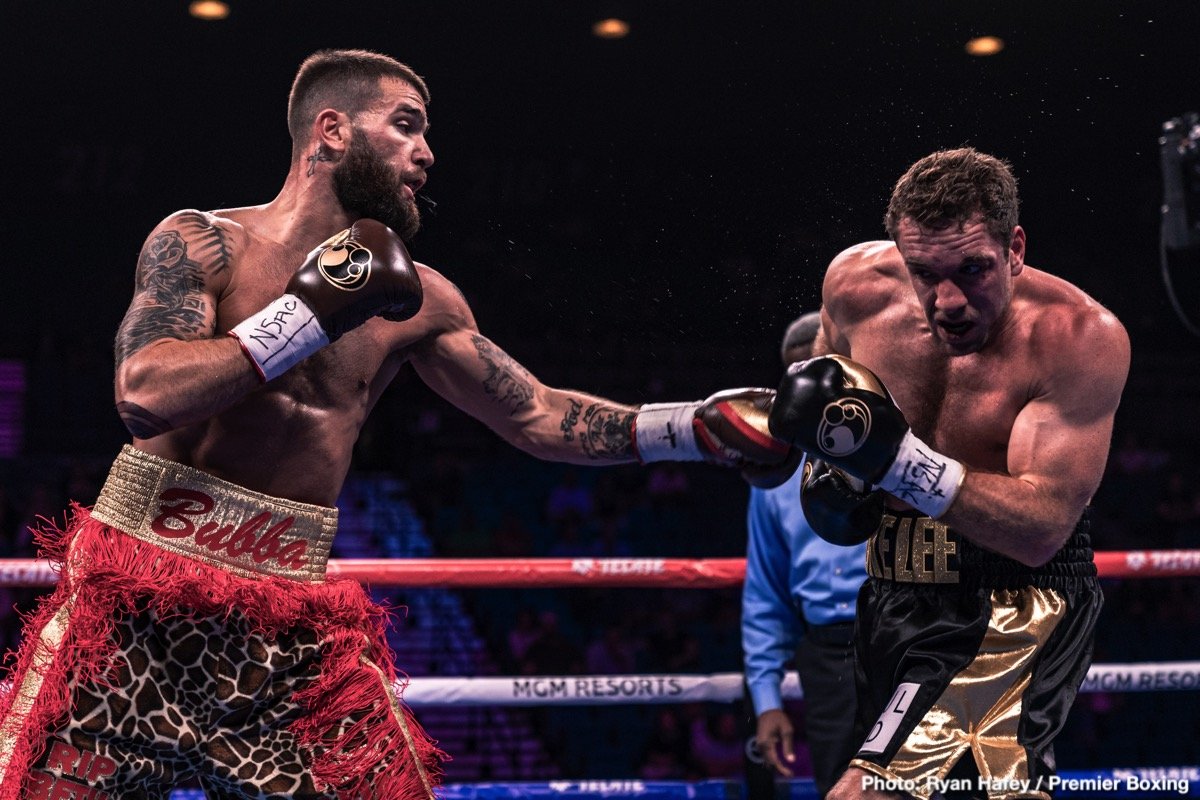 By Sean Jones: Caleb Plant has revealed his secret weapon in retired former world champion Andre Ward to assist him in defeating Canelo Alvarez on November 6th. It’s a bit late for Plant (21-0, 12 KOs) to be making this move to add Ward as one of his coaches.

Plant is Billy Joe Saunders 2.0 in the cardio department, and Canelo will wait until he gassed around the midpoint of the fight and then jump him.

Hopefully, Ward is aware of Plant’s stamina problems and can develop a strategy to keep Canelo off him in the last six rounds. Basically, Plant is a six-round fighter when he’s facing opposition that pushes a fast pace the way Canelo will be.

Once Plant reaches the sixth round, he’s going to need a good pair of sneakers to help him run around the ring.

Dre has an excellent boxing brain, but he’s got to realize that Canelo and his eagle-eyed coach Eddy Reynoso chose to unify the 168-lb division because they felt that all champions were flawed, including Plant.

He’s not the worst of the champions that Canelo will have fought, but he’s not far off from the likes of Billy Joe Saunders, Callum Smith, and Rocky Fielding.

It’s fair to say that if David Benavidez were one of the champions holding a belt at 168, eagle-eyes Reynoso and Canelo would have NEVER chosen to try and becometh the undisputed champion in the division. As Ward once said about Canelo, he’s an “opportunist” with the way he picks out vulnerable fighters rather than taking real risks.

In other words, Ward has got his work cut out for him because Canelo and Reynoso know they can beat Plant. Again, they wouldn’t have picked the 168-lb division to try and unify if they weren’t certain that they could beat all the champions.

Is it too late for Ward to help Plant?

Plant should have added Ward to his team a long time ago to have a shot at beating Canelo. November 6th is two months away, and that’s not much time for Ward to pass on all the information that Plant will require for him to beat Canelo.

If Plant was a computer, he could download the information that Ward wants to impart to him, but unfortunately, he’s human.

Ward was an excellent fighter during his 13-year pro career, but it remains to be seen if he’s got the ability to coach Plant to victory over a talented guy like Canelo.

Some of the stuff that Ward will teach Plant won’t help him because there’s nothing Dre can do to make him tougher. I mean, if Plant lacks the toughness to go to war with Canelo, he’s going to get knocked out no matter how many things he learns from Ward.

We saw how Plant fell apart physically and mentally in the championship rounds Jose Uzcategui in their fight in 2019. In the first half of the fight, Plant was fine when he was at full strength.

But after Plant gassed out in the sixth round, Uzcategui started putting hands on him, marking him up, and he was shaken up. Obviously, Uzcategui is a good fighter with excellent punching power, but it’s a bad sign that he could do that to Plant.

When we see David Benavidez face Uzcategui on November 13th, we’ll get a chance to compare his performance to that of Plant. Of course, by then, Plant will have already fought Canelo, and we’ll know if he’s the real deal or not.

Ward can’t help Plant with his poor cardio. That’s something he’s stuck with, and it’s not likely to change no matter how much training on the track he does.

What can Ward do about Plant’s poor stamina?

Plant is one of those guys that will always struggle with his cardio, and that’s what Canelo will be counting on. I hate to say it, but Plant has the cardio of a big weightlifter type of person who is out of breath just walking across the weight room floor. 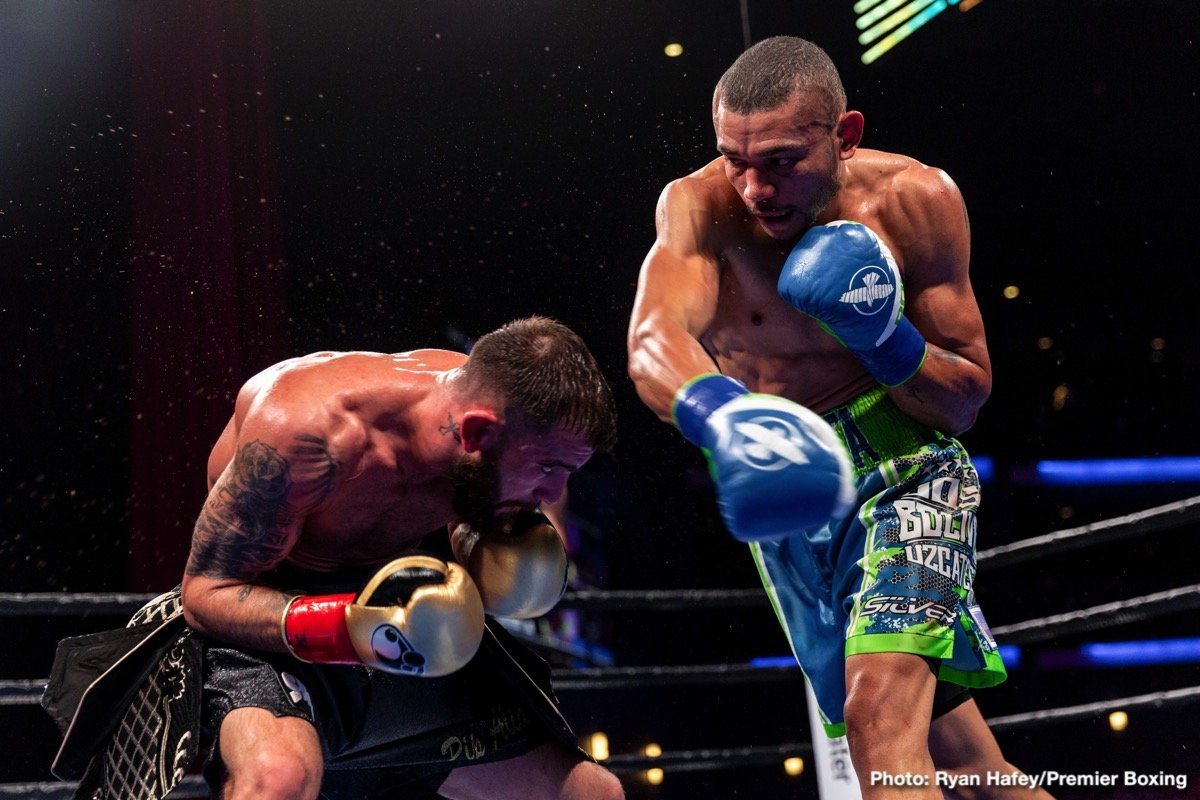 In Plant’s fights, you see him taking big gulps of air after just a few rounds and looking uncomfortable when he starts getting hit back.  What can Ward do about that?

Sean Jones saw a video of Plant in a street fight against a big guy, and he was stressing out badly and totally out of breath.

Even though the person that Plant was fighting on the street clearly didn’t come from a boxing background, he had Caleb looking nervous. Sadly, you know how it ended? Plant ran away from the guy, and he was getting trash-talked as he fled.

The stress that Plant showed against that anonymous guy in the street fight is the same as what we saw in the championship rounds of his fight against Uzcategui.

If Plant couldn’t keep it together against Uzcategui and in the street fight, how will he react when Canelo’s bombs start being thrown? Plant can’t run and expect to win the fight because he’s facing the biggest star in North American boxing in Canelo.

The judges aren’t going to give Plant the decision if he spends the entire second half of the contest on his bike.

Get Plant on the track

I’d like to see Ward having Plant work on some 200 & 400-meter sprints during his workouts. Get him out on the track and have him run six to ten 400 meter sprints. I’ve seen Plant run, and he’s slow. Ward has got to help him build up that wind.

I’d have three people run with Plant in the sprints, stationing them at the 100 meters and 200-meter mark to help push him. If Plant runs the 400 meters alone, he won’t run hard compared to when you’re racing someone.

More experienced fighters like Erislandy Lara and Gennadiy Golovkin had a full training camp to prepare for Canelo, and they still couldn’t beat him. For a fighter with no experience and terrible stamina like Plant, he’s going to be up the creek without a paddle on November 6th.

Josh Warrington ready to move on from Mauricio Lara »