By Matt Lieberman: WBO welterweight champion Terence Crawford is still waiting for negotiations to iron out a fight between him and his mandatory challenger Shawn Porter for October or November. Crawford (37-0, 28 KOs) says his promoters at Top Rank are still negotiating with Porter’s management at PBC to get the deal done.

If not, then it’ll go to a purse bid.  The fight will happen, says Crawford, but it’s just a matter of whether it goes through the purse bid process or not.

Terence, 33, has one fight left on his contract with Top Rank, and he’s not sure what happens next. If he leaves them, he’ll have many options to sign with Matchroom Boxing, PBC, Golden Boy, or one of the other promoters out there with deep pockets.

“Yes, but it’s hard to give an actual answer, being that there’s no contract being signed,” said Crawford to The Fight Game with Teddy Atlas when asked if he’s fighting Porter next.

“PBC and Top Rank haven’t come to an agreement yet, so I guess it’s going to go to a purse bid.

“After the purse bid, it’s going to get secured, but right now, technically, nothing has been signed, and I’m just waiting to get the information on the date.

“That’s accurate,” said Crawford when asked if he has one fight left under his contract with Top Rank.

“You know me; you never know what the future will hold. Right now, I’m with Top Rank; that’s my promoter.

They’ve been promoting me most of my whole career. You never know,” said Crawford on whether he’ll finish his career with Top Rank.

Terence on being avoided

“After I accomplished my goals, it felt like I was stagnant and shelved from fighting these other top fighters because I was such a threat,” said Crawford. 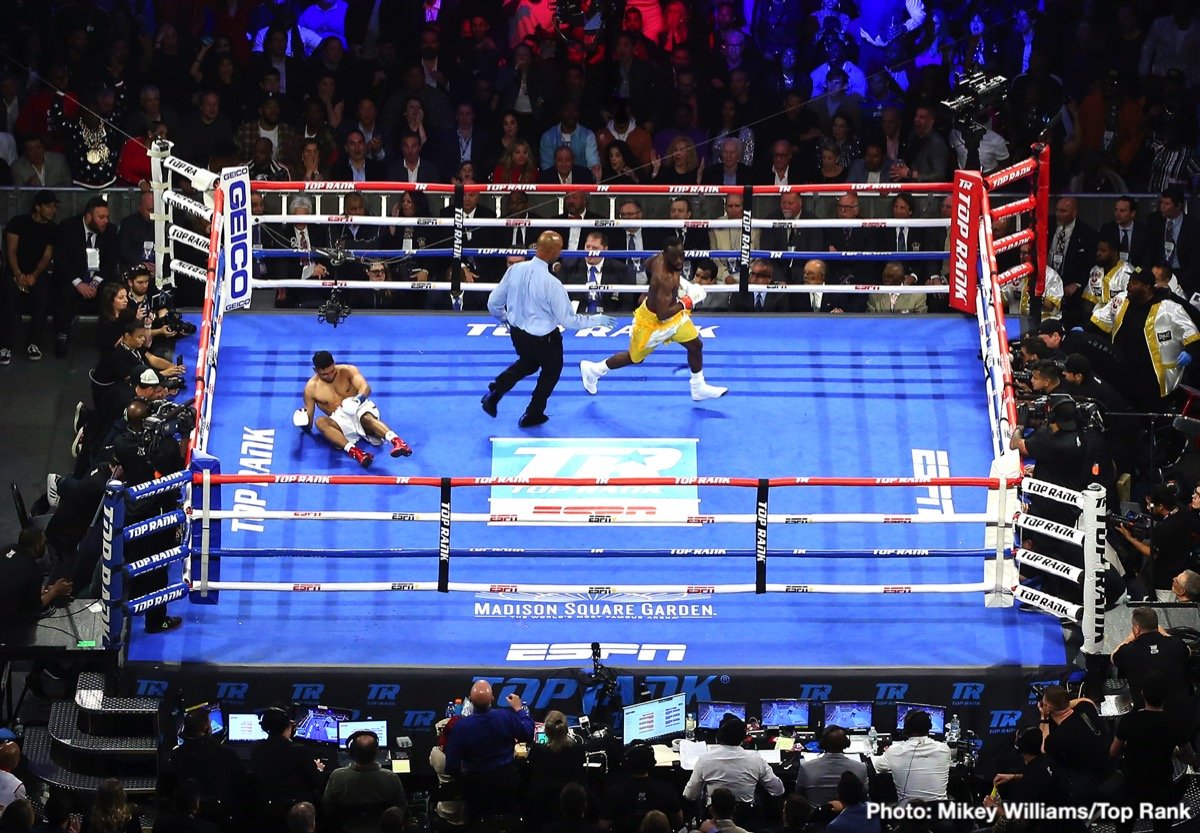 “What they did was say, ‘We’re just going to wait him out because he’s not part of our side.’

“I never heard someone say ‘he’s on the wrong side of the street’ until it came to Terence Crawford. So if I were to retire tomorrow, I’d be happy with my career because I’ve done a lot in the sport of boxing.

“It’s very frustrating at a point, but at another point, I know the business side, they’re [Premier Boxing Champions] aren’t going to let me come over there and beat one of their champions just to bring the belt back over to Top Rank.

“Just like Top Rank isn’t going to let them come over and beat one of their champions and take it back over to PBC if they had a whole stable of welterweights.

“So one part of me gets frustrated, but another part of me says, ‘Okay, it’s business, I understand it.’

“So I sit back and fight the fights that are in front of me and keep looking spectacular and keeping putting my stamp down as the best fighter in the world,” Crawford said.

When you have the kind of talent that Crawford possesses, it’s normal for a fighter to be avoided. It wouldn’t be that way if Crawford were a huge PPV star, as his opponents would get enough money for them to be willing to risk taking a loss.

“I would have had to say that it would have been Pacquiao and Spence. Them two,” Crawford said when asked if there’s one fight that he wants before he retires.

“Pacquiao, I’ve been in line to fight him since 2015 after I beat Dierry Jean. After every fight, I had to pass this torch to go to the next level, but I felt like I was being strung along with the promises of fighting Manny Pacquiao.

“Granted, the last time me and Pacquiao were supposed to fight, it was very close. It was just signing the contract, and then him and Spence signed.

“That was a heart-breaking moment for me. But at the same time, I was happy for Errol Spence because if he beat Manny Pacquiao, it makes our fight much bigger. Those two fights were on my priority list.

“You look at Floyd Mayweather, but Floyd isn’t fighting these young, undefeated hungry lions,” said Crawford on whether Mayweather is fighting at Pacquiao’s level now.

“I think we can get that fight after we win or next fights,” said Crawford when asked about the possibility of fighting Spence.

“To me, it’s just negotiations, but behind closed doors, everyone feels they deserve this and deserve that.  So that’s where the feud begins,” said Crawford.

At the time of this interview, IBF/WBC welterweight champion Errol Spence Jr hadn’t suffered an eye injury, so it’s unknown whether he’ll be able to come back from it to one day fight Crawford.

Pacquiao and his management aren’t talking about wanting to fight Crawford, unfortunately. As far as Crawford goes, he might be out of luck for fights against either of these guys.

They want Pacquiao to take care of WBA welterweight champion Yordenis Ugas on August 21st and then look to face Spence in December if his eye is healed or in early 2022.

“It’s so hard to bet against Fury with the skill set he has and the illusiveness, his fighting style, and how big he is, it’s very hard, but you definitely can’t count Wilder out with that dynamite in his right hand,” said Crawford when asked to pick a winner in the trilogy match between WBC heavyweight champion Tyson Fury and Deontay Wilder on October 9th.

“He’s been looking tremendous in camp, but as we all know, you can look good on the mitts and the bag; it’s how you perform in that ring. So, I’m leaning a little bit towards Fury, but at the same time, you can’t count Wilder out,” said Crawford.

The save pick is WBC heavyweight champion Tyson Fury beating Deontay Wilder in their trilogy match on October 9th. At this point, we need to wait and see if that fight takes place on that date.

Fury has had terrible luck lately in setting up fights for last year against Agit Kabayel, Anthony Joshua, and Wilder. The Gypsy King has whiffed on three consecutive fights.

As long as there isn’t another illness or perhaps an injury, Fury and Wilder should be able to fight on October 9th.

“Joshua has a tough fight in front of him as well,” Crawford said of Anthony Joshua’s match against Oleksandr Usyk on September 25th. “That’s a 50-50 fight. Usyk is a tremendous talent,” said Crawford.

Usyk has the talent, mobility, ring IQ, and more than enough pop in his punches to defeat Joshua and upend his career, perhaps permanently.

The promoters for IBF/WBA/WBO heavyweight champion Joshua are confident enough in his ability to beat Usyk for them to be letting this fight go-ahead for September 25th.

If Usyk pulls off the upset, Matchroom promoter Eddie Hearn could regret letting AJ take this fight. There would be a big decision that would need to be made at that point on whether to let Joshua face Usyk a second time or recognize that it’s too risky to chance it for a rematch.

Hearn said five years ago that he believed that Joshua would carry the heavyweight division on his back for the next ten years. If Usyk defeats Joshua, Hearn’s prediction will have been spoiled.

Jamel Herring and Shakur Stevenson to fight on Oct.23 in Atlanta »