By Max Schramm: Oscar De La Hoya posted some video of him working out on Friday in getting ready for his comeback fight against Vitor Belfort on September 11th at the Staples Center in Los Angles, California.

The fight, which has two-minute rounds, will be broadcast on FITE.TV. De La Hoya had a strange look in his eyes when he stared at the camera, not anything, appearing to be lost in thought.

De La Hoya must win and look good for him to boxing fans excited about a fight between him and Floyd Mayweather Jr. That’s who Oscar says he’s going to call out after he fights twice.

De La Hoya wants to battle the 44-year-old Mayweather Jr in a rematch, and he believes it’ll get a lot of fans excited about seeing the two legends of the sport.

Mayweather Jr hasn’t committed to fighting De La Hoya yet, but he may, as long as Oscar doesn’t look too good against Belfort.

Suffice to say, if De La Hoya puts on a devastating performance on September 11th, Mayweather won’t agree to fight him. Mayweather stopped fighting boxers after his win over a past his prime Andre Berto in 2016. 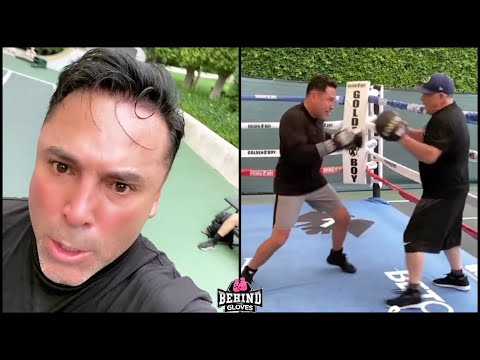 Mayweather had hit it big in his previous fight in 2015 against Manny Pacquiao, making many millions from that fight. Whatever hunger that Mayweather had for fighting against elite-level boxers disappeared after his bout against Pacquiao.

Why are the rounds only 2 minutes?

It would be interesting to know if it was De La Hoya’s idea to have the rounds only two minutes long rather than three. Two-minute rounds are what we see in women’s boxing, not men’s.  Oscar should be able to change the fight to three-minute rounds if he wanted to, but thus far, he hasn’t.

Some boxing fans see that as disappointing that De La Hoya is choosing to fight an eight-round bout with each round only 2 minutes.

The event will be a professional boxing bout, not an exhibition, testing the fighting skills and will of these two greats in combat sports history, competing in the light heavyweight division in a scheduled eight-round bout.

If this fight wasn’t the main event on PPV, you could give De La Hoya a pass, but that’s not what we have here. Fans are going to be paying to watch De La Hoya and Belfort fight on PPV, and they’re going to want value for their money. 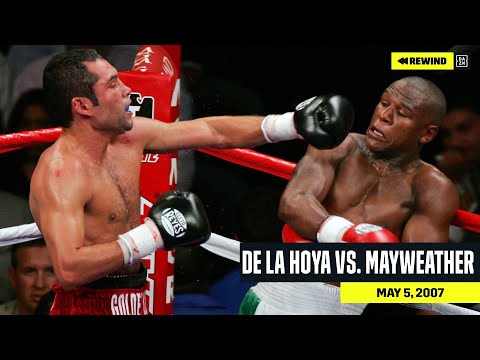 Other than the odd-looking staredown at the camera that De La Hoya did at the start of the video, it looks like he’s dropping weight rapidly for his eight-round fight with the 44-year-old Belfort. De La Hoya’s foot speed is looking great right now.

Oscar mobility could be key for him in this fight because we don’t know how well he’ll hold up to the hard shots from Belfort.

If De La Hoya gets hit solidly by Belfort, particularly to the body, he may not be able to take it. Belfort is a lot bigger and stronger than the fighters that De La Hoya fought during his career.

Although only four years separate the two fighters, Befort has been active with his MMA card. He hasn’t been retired like De La Hoya, who last fought in 2008 when he lost to Manny Pacquiao by an eighth-round knockout.

De La Hoya was originally supposed to be fighting the former MMA star Belfort in an eight-round exhibition match, but he changed his mind and made it a real right that will count on the record books.

It’s one thing for a middle-aged fighter to take the weight off to make a comeback, but it’s something different for them to find success. This could be an overreach for De La Hoya coming back at 48. It’s great that De La Hoya is motivated to fight again, but that doesn’t mean he will be able to pull this off.

Belfort obviously isn’t a boxer, but he’s younger, bigger, stronger, and he’s been competing. That gives Belfort a huge edge.