By Sean Jones: Teofimo Lopez Sr says his son Teo will start training this week for his next fight against challenge George Kambosos Jr on August 14th. Teofimo Jr is doing well after a bout with COVID 19 and ready to start preparing for his mandatory defense against Kambosos (19-0, 10 KOs), says Lopez Sr.

Undisputed lightweight champion Teofimo (16-0, 12 KOs) has got to get this fight out of the way with Kambosos to move forward for the lucrative rematch with Vasily Lomachenko.

Lopez Sr says he wants to try and get the Loma rematch done for December. There’s already a ton of interest in the second fight following Lomachenko’s ninth round knockout win over former Teo opponent Masayoshi Nakatani last Saturday night on ESPN+ at the Virgin Hotels Las Vegas.

Lomachenko set the table for the rematch with Teofimo by twice dropping Nakatani (19-1, 13 KOs) en route to stopping him in the ninth in a one-sided fight.

That performance from Loma showed that he’s fully back from shoulder surgery after his loss to Teofimo last October. With the way that Lomachenko fought, many boxing fans are already picking him to defeat Teofimo in the rematch.

It will be up to Teofimo not only to beat Kambosos Jr on August 14th but also to put in the same kind of performance as we saw from Lomachenko.

If Teofimo struggles against Kambosos as he did in his win over Nakatani in 2019, the fans will not give him much of a chance against Loma.

Teofimo to start training this week

“We’re going to start training next week to get ready for August 14th,” said Teofimo Sr to Fighthype about Teo’s title defense against Kambosos Jr.

“We might even make the fight earlier. You never know because Teo is feeling optimistic right now,” Teofimo Sr. continued.

“He’s thinking about taking a vacation to Italy. If he’s optimistic enough to take a vacation, then you know he’s alright,” said Teofimo Sr.

It’s not a good idea for Teo to be traveling to Italy if he’s recovering from COVID 19. That would be a strange move on Teo’s part, particularly if he’s about to start training this week for his August 14th title defense against Kambosos. It sounds like an irresponsible idea to go on vacation while recovering from COVID.

“When I found the fight was off, I trained that night,” said Kamboso Jr to Fighthype after learning that Teofimo had tested positive for COVID. “I’m perfecting my craft and each day I’m getting better and better.

“The thing with him, he’s got COVID and he’s asthmatic as well. He’s not going to get no better. He’s in a worse situation. No one remembers how long the fight took. They remember who became the undisputed champion.

“The father [Teofimo Sr] is an absolute clown,” said Kambosos. “The guy is bozo the clown. His son cost Triller millions of dollars, and you got the nerve to show your face around? That’s the kind of person he is. His mouth is trying to cash checks but his son isn’t going to be able to cash them.

“He can fight Lomachenko. I’m looking forward to seeing the rematch,” Kambosos Jr said. “But guess what? It’s not going to be with any belts. No belts will be on the line.

“Let’s see how good of a fight that is without any belts on the line because I’ve taken everything. It’s pretty sad he’s got that guy representing him.

“How can you be setting up fights when your son is supposedly dying of COVID? You’d think that with Junior getting COVID, senior would have it as well.

“He’s [Teofimo Sr] out and about. He’s at the bar 24/7, every single night until he flew back home. I wouldn’t want to show my face after my son just cost a huge fight,” said Kambosos Jr.

Arum and Teofimo Sr are both on board with putting the rematch with Lomachenko together, and they both believe it’ll be a huge one on ESPN pay-per-view.

Arum is talking about possibly staging the Teofimo-Lomachenko 2 fight overseas, and he says he’s fielding offers. It’s obvious from the way Arum and Teofimo Sr are talking. They view Kambosos Jr as a sure-thing win for Teo.

If they had any doubts about the fight’s outcome, they wouldn’t be planning the Lomachenko rematch. Sean Jones can’t blame Arum and Teofimo Sr for talking up the rematch with Loma because Kambosos is little more than a speed bump for Teo.

The biggest worry about that fight for Teofimo is if he suffers a bad cut, which would make it almost impossible for him to return to the ring to fight Lomachenko in December.

Teo’s rematch with Lomachenko will be without titles, says Kambosos

“Let them have their rematch, but there won’t be any belts on the line. I’m taking all the belts off him,” said Kambosos Jr about the Teofimo vs. Lomachenko rematch that could take place in December.

“He’s got to pay for this. I’m going to make him pay for this,” said Kambosos Jr. about wanting to thrash Teofimo for him messing up their June 19th fight.

Nah, the titles will be on the line for the Teofimo vs. Lomachenko fight alright. Teofimo will have no problems getting past the light-hitting volume-puncher Kambosos Jr. This is a gimme for Teo against Kambosos. 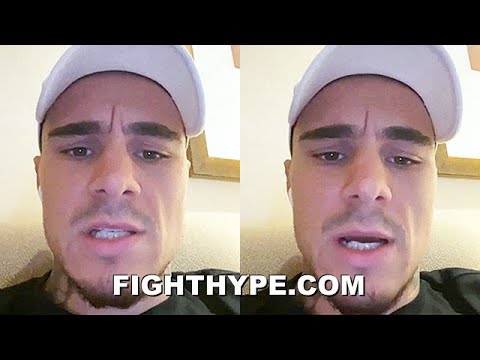 If Kamboso Jr had more size, he might stand a chance of beating Teofimo, but he’s too small in Sean Jones’ estimation. When you compare the size and punching power of Teofimo to Kambosos, the two look like they’re from different weight classes.

Teofimo looks like a short 147-pound welterweight, whereas Kambosos has the size and the punching power of a super featherweight [130].

The lack of size and power for Kambosos is going to put him at a tremendous disadvantage against Teofimo. Besides that, Kamboso Jr lacks hand speed.

We saw that in his narrow victories over the old-timer’s Lee Selby and Mickey Bey. Kambosos Jr went life and death with both of those fighters, which shows you where he’s at talent-wise.

He’s not an elite-level 135-lb contender. Goodness knows why the International Boxing Federation made Kambosos Jr their mandatory at lightweight.

They should have at least had Kambosos Jr fight Masayoshi Nakatani in an IBF eliminator instead of the shot to pieces 34-year-old Lee Selby.

Kambosos Jr is a good self-promoter, but his talent doesn’t match what comes out of his mouth. We’re going to see that loud and clear when Teofimo fights him, and it won’t be pretty.

Hopefully, Kambosos Jr gets a clue afterward and moves down to 130 where his lack of size and power won’t be as much of a hindrance.

Weak volume punchers like Kambosos Jr don’t stand a chance against the top guys at 135, and we’re going to see that when he squares off with Teofimo in August or whenever they eventually fight.