By Dan Ambrose: Devin Haney responded on Tuesday about Ryan Garcia’s comment he made last Saturday about how he would have “slept’ him if he’d been the one inside the ring instead of Jorge Linares.

Haney is angry about Ryan coming out now to say that he would have knocked him out when he had the opportunity to fight him, and he chose not to.

Although Haney didn’t say it, he likely also sees Ryan as having ducked him when he was he earned the WBC mandatory position with a victory over Luke Campbell earlier this year on January 2nd, and he chose not to challenge Devin.

Ryan, 22, obviously saw weakness in Haney with the way he was hurt by Linares (47-6, 29 KOs) in the 10th round from a right hand that he connected with.

That shot took all the fight out of Haney for the remainder of the contest, as he spent rounds 11 and 12 holding onto the 35-year-old Linares so that he couldn’t finish him.

When Linares landed anything hard in the 11th and 12th, Haney showed signs of being hurt. The clinching that Haney used in those last two rounds angered the fan, causing them to boo loudly. 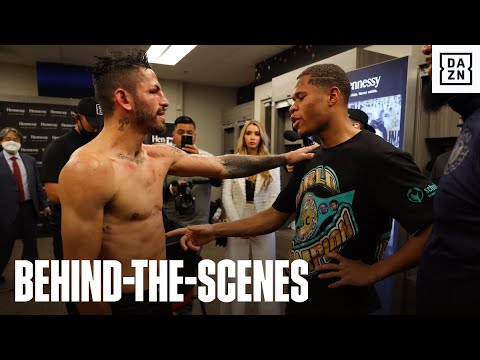 It’s hard to know who to side with for this altercation between Ryan Garcia and Haney. While it’s clear that Ryan did choose not to fight Haney, Linares, Vasily Loachenko, Gervonta Davis, and Javier Fortuna, there’s no mistaking the fact that Devin looked poor in the last three rounds against Linares.

“What I saw in the ninth round was Haney’s punches are not as strong anymore, not as crisp, not as solid anymore,” said trainer Robert Garcia on Robert Garcia Unfiltered on Devin’s performance against Linares.

“Linares did get him in the 10th and probably won the last three rounds. That leaves a lot to talk about where Haney really is.

“Haney did not finish strong, he slowed down a lot, he got stunned a little. The last three rounds, he probably lost, so that says a lot,” said Robert Garcia.


« Gary Russell Jr on Mayweather vs. Logan Paul: ‘It’s making a mockery of the sport’