Gary Russell Jr on Mayweather vs. Logan Paul: ‘It’s making a mockery of the sport’

By Allan Fox: WBC featherweight champion Gary Russell Jr says Floyd Mayweather Jr vs. YouTuber Logan Paul exhibition match is making a “mockery” of the sport of boxing by turning it into a circus.

Russell Jr feels that it looks bad that a YouTuber can leapfrog over real boxers to fight Mayweather and make more money than them.

Boxers work hard to improve their lives, and then they see a YouTuber getting opportunities that they’re not getting. Mayweather has no interest in fighting real boxers at this point in his career because he’s old, slow, and would likely get hurt if he fought an active fighter.

Despite the 42-year-old Manny Pacquiao being just two years younger than the 44-year-old Mayweather, he looks a decade younger and is still fighting at a high level.

Mayweather has gotten old and decrepit, and he would not do well against a real fighter like Manny. Hence, Mayweather is now reduced to fighting YouTubers and selling the mismatches to the public.

Mayweather has been quite transparent this week, letting the fans know that he’s doing “legalized robbery” with his mismatch against the 26-year-old Logan (0-1), who has fought only once as a pro, losing to fellow YouTuber KSI in 219.

The 44-year-old multi-division world champion Mayweather is battling the popular YouTuber Logan Paul in an 8-round exhibition match this Sunday, June 6th on Showtime pay-per-view at the Hard Rock Stadium in Miami, Florida. The event sells for $50 on PPV.

“As a fighter that participates in the sport, I personally don’t like it,” Russell said of Mayweather fighting a YouTuber. “I don’t think Floyd is at any risk. He’s a real. He’s a fighter.

“This guy [Logan Paul] is a YouTuber. Granted, he can get lucky and hit Floyd and hurt him, but the odds of that sh*t is crazy. I don’t care with even the weight division. It won’t matter.

“Floyd Mayweather is a skilled fighter, and he’s going to bring that stuff in the ring with someone [Logan] that has nothing to do, knows nothing about boxing,” Russell Jr said.

Potentially, it’s a bad thing for Mayweather to be putting on his mismatches against YouTubers and former MMA fighters because the product is so inferior.

Mayweather looked like he was fighting in slow motion to carry former UFC star Conor McGregor in their fight in 2017, which was sanctioned professional fight.

It looked blatant that Mayweather was carrying McGregor to ensure that he didn’t totally dominate him. Casual boxing fans don’t want to see one-sided mismatches, particularly when they’re paying to watch it during the pandemic when money is hard to come by for many.

YouTuber boxing “waters the sport down”

“It waters the sport down,” Russell Jr continued about Mayweather and the YouTuber boxing. “They’re doing these exhibitions now, even with Mike Tyson and Roy Jones Jr.

“I was all for that sh*t, but then they said they can’t go for the knockout. I was like, ‘What the f**k, this is boxing. This is a barbaric sport.’ I understand why a lot of fans don’t like it and disagree.

“They weren’t skilled, they signed a waiver to make a little money, and it’s going to come back to bite them in their a**,” Russell Jr said.

The YouTuber boxing and the old-timer exhibition matches definitely are giving the sport a different look. It’s got to be hard for the fighters, who aren’t making the kind of money that the YouTubers Jake and Logan Paul are hauling in for their fights.

Despite the two Paul brothers not being elite boxers, they’re making more money than many of the existing world champions in the sport. It’s letting you know that entertainers are worth more than pure boxers.

Boxing is being turned into a circus

“They’re turning the sport into a circus,” said Russell Jr when told that former NFL wide receiver Chad Johnson is fighting on the Mayweather vs. Logan Paul undercard this Sunday.

“I love the sport I participate in. I’m one of the real soldiers on the battlefield.

“I understand the creativeness of still trying to make some money, but I just can’t with it when these YouTubers are making more money than the fighters you promote,” said Russell Jr in talking about the 44-year-old past his prime Mayweather keeping his boxing career alive by fighting YouTubers.

“That doesn’t make sense. A lot of people got into the sport of boxing because Floyd Mayweather was flashing his money and showing his cars, showing that if you really dedicate yourself and give it everything you’ve got, you can make something of yourself.

“To get to the point of your career where now you’re fighting YouTubers, and now it’s like, ‘What the f*** do we do now? Who do we follow now?'” said Russell Jr about the young fighters not able to follow Mayweather’s path because he’s deviated into circus fights against non-boxers,” said Russell Jr.

With that said, the casual fans understand that the Mayweather vs. Jake Paul and the old-timer fights aren’t elite-level boxing at their finest.

It’s more like a greasy fast food type of entertainment for the fans than a quality restaurant where you know you’ll get an excellent meal.

You got old guys fighting YouTubers and older fighters coming back for a paycheck. Mayweather isn’t that old at 44, but he looks every bit as old as 54-year-old Mike Tyson and 59-year-old Holyfield.

“If I take an exhibition, somebody is going to get hurt,” said Russlel Jr. “I do an exhibition with a YouTuber; hopefully, there are no YouTubers out there that dislike me or whatever.

“If there’s a YouTuber that dislikes me and says they want to fight me, we can make some money.

It’s improbable that any of the popular YouTubers are going to target Gary Russell Jr for an exhibition-level fight. Russell Jr isn’t popular enough for a YouTuber to pick him or a fight.

If Russell Jr was a little bigger and more popular, he might be able to hustle a fight with YouTuber KSI or someone like that, but probably not the Paul brothers. 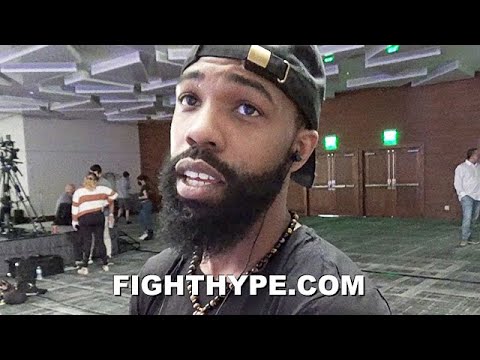