By Jeff Aronow: Promoter Frank Warren says that Tyson Fury won’t sign a site deal for his contract for the unification match with IBF/WBA/WBO heavyweight champ Anthony Joshua (24-1, 22 KOs) until a bank guarantees the money.

It will be a big disappointment for the boxing world if the Joshua vs. Fury fight doesn’t take place in the summer as many of them had hoped.

Currently, lawyers are working on the issue to get this done, but if not, WBC champion Fury (30-0-1, 21 KOs) will be fighting in July in the United States. That’s when Top Rank promoter Bob Arum wants to get Fury out.

Arum hasn’t said who he would match Fury with, but it wouldn’t be surprising if Deontay Wilder winds up as his opponent. Those two originally had a rematch clause from last year, and the mediator was dealing with it.

Fury wants money to be guaranteed

“We’ve got a contract at the moment that Tyson Fury will not sign,” said Warren to Secondsout about the Joshua fight. “One thing in the contract that will enable us to get over the hump are the guarantees.

“What are we four months on? We are where we are. Until we agree to terms, until Tyson Fury, who we’re with, is happy with the terms, it won’t get signed, and he’s not happy at the moment. I don’t know what Anthony Joshua is because we don’t have nothing to do with that.

“Until Tyson is satisfied that the money in that contract is guaranteed by a bank, then it’s not going to get signed,” said Warren.

“That’s the main issue, and hopefully that’ll get addressed. That’s the crux of the matter. That’s probably 85% of what it’s all about,” Warren said.

If Fury chooses to move on, he’s going to be taking a lot of heat from boxing fans, who will say that he didn’t fancy his chances against AJ.

There will be less criticism coming Fury’s way if he takes on a dangerous opponent like Deontay Wilder, Daniel Dubois, or Joe Joyce, but would he do that?

July fight in the U.S a possible backup option

“A couple of days,” said Warren when asked how long before Fury loses patience. “Because he’ll get to the stage where he’ll want to fight. I know Bob Arum in the States is talking about he wants to fight in the States.

“That would be in July, so this has to be settled very, very quickly one way or another. All these things can happen provided that Tyson Fury is happy with the terms and the comfort level he requires is there. If it’s there, it’s a no-brainer.

“They were talking about the 7th of August originally, which was the Olympic and UFC pay-per-view on that night, so that would have been a bit crazy. The 14th, I think everybody has called that day.

“Not until this is done because if it isn’t done, AJ will have to have his mandatory against Usyk. It’s a choice the guys make.

“If they order AJ against Usyk if Tyson and AJ doesn’t happen, and they will order AJ to fight Usyk if he fights Usyk, then the good thing is, Joe [Joyce] will go in as the mandatory challenger,” said Warren.

It’ll be interesting to see who Fury faces if he doesn’t wind up taking his backup option of fighting another opponent in July.

Fury can’t wait around forever for the Josua fight because he’s already been out of the ring for 15 months since his clash with Deontay Wilder in February 2020. 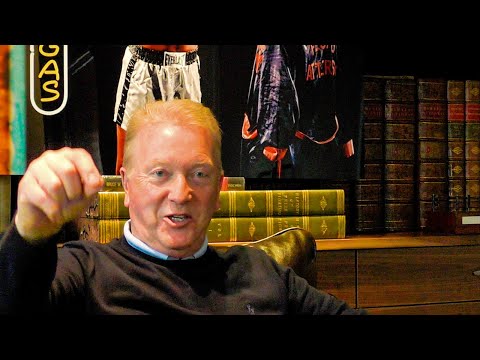 Was Joe Louis or Muhammad Ali the Best Heavyweight of All Time? »