By Brad Slotnick: Teofimo Lopez is targeting “email champion” Devin Haney for his next fight so that he can relieve him of his WBC 135-lb title to become the undisputed lightweight champion.

Teofimo (16-0, 2 KOs) has faced withering fire from the boxing public for his assistance in claiming that he’s the “undisputed” lightweight champion despite him not holding the WBC title.

The belt that Teofimo has, WBC Franchise, is viewed as a ‘fake belt’ by many boxing fans.

It’s a title the WBC created two years ago to give to popular champions who don’t wish to fight their dangerous mandatory challengers.

Despite this view that fans have about the Franchise belt being a trinket title for duckers, Teofimo has continued to insist that he’s the undisputed 135lb champion. It’s made Teo look pretentious, someone that is comfortable masquerading as something that he is not.

“It’s plain and simple; he is the true definition of ‘fake it until you make it.’ The only thing that’s keeping him relevant right now is that fake a** belt.

“I’m the Franchise, so I can mandate that fight [with Haney] next,” Teofimo said about him being able to set up a fight with Haney.

Teofimo still must win his next fight against George Kambosos Jr (19-0, 10 KOs) on June 19th in their headliner on Triller pay-per-view.

That’s not a sure thing win for Teofimo, so it would be a mistake for him to count that as a victory in the win column.

Assuming Teofimo does get past the motivated Kambosos Jr, we could see a Teofimo-Haney fight later this year. The winner of that contest will be the true undisputed champion at 135, and that’ll be a big deal.

We saw how much interest there was from boxing fans in last Saturday’s undisputed match-up between Josh Taylor and Jose Ramirez.

Even though the event was crippled by a poor promotion, it still garnered a great deal of interest from the hardcore boxing fans, if not the casual ones.

“I don’t even know,” Teofimo said when asked his view on how Haney will do against Linares. “We’ll have to see on Saturday. Maybe he’ll [Haney] surprise and maybe he won’t, maybe he’ll show up to the limit he always is.

“He’s a one-dimensional fighter, he’s not a universal fighter. I really want Devin to win this fight because I want his head next,” said Teofimo about wanting Haney.

Devin’s title defense against Jorge Linares (47-5, 29 KOs) this Saturday is far from a sure-thing win for him. That fight is viewed as a 50-50 one in the eyes of many boxing fans, and it won’t be a shock if Linares comes out the winner.

There won’t be nearly as much interest in a Teofimo vs. Linares fight compared to a Haney clash. 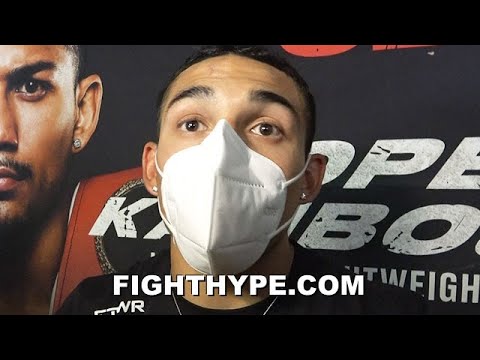