By Scott Gilfoid: In a long-overdue move, the talented former WBC heavyweight champion Deontay ‘Bronze Bomber’ Wilder has hired Malik Scott as his new trainer. Malik is reportedly replacing Wilder’s coach Jay Deas, who has been with him for ages.

Earlier on Friday, Wilder (42-1-1, 41 KOs) posted a video of him and Scott working out on Instagram. In the post, the 6’7″ Deontay let his fans know that Malik is his “new trainer.”

The footwork that Malik was showing Wilder today during their workout appeared to be designed specifically for him to cut off the ring on the 6’9″ ‘Gypsy King’ Tyson Fury for their trilogy match.

What was missing from Malik’s instructions was how Wilder could deal with the incessant rabbit punching from Fury. That’s unquestionably the most important part.

Wilder has got to know how to deal with Fury raining him with illegal rabbit punches over and over again. 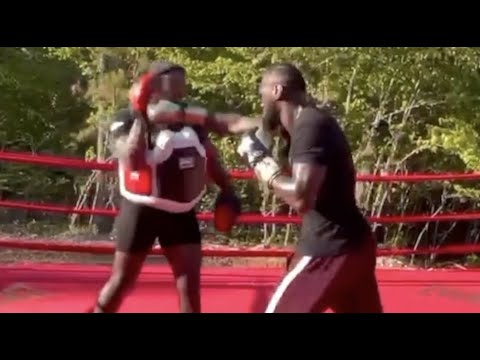 A year ago, Wilder was pretty much done for the night when Fury hit him with a textbook rabbit shot to the back of his head in round three.

Fury’s perfectly placed punch took Wilder’s legs away, and he spent the rest of the fight, staggering around the ring like a drunk sailor on shore-leave.

Wilder appears to be training for the Fury trilogy

With the hard work that Wilder has been putting in with Malik, it’s believed that he’s training for a fight against Tyson Fury. There’s talk that the arbitration might not be going the way Fury (30-0-1, 21 KOs) and Matchroom Boxing promoter Eddie Hearn had hoped it would.

If that’s the case, Fury will need to either fight Wilder next, which would obviously be risky as heck, or give him some green to have him step aside so that he can fight Anthony Joshua.

Hearn practically announced the Joshua – Fury fight earlier this week for August 14th for Saudi Arabia. He even went so far as to say that a new stadium is being built just for the occasion.

But it’s quite possible that Hearn may have spoken too soon because if the arbitration goes against Fury, he may have another choice but to fight Wilder next.

What’s interesting is that Fury’s co-promoter Bob Arum doesn’t seem to mind the idea of him fighting Wilder next. Indeed, Arum sounds like he would fancy that fight happening first because he’s clearly tired of waiting for the Joshua fight.

‘This arbitration [between Fury and Wilder] is not going to lead to stopping the undisputed fight,” said Joshua’s promoter Eddie Hearn to Behind The Gloves.

“If they [Fury’s management] has to do a deal with Deontay Wilder, I have no idea, but it is ongoing. Tyson Fury went to a hearing. They have to go through that process.

“I’m reassured that’s not even an issue, but if that happens, there’s absolutely nothing I can do about it. That’s out of my control.

Wilder has a rematch clause with Fury from their fight last year for the option of a third match. Interestingly, Fury has chosen to walk away from the third fight rather than face Wilder again. If the arbitrator rules against Fury, he may not have any choice but to fight Wilder a third time.


« June 19: Mikaela Mayer vs Farias & Lopez vs Dogboe on Inoue vs Dasmarinas Card

Josh Taylor vs. Jose Ramirez: Who will be crowned undisputed light welter Champion of the World? »