By Sean Jones: A highly agitated Teofimo Lopez went into melt down after being trash-talked by his IBF mandatory George Kambosos Jr on Friday during their kickoff press conference for their Triller pay-per-view event on June 5th.

IBF/WBA/WBC Franchise/WBO lightweight champion Teofimo (16-0, 12 KOs) ripped his shirt off after Kambosos Jr (19-0, 10 KOs) told him that he WON’T make weight for the fight.

If the fight were tomorrow, there’s little chance he would be able to take all that water weight off to squeeze down to 135. Today, Teofimo 160-pounder, and he’s pure muscle with no fat.

This seemed to anger Teofimo because he took his shirt and walked up on Kambosos like he was ready to throw down. Is it because boxing fans have been calling Teofimo a ‘weight bully’ due to him being huge for the 135-lb weight division?

It’s unclear what Teofimo was trying to prove by taking his shirt off and walking forward. If anything, Teofimo looked like a filled-out welterweight than a lightweight when he took his shirt off.  How Teofimo is able to melt down to campaign at 135 is hard to know because he looks huge for the weight.

Teofimo vs. Kambosos will be taking place on June 5th at the Marlins Stadium in Miami, Florida. 58-year-old former heavyweight champion Evander Holyfield will be taking on 47-year-old journeyman Kevin McBride in the undercard.

Kambosos: “Definitely, this will pull me as the greatest ever in Australian boxing. My focus is beating this kid and taking his belts. I’m a little upset because he didn’t bring all the other belts too. I thought he was going to bring them all.”

Teofimo: “This is as closest as your going to get to these.”

Kambosos: “Well, you should have brought them all. I’m going to take them all off you.”

Teofimo: “[Laughter] I love it. I look at it like this. He’s someone in front of me, and I got to knock him out of the way and move him to the side to keep moving to the next guy. Revenge is a dish served cold. My other guys [Top Rank] on the other side, I think they know what I mean,” said Lopez when asked why he’s fighting on Triller.

It’s sad because their team has done everything for him and set everything up for him. They had all their game plans, and they’ve just brushed them to the side.

I’m loyal, I got my team, and I know what I’m about. If they think it’s three [rounds], no problem. Prepare for three, but I’m preparing for every single round.” 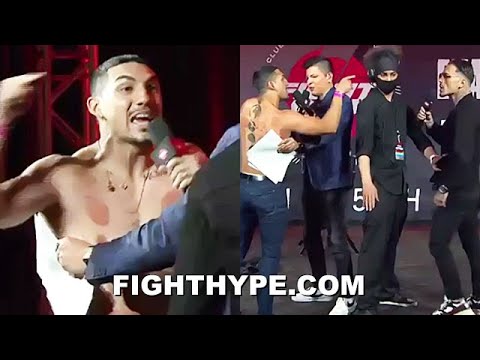 Teofimo: “I’m not in my prime yet, but I have to make a statement. I’ve been in with the big leagues with the guys that have the experience. I don’t overlook nobody that I face.

Me and my father, the dynamic duo, we have 23 years in the game. I’m 23. Me and him, we got everything. We don’t need nobody else. We only bring others because the coach needs help too.

My power is too strong. I’m only getting better. The Lomachenko fight helped me. It helped me a lot, and now I have more things to put in my arsenal that this guy isn’t even going to see.

Teofimo: “I could break you down right now. You’re lucky. I could fight tomorrow.”

Kambosos: “Let’s do it right now.”

Teofimo: “You’re lucky we’re not fighting today because I would put you on a f**** stretcher.”

Kambosos: “You wouldn’t even make weight, boy. Get it off.”

Kambosos: “I’m taking all your belts.”

Teofimo: “You should be thanking me, my guy.”

Kambosos: “What did you do? My team spoke for you, boy. Your promoter doesn’t respect you.”

Teofimo: “I ain’t going to touch you. Just be there on June 5th.”

Kambosos: “You missed your flight yesterday, boy. You be there. “