Anthony Joshua holds the other WBA heavyweight title, referred to as the ‘Super World’ belt, and it’s viewed as the uppermost belt with the organization.

Dubois was forced to quit by taking a knee in the tenth round after his eye injury had become too bad for him to continue fighting.

The fight arguably should have stopped many rounds before that because it was clear that Dubois wasn’t going to stop the 2016 Olympic silver medalist Joyce, who showed a steel chin in taking some massive shots throughout the fight.

In hindsight, it was a wise decision on Dubois’ part to pull himself out of the fight when he did, as he had suffered an injury to his orbital bone. Had he continued fighting, he may have put his fine career in jeopardy.

The 35-year-old ‘Juggernault’ Joyce will now be fighting Oleksandr Usyk for the interim WBO heavyweight title. The winner of that clash will eventually fight the winner of the second Joshua vs. Tyson Fury fights.

Dubois has been given the green light to resume his career when he returns to the ring on June 5th to take on the tall 6’5″ Romanian fighter Dinu for the interim WBA strap.

“He’s not shied away from it, and it’s for the interim title,” said Warren to the Low Down about Dubois’ fight with Dinu.

“The WBA has said that the winner of him and Dinu will be the mandatory for the WBA heavyweight champion.

“It’s straight in, and it puts him in the position that if he wins this fight, he fights or the WBA title,” said Warren.

Trevor Bryan (21-0, 15 KOs) will be a tough out for Dubois if he gets that far to challenge him. Bryan recently stopped Bermane Stiverne in the 11th round last January to capture the WBA ‘regular’ heavyweight title.

Before that, Bryan defeated the talented former cruiserweight BJ Flores by a fourth-round knockout in August 2018. 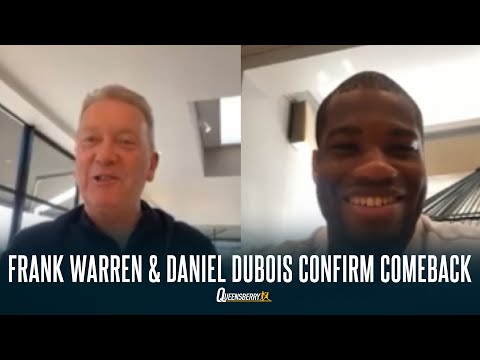