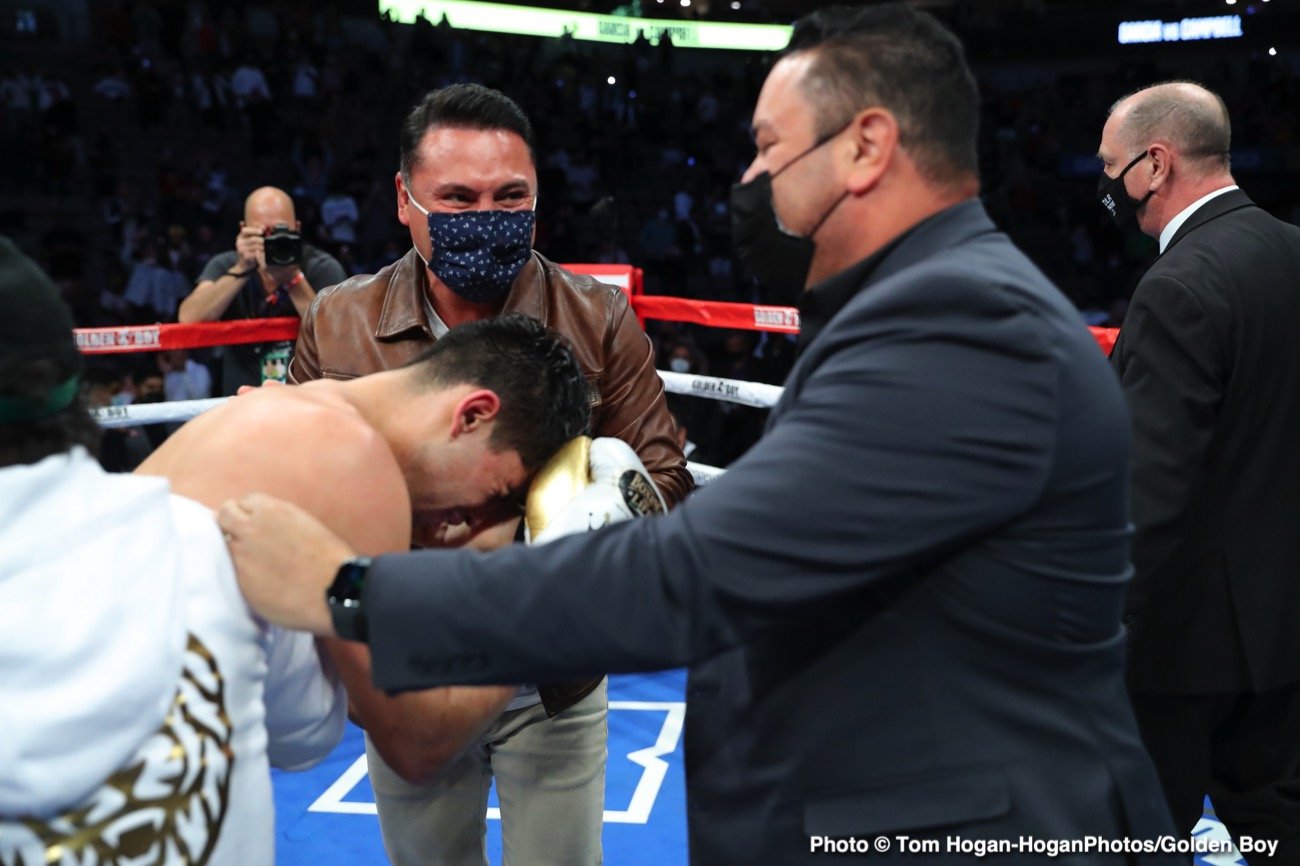 By Sean Jones: It’s now official that WBC interim lightweight champion Ryan Garcia will be defending his belt against #2 WBC Javier Fortuna on July 9th on DAZN at a still-to-be-determined location.

It’s a risky fight for the 22-year-old King Ry to be taking on former WBA super featherweight champion Fortuna (36-2-1, 25 KOs) because he’s got a weird unorthodox style and he’s tough as nails.

“Little by little, Ryan Garcia is silencing all of the skeptics,” said Golden Boy Promotions boss Oscar De La Hoya. It’s a dangerous fight for Ryan, but I expect him to show newer elements in his arsenal before ending matters by knockout.”

Ryan still hasn’t come close to silencing his “skeptics,” at least the ones that had their eyes open when watching his last fight against Luke Campbell.

If anything, there are even more doubters than before after the way Ryan labored to a victory against the 2012 Olympic gold medalist Campbell.

Ryan putting his career on the line

Fortuna, 31, is quite capable of beating Ryan if he can put hands on him the way that Campbell did last January.

Ryan looked flawed against Luke and didn’t appear to be in the same universe as the talented lightweights like Teofimo Lopez, Devin Haney, Fortuna, Gervonta Davis, Vasily Lomachenko, Masayoshi Nakatani, and Jorge Linares.

In the end, Ryan’s left hook power is what saved him from suffering his first career defeat against Campbell.

Ryan was dropped hard by the light-hitting Campbell in the second round last January, and he appeared to lose consciousness while on the way down from that shot.

If Fortuna is able to land his punches the way that Campbell did, Ryan’s unbeaten record will be a thing of the past.

Additionally, his promoters at Golden Boy Promotions will be kicking themselves for agreeing to make the Garcia vs. Fortuna fight.

The winner of the fight will be the mandatory challenger to fight WBC 135-lb champion Devin ‘The Dream’ Haney. If Ryan chooses not to use his mandatory status again, the WBC might need to consider removing him from their top 15 rankings.

The perception that boxing fans have of Ryan is he ducked Haney for fear of losing to him, and instead, he’s been wasting time on social media, bragging himself and doing nothing.

It’s a waste of the WBC’s time if they continue to order title eliminators involving Ryan, and then he doesn’t take advantage of them to challenge Haney for his world title.

Will Ryan fight Haney if he wins?

Ryan has ALREADY earned the mandatory spot to face Haney last January after he defeated Luke Campbell by a seventh-round knockout in an official WBC lightweight title eliminator.

Unfortunately, Ryan dismissed the fight with Haney, saying it was a “boring” one, and instead, he tried to line up a match against Manny Pacquiao.

That fight didn’t happen and neither did Ryan’s dream match against WBA ‘regular’ lightweight champion Gervonta ‘Tank’ Davis, so here we are again.

Ryan will be fighting in a SECOND title lightweight eliminator with the World Boxing Council, and it’s anyone’s guess whether he’ll choose to challenge Haney (25-0, 15 KOs) for his title if he defeats Fortuna.

Garcia vs. Fortuna will be taking place on a Friday, which is unusual for Ryan (21-0, 19 KOs) because he’s been fighting on Saturdays. There’s likely an event that Ryan’s promoters at Golden Boy will be avoiding by not fighting on Saturday, July 10th.

“Hopefully on fight night, there will be no excuses for his loss,” said Fortuna. “I expect this fight to be a war while it lasts, but I have too much of everything for Ryan Garcia.

“His last fight [against Campebll] showed how easy he is to hit. And his power won’t mean anything to me. But mine will put him to sleep,” said Fortuna.

There’s a VERY real possibility that Fortuna will knock Ryan out on July 9th, and it’ll be a bad day for Golden Boy. They’ll realize that they shouldn’t have taken this fight with Fortuna, who is an old-school tough guy.