Amanda Serrano: “I would love nothing more than to share the ring with Katie Taylor” 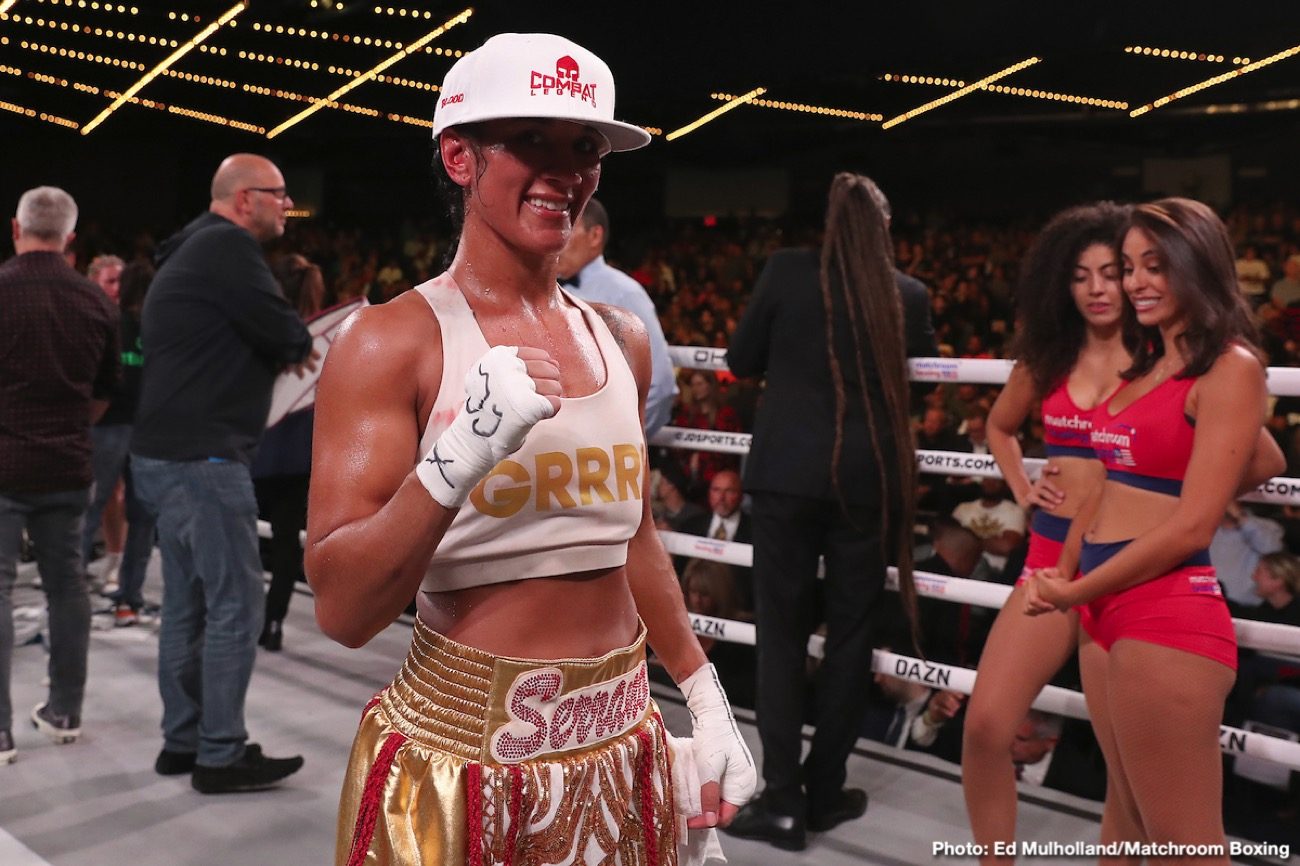 By Ian Aldous: A fight falling foul during a frightful 2020 was not a unique issue for any single boxer. But, for seven-division world champion Amanda Serrano, it was bitterly deflating to miss out on one of the very biggest fights that could possibly be made in the women’s game.

The proposed bout for Katie Taylor’s IBF, WBA, WBC & WBO 135-pound world titles, was scheduled three times in the early part of the pandemic’s grip that crippled boxing. It eventually fell atop the scrapheap of failed fights with some bitterness resonating on both sides. But, it seems all is not lost.

More fights fell through in an annus horribilis, until a spot on Ring City USA’s December 17th show was supposedly sealed. The plan was for Serrano to share a bill that included Jelena Mrdjenovich, with both featherweight champions planning to eventually clash and unify their gold in 2021. 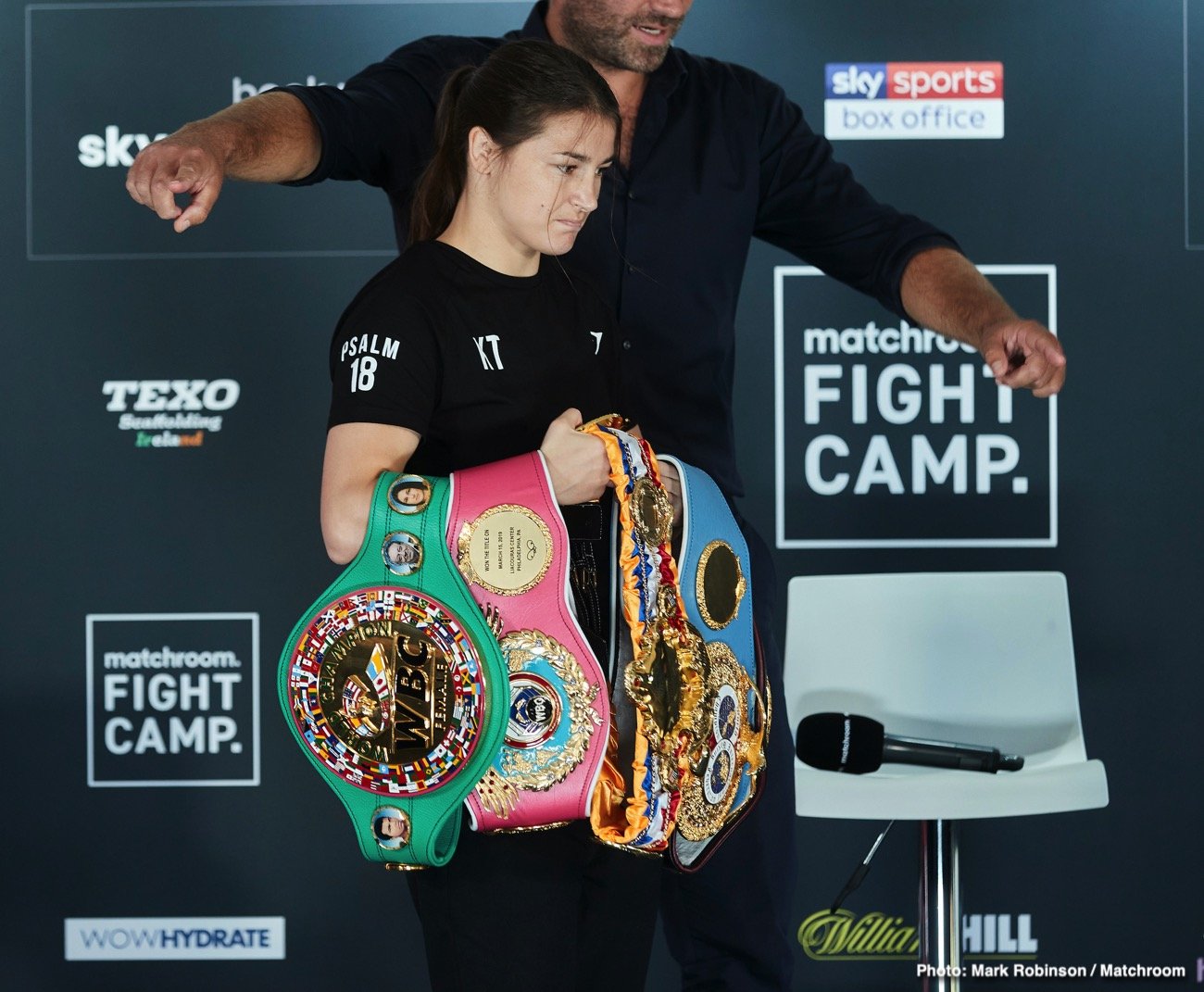 Alas, Serrano’s scheduled opponent failed a Covid test and the 39-1-1 southpaw was left in limbo. Even worse was to follow as the hastily arranged replacement was unable to make it out of Argentina due to travel restrictions. Promoter Lou DiBella scrambled to secure Dahiana Santana, who Serrano had already stopped in 2017. The fight was finalised and moved to one day earlier in the Dominican Republic. In just under 100 seconds, the Puerto Rican earned her thirty-ninth professional win in emphatic fashion.

To add salt to the already weeping wounds, the planned unification clash with WBA & WBC titleholder Mrdjenovich hit the rocks for many reasons including her trainer falling very ill. The WBC declared the Canadian as emeritus champion and awarded Serrano, who possessed the interim belt, as full champion. Much like her desire to fight Taylor, Serrano still harbours hopes of battling Mrdjenovich.

“I would have loved that. That fight was supposed to happen now with us unifying,” the WBC & WBO unified world champion told me. “She does have the WBA (title) and I want to be undisputed champion, so she has another piece of that puzzle. She has another fight coming up against another Mexican fighter, so I wish nothing but the best for her in that fight because I do want to fight her. But, whoever wins in that, I’ll definitely challenge because they’re in my way of becoming undisputed champion.”

Thankfully, a fight of substance tantalisingly lies just over a week away, as Serrano will put her unified titles on the line against three-weight world champion and consensus No.1 super-bantamweight, Daniela Bermudez. The ten-round title bout will headline Ring City USA’s card, live on NBC Sports Network, in Serrano’s homeland of Puerto Rico. 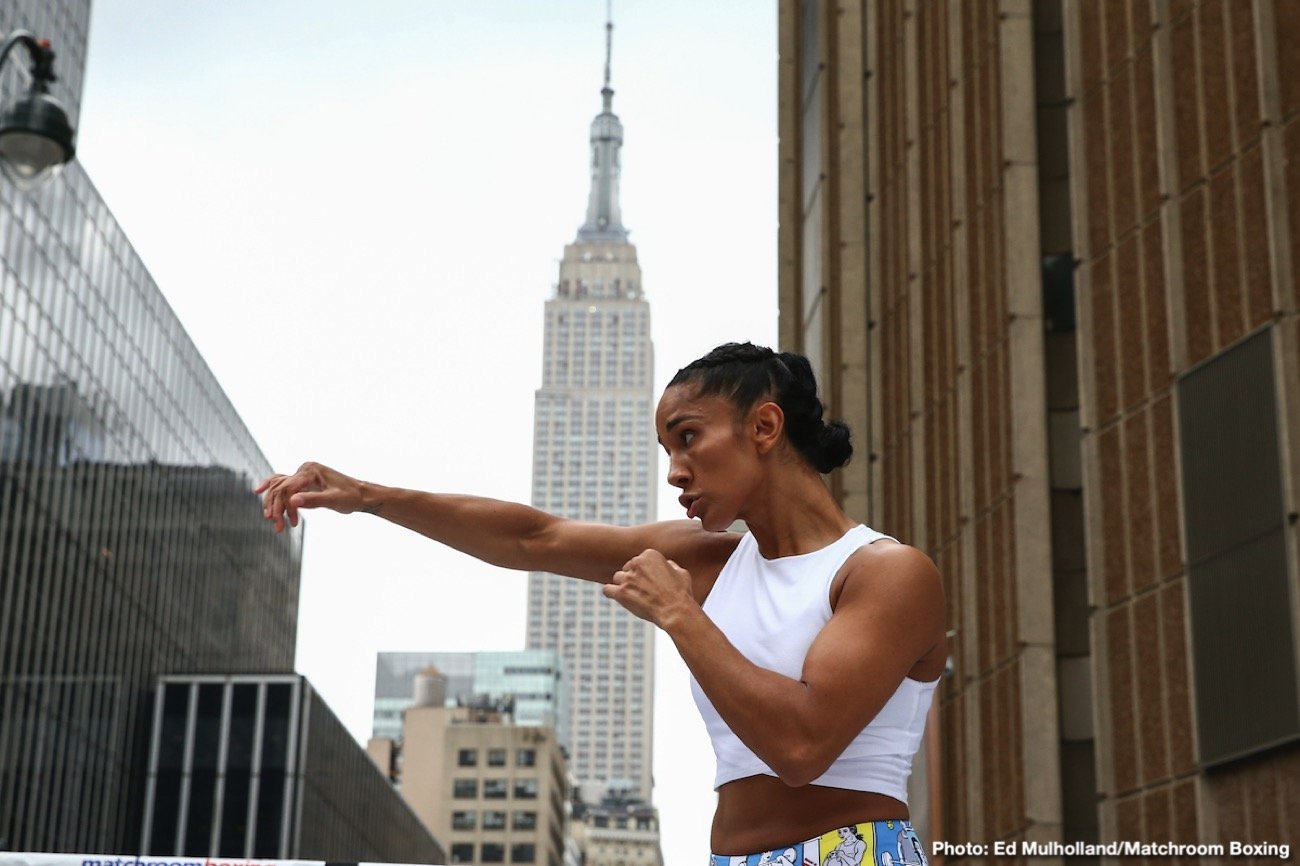 “I’m super-excited for this fight,” she said passionately. “Somebody on her team put something on Twitter saying that she would like to fight me, so now we have the opportunity to fight on NBC Sports, in Puerto Rico, my island. Jordan (Maldonado, trainer and manager) decided to call (Lou) DiBella right away. She’s a tough fighter and a Latina, like me. She’s young and she’s hungry. I know she throws lots of punches and doesn’t back up – neither do I. We couldn’t ask for a better fight to put on in Puerto Rico on TV. I’m super-excited and pumped for this fight.”

Since debuting in 2009, Serrano has staggeringly claimed world crowns from super-flyweight all the way up to super-lightweight. Greatness has been attained; legend status secured; the Hall-of-Fame awaits. Yet the hunger and desire in the champion, who now resides in New York, still burns ferociously.

A decade after winning her first world title, it’s a starkly different landscape that female boxers now traverse. Improvement is still needed, especially in the U.S., but thanks to pioneers like Serrano, the purses and opportunities are improving. She won’t forget those difficult early days.

“It was definitely tough,” Serrano admitted. “I definitely done the fights where I fought top girls for practically nothing, (like) Fatuma Zarika for $1500. She became champion and I was a multiple world champion at that time. I fought her twice, back-to-back, for $1500.”

“When my sister (Cindy Serrano) started (in 2003) it was horrible, but it’s getting better,” she added. “As long as I do it for the girls coming up behind me, and I continue to open doors and barriers for them, I’m super-excited for the newcomers.”

“I’m so done with doing it for the love of the sport, now it’s time for me to be able to make some money off it and have something for the future once I’m retired from this sport, to say, ‘this is what boxing has given me’. Even though boxing has given me a lot so far, I want to be able to live in the house I dream of and say that thanks to boxing I achieved this goal.”

After twelve years as a pro, you’d think it might be that the ‘Real Deal’ would be contemplating hanging up the gloves? Not a chance. She hopes to claim four belts at featherweight and then challenge Katie Taylor at lightweight. Serrano even refused to rule out another foray into MMA to improve on her 1-0-1 record at some point for a ‘couple of fights’.

As the debate rages on concerning whether females should compete in two or three-minute rounds, the purported main reasoning to add an extra minute to each stanza is that it’s difficult to score a stoppage in rounds consisting of just 120 seconds. Tell that to Serrano, who possesses a blistering 70% knockout ratio.

“Personally, I had twenty-nine knockouts out of thirty-nine fights in two-minute (rounds) – they do me good (laughs). I know what I’m working with and what I have to do in those two-minutes. I think with three-minutes, I’d probably slow down a little bit, but I don’t want that! I’m happy with my fast-paced fighting. We’re getting paid for two-minutes (laughs), so maybe if they paid us extra for the extra minute then I’ll be all for it, but right now, two-minutes has done me good.”

“Expect the same old Amanda,” Serrano said as I asked what we can expect to see on March 25th.

That’s also the seven-division queen who still has many goals in the sport – an ominous prospect, not just for Bermudez, but all featherweight titleholders, and hopefully, Katie Taylor.