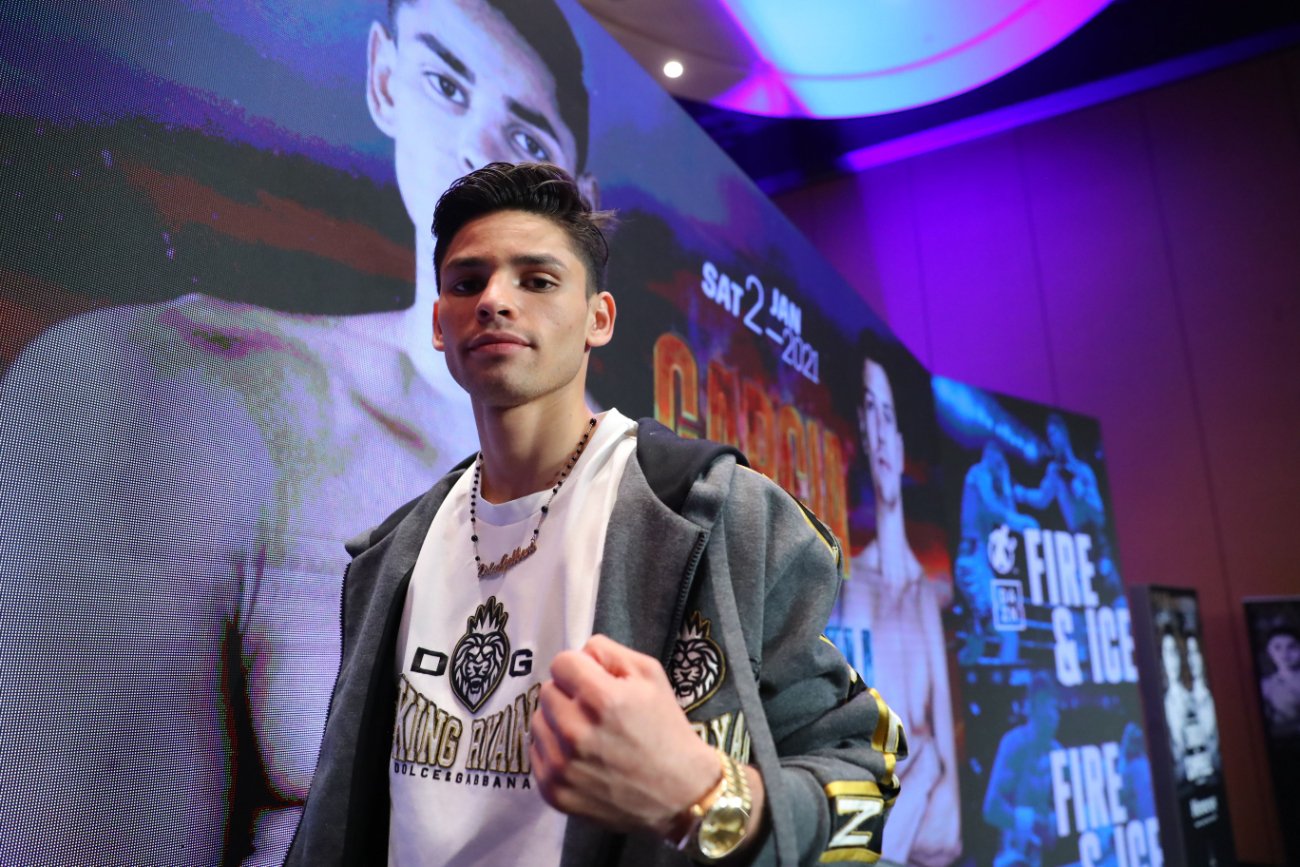 Garcia (21-0, 18 KOs) feels that it’s pointless to win a title. He just wants to fight the popular guys, and that’s why he wants suddenly reluctant Teofimo to face Haney need so they can weed out one of them.

Haney (25-0, 15 KOs) has zero popularity at all right now, but that could change if he whips Teofimo and rips away all the belts that he values so highly.

Ryan would then face whoever emerges as the winner, and the boxing public would get a fight. The trinket titles would far less important than the fighters that battle it out.

Getting Teofimo to agree to fight Haney is the hard part. You can’t drag Teofimo kicking and screaming into a fight with Haney if he refuses to fight him.

Ever since Teofimo pulled off a big pet against an injured Vasily Lomachenko on October 17th. It seems like Teoimo has completely lost his nerve after that win.

Teofimo not only doesn’t want o give Lomachenko a rematch, but he’s also ruled out fighting the other top fighters at 135 as well. He’s saying they need to fight each other to earn a fight with him. While they do that, Teofimo will take on George Kambosos Jr.

“Belts don’t mean anything nowadays. I could take somebody off the street and, if I play it politically correct, I’ll make them a champion,” said King Ryan to the AK & Bark Show @SiriusXMBoxing. 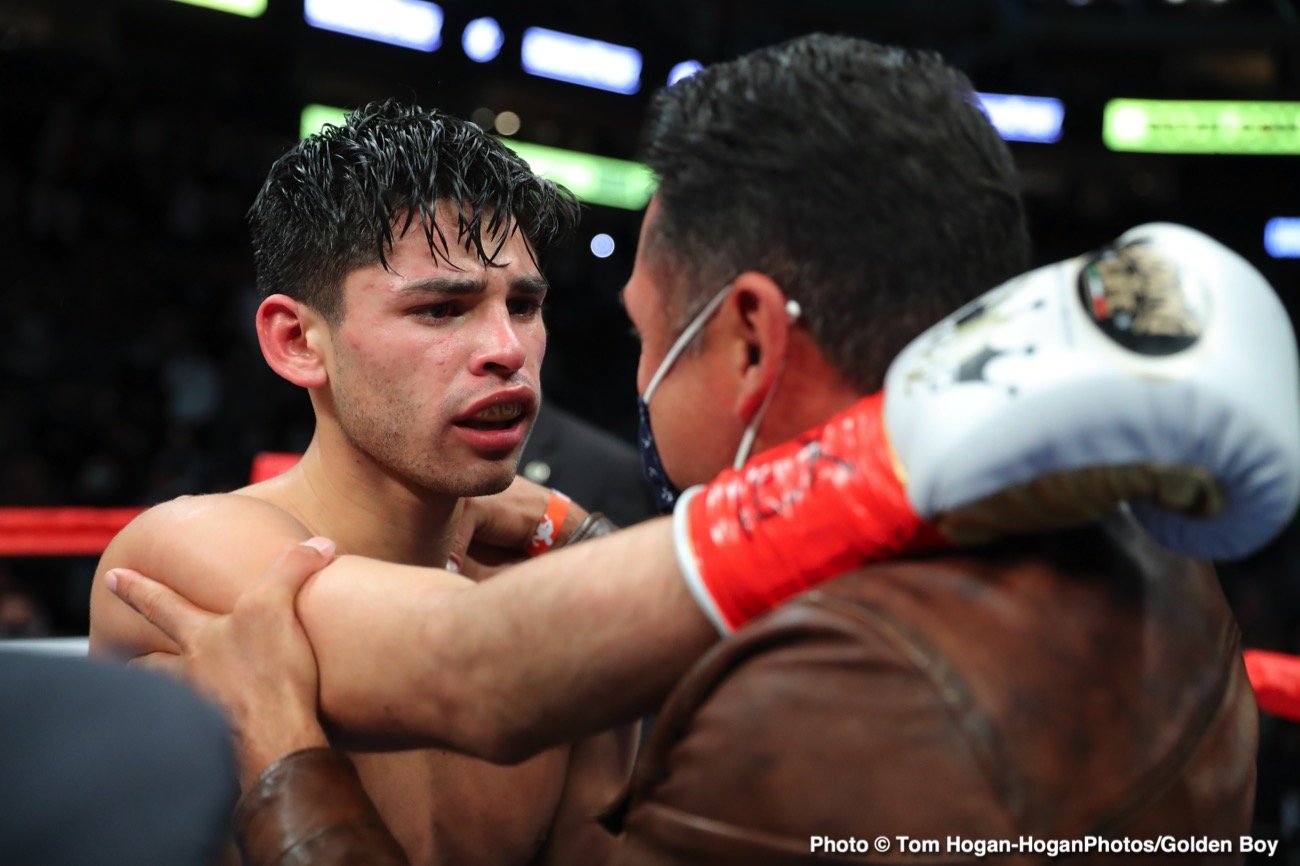 “People know who are the best fighters. Devin Haney needs to fight Teofimo Lopez and I’ll fight the winner.”

“I’m going to move on to inspire people differently and to play my part in this battle against hate and confusion in America,” said Ryan Garcia on his plans on what he’ll be doing when he retires in four years at the age of 26.

World titles are only important for the fighters that have no fans, who most people wouldn’t know or care about.

For fighters that have few fans due to poor visibility, charisma, or a boring fighting style, they need to hold titles so they can be noticed by the networks and boxing fans.

The reason for that is, once you hold a world title, you’re a prisoner to the sanctioning bodies, who require you to fight their godawful mandatory challengers with no fan base or talent.

One example is Canelo Alvarez being required to defend his newly won WBC super middleweight title against mandatory Avni Yildirim.

Canelo will get zero attention from that fight, and he’ll make less money than he would if he were free to fight a popular fighter like Gennadiy Golovkin.

If you’re Canelo, you’re way better off depositing the WBC title in the nearest trash bin and letting someone take the nothing fight against Yildirim for the strap. But perhaps Canelo wants the WBC title because it gives him an excuse to take easy fights.

If Canelo didn’t have that belt, he would be expected to take on opponents that the boxing public actually wants to see him fight.

“That boy’s heart was racing, you could see it,” said Teofimo Lopez to ESNEWS about Ryan Garcia when he was trash-talking Tank Davis on Mike Tyson’s Box In Podcast on Thursday.

“I got to see it to believe it,” said Teofimo Lopez Sr on a fight between Ryan Garcia and Tank Davis. “Yeah, let’s see.”

With Ryan Garcia’s near-obsession with Tank Davis, it’s unrealistic to see him NOT taking the fight with him. That’s all Ryan talks about night and day is Tank Davis, and there’s no chance that he won’t fight him.

Ryan’s short four-year timeline before retiring at age 26 makes it essential that he take this fight with Tank, as it’ll make him a bundle of dough that will help feather his retirement nest.

Having the golden parachute money from the Tank fight will make Ryan’s retirement years easy. He’s also got the Youtube thing where he can make money in the same way Logan and Jake Paul make huge cash every month from their channels.

Ryan Garcia currently has over 8 million followers on social media. Those numbers could double if he’s able to pull off an upset over Tank Davis and beat the Teofimo vs. Haney winner. The money that Ryan is going to make from the Tank fight will be astronomical.

If the fight brings in over 4 million pay-per-view buys, Ryan will make Mayweather-type money. A rematch will be an option if the fight is competitive.

It makes all the sense in the world for Ryan to be pushing for the Tank Davis right now rather than for him to work his way into that fight. We saw how close Ryan came to losing his last fight against a very average Luke Campbell last Saturday.

That fight showed how important it is for Ryan to go after the money fight now against Tank because if he loses to someone before that, his dreams of making all that cash will be gone.

Lopez gives his rationale for NOT making big fights

“We just got to wait and see. We [Teofimo and Lomachenko] hit around four million views or 4.2 million with the Loma fight,” said Teofimo. “That’s big numbers, that’s good numbers.

“I’m just trying to see what else we can get. Everybody is calling me out like I’m about to give out free belts or something.

“Everybody got to be careful. Don’t use my name like that. Now it’s come to the point where who is going to be next, and what do they bring to the table because I do a lot of the promoting, and Devin Haney talks a lot.

“So that helps a lot as well. We just got to wait and see. We have great fights that we’re planning to make in 2021 for all the fight fans.

“So you have to expand those fights. There’s a lot of things. I’m all about the fans, and I’m all about what they want and everything, you know? “The whole thing now is, what does that do for me, though?” said Lopez.

What Teofimo is saying is very troubling, and confusing as well. It sounds wrong-headed what Teofimo says about why he can’t give boxing fans the fights they want to see.

There will always be big fights to be made for the talented fighters, but obviously not for the fighters that don’t rate. If Teofimo does fight Lomachenko again, he could lose, and that destroys his dreams of all these big fights.

So by Teofimo making an excuse why he shouldn’t take these difficult fights, he’s able to keep himself from exposed and brought back down to earth.

“It’s a different ball game,” said Teofimo when asked about his sparing with Devin Haney in the past. “He hasn’t fought high-caliber guys as I did. I’ve learned from those guys.”

“He learned a lot from Lomachenko,” said Teofimo Sr about his son.

The way Teofimo rattled off the comment about how Haney hasn’t fought the same kind of opposition that he has, it sounds like he didn’t do well sparring with him. Teofimo’s face had a look on it that could easily read.

It looks like Haney got the better of Teofimo during sparring, and that’s why Teofimo was so quick to brag about how he’s faced the better competition as a professional thus far.

Teofimo rates his power above Tank’s

“I don’t watch any of these guy’s fights,” said Teofimo to Fighhype about the other top lightweights. “No, I didn’t watch Haney’s fight.

“I already know what I expect from these guys. So what’s the point in watching it? I don’t tune in, and I don’t need to. They got a long way to keep going to get to where I’m at.

“I mean, they need to fight me to get to that point. Yeah, of course. I’m still growing,” said Teofimo when asked if he hits harder than Tank Davis. “My power, I still have more to grow. I’m the bigger guy, and I hit a lot harder.

The whole thing now is whether we make that fight happen. You heard Floyd [Mayweather]. He said he wants another fight for Tank before he fights me.

“So obviously, that’s off the list. Then we got Devin, we got Ryan. That’s the thing.

“Those are the type of fights that I like to generate off of is what kind of fights that are going to make it spectacular or all the fans are like, ‘Yo, I want to see this fight,'” said Teofimo.

For a single shot, Teofimo might have a little more power than Tank Davis, but he’s slower. he doesn’t throw combinations the way that Tank does, and he’s clearly less willing to fight the best.

Lopez: Who is going to benefit me?

“There’s nobody,” said Teofimo when asked if he has an opponent that would be a ‘personal bad blood’ fight for him. 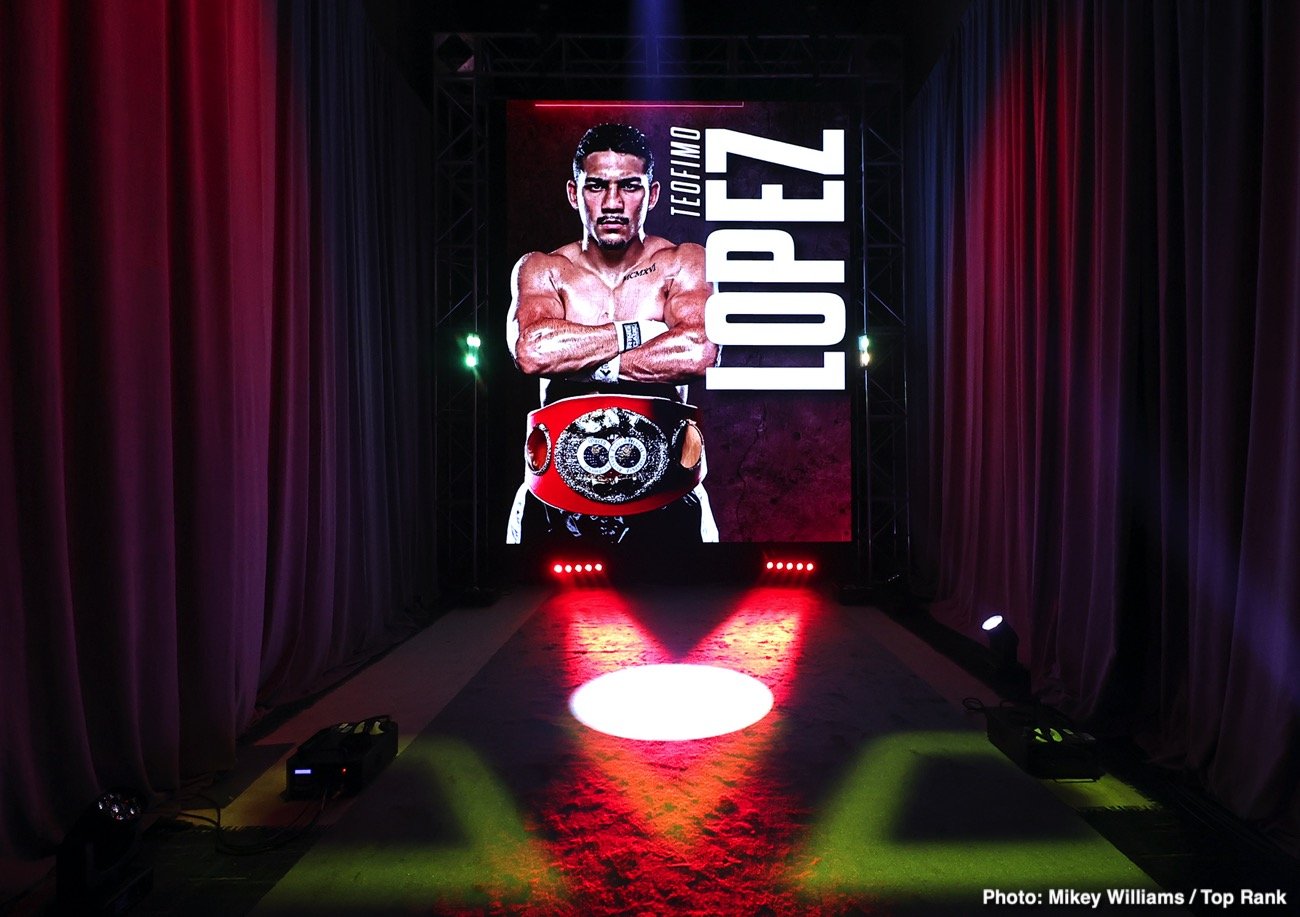 “I know what I can do when it comes to my abilities and everything. And I just can’t wait. I knew these guys are hungry. They want all my belts.

“The same reason why Loma came up short. The thing is, I’m hungrier. You got to have that grit. I bite down when I need to, even when it comes to the last round or whatever it is.

“If I get cut or anything, I’m just a fighter. I’m going to go out there. It’s about how bad you want it, and I don’t think any of these cats what it as bad as I do.

“That’s what makes me different from everyone else. Don’t get me wrong, they’re great talents. We can definitely make big fights happen, and we are. Do you know what I mean?

“The whole thing now is who is going to be beneficial for me right now?” said Teofimo in sounding like he’s not interested in taking dangerous fights.

There are plenty of fighters that can benefit Teofimo if he’s serious about wanting to face talented opposition. Here’s a short list: