By Matt Lieberman: Eddie Hearn reports that they still don’t have a signed deal for Canelo Alvarez to face Billy Joe Saunders in May, but that’s the plan he’s working on right now. Hearn says there’s a possibility that Saunders could fly out the week of the fight to announce the match with Canelo.

As previously reported, the possible dates for the fight are May 1st and May 8th.

Canelo (54-1-2, 36 KOs) still must win his fight next month against Avni Yildirim on February 27th and get through it unscathed for him to move ahead for a unification bout against WBO super-middleweight champion Saunders (30-0, 14 KOs).

Hearn says that the Allegiant Stadium in Las Vegas, Nevada is just one of a number of possible locations for the Canelo vs. Saunders fight.

It could take place in Florida, Texas at the Cowboy’s Stadium, the T-Mobile in Las Vegas, and also possibly internationally.

The bar has been set really low for Saunders to do a better job against Canelo than his fellow countryman Callum Smith, who looked bad in losing to him.

Canelo toyed with Callum in the process of beating him by a 12 round unanimous decision on December 19th.  Alvarez spent much of the time targeting Callum’s left bicep to take away his left hook.

“No, it’s not signed. We’re working on a few things but it’s true that is the plan,” said Hearn to iFL TV about Canelo Alvarez facing Billy Joe Saunders on May 1st or May 8th after he meets with Avni Yildirim on February 27th.

“Obviously, the plan is for him to fight Billy Joe Saunders next. That’s the reason he’s [Canelo] gone with us.

“We have a one-fight deal with DAZN, which is Avni Yildirim, and we’re working on tying up that second fight of that deal with Matchroom. So hopefully that’ll be Billy Joe Saunders.

“Canelo and Eddy Reynoso are completely focused on Avni Yildirim on February 27th, and we’ll be working behind the scenes to tie everything up with Billy Joe Saunders.

“Hopefully, we’ll be in the position for Billy Joe to go out and announce close to that fight.

“I don’t see any reason to announce that fight before the Yildirim fight because until he [Canelo] wins and comes out unscathed, that fight isn’t happening with Billy Joe.

We are in the position where we’re very close to finalizing that fight, but as of yet, not completely done. We’re very hopeful that fight [Canelo vs. Saunders] will happen in May.

“A deal hasn’t been papered yet. There are things to do, but I’m very hopeful that Billy Joe Saunders will face Canelo in May.

“But the focus is really on Yildirim and coming through that fight. When that’s done, we’ll be in the position to announce Canelo’s next fight,” said Hearn.

It doesn’t make sense to announce anything right now because Canelo still needs to beat Avni Yildirim (21-2, 12 Kos), and win without getting hurt. I

f Hearn announces the Canelo vs. Saunders fight now, there will be a lot of angry boxing fans if something goes wrong against Yildirim.

“Not a great deal of difference,” said Hearn when asked what’s the difference in money for Billy Joe from last May compared to this May for his fight against Canelo. 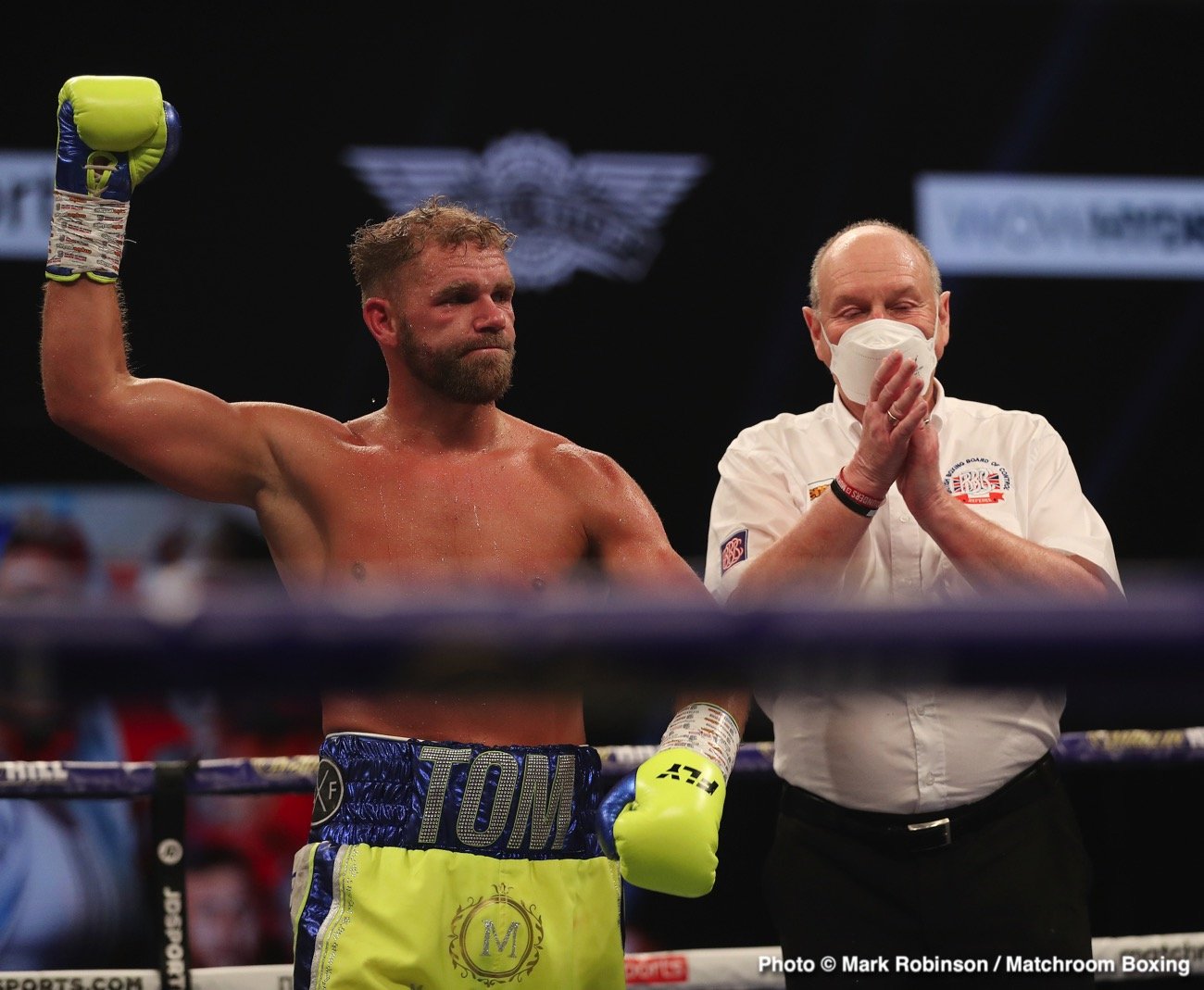 “It is less for everybody, to be honest with you. We’ll see crowd-wise as well. We were very lucky in America. We had 12,000 for the Callum Smith [vs. Canelo] fight.

“We’re going to have 15,000 for the Miami Dolphin, the Hard Rock Stadium in Miami for the Yildirim fight, and then hopefully we can return to a full stadium in Las Vegas, Dallas, or the T-Mobile in America for that fight.

“The Allegiant Stadium in Las Vegas, that’s a possibility, but we have not had any conversations with them just yet. We are looking to take that to Dallas to the Cowboys Stadium in Dallas, and the Allegiant is also an option and the T-Mobile.

“We wouldn’t rule out taking that internationally as well. It’s still to be agreed,” said Hearn when asked if Canelo will fight Saunders on May 1st or May 8th.

It sounds like Team Canelo will gamble on staging the Saunders fight in a stadium, either in Arlington, Texas or Las Vegas. As long as Canelo isn’t expecting a crowd of more than 15,000, it should be fine.

But if he and his manager Eddy Reynoso believe they’ll pull in 60,000 for a fight against Saunders, they could be in for a disappointment. They need to see this fight from the casual boxing fan’s perspective.

They’ve never heard of Saunders before in the U.S, and they won’t be as excited about this fight as if Canelo were to face a household name.

“He’s done a deal with us, so obviously we’ll be promoting his second fight. So the plan is Billy Joe Saunders,” said Hearn about Canelo wanting to unify. 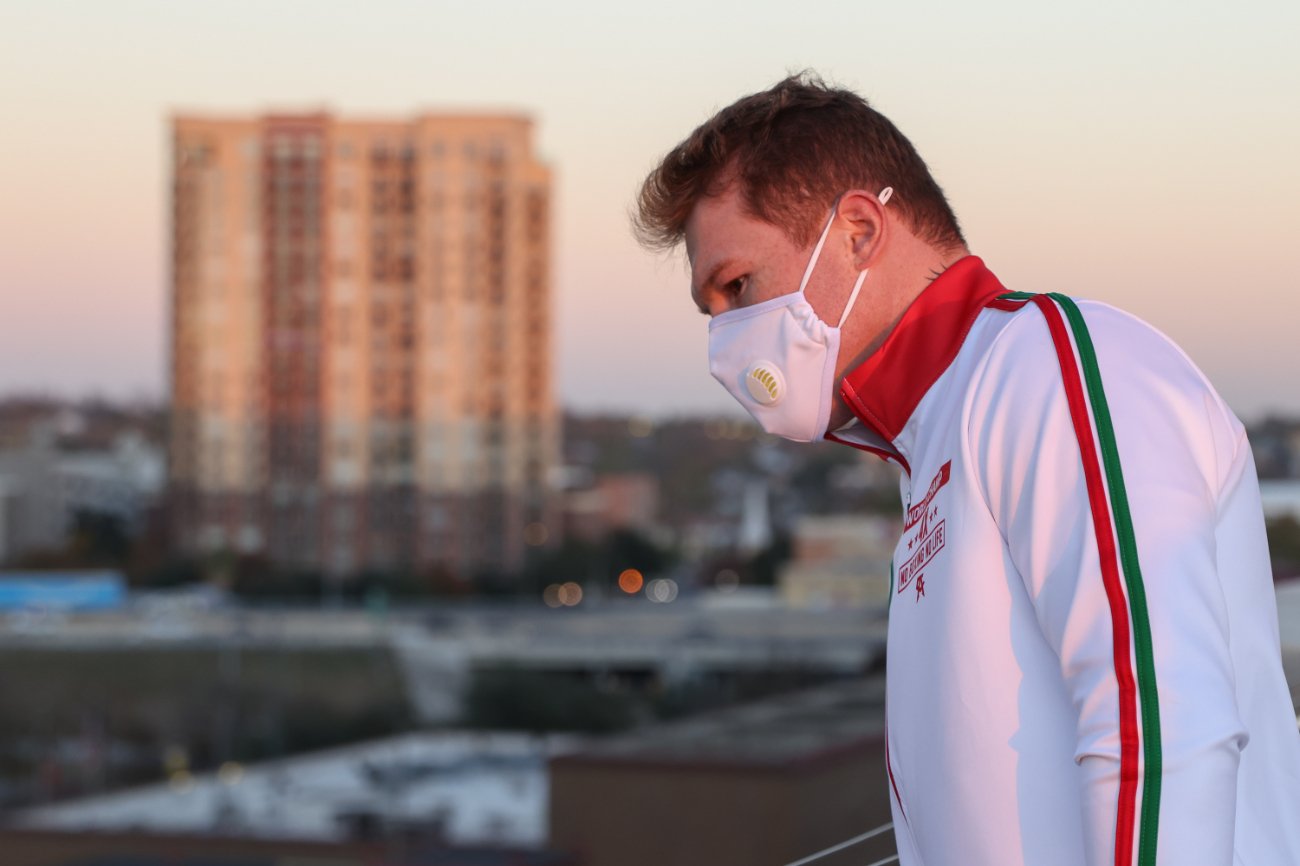 “We have a very clear instruction working with Canelo Alvarez, which is to become undisputed champion [at 168] as quickly as possible.

“So after Yildirim, after that mandatory is out of the way, there are only two fights that need to be taken care of. One is Billy Joe Saunders and one is Caleb Plant.

“Obviously, Billy Joe Saunders is going to be looking to completely ruin those plans in May. But if Canelo wins that fight, he will want to fight Caleb Plant after that to become undisputed.

“I know Canelo won’t want to be announcing anything before that fight [with Yildirim].

What makes it even more important for Canelo to try and become the undisputed champion at 168 as quickly as possible is the fact that they’ll have to deal with mandatory defenses if he drags this out.

If Canelo gets stuck having to defend against former WBC champion David Benavidez or Edgar Berlanga, he could possibly lose.

“I have to produce the goods. I’ve done that with Yildirim, and I’m going to try to do that with Billy Joe Saunders,” Hearn said. “Again, I’m in a position where it’s enabling me to give my fighters opportunities to land the biggest fight in boxing.

“I did it for Callum Smith. Now hopefully I can do it for Billy Joe Saunders as well, and I can deliver that opportunity for Billy because that’s when Billy Joe signed with us, that’s what I said I would do.

“I did it last May, but unfortunately, the pandemic hit. I kept him busy against Martin Murray. People are, ‘Oh, what have you do for Billy Joe Saunders?’

“The answer is hopefully we would have designed for the Canelo fight tiwce. Last time, it was no one’s fault that it didn’t happen, but hopefully, I can provide that opportunity for greatness for Billy in May.

“He said for a long time that he can beat Canelo Alvarez, and he may get his chance in May,” said Hearn.