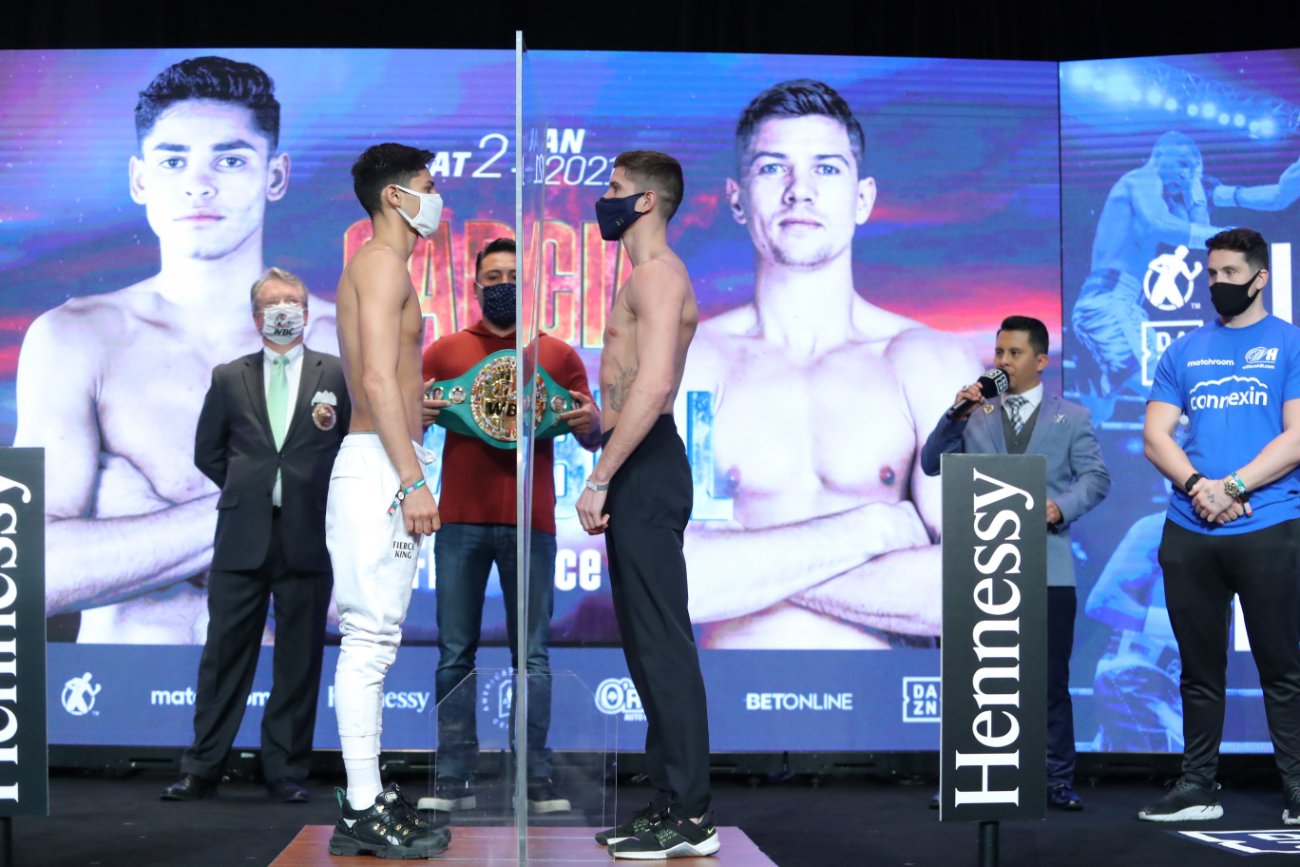 By Sean Jones: Canelo Alvarez will be walking Ryan Garcia into the ring on Saturday night for his 12-round fight against Luke Campbell. The fight will take place on Saturday and will be streamed live worldwide exclusively on DAZN. The main card will begin at 3:00 p.m. EST with Garcia and Campbell expected to make their ring walks at 6:00 p.m. EST.

Alvarez will be able to snatch some of Ryan’s fame by escorting him to the ring tonight.

It’ll be interesting to see if Canelo returns the favor when he defends his newly won WBC super middleweight title against Avni Yildirim on February 27th in Guadalajara, Mexico. If Canelo doesn’t let Ryan escort him into the ring, it’ll not be enjoyable.

Canelo and Ryan (20-0, 17 KOs) are trained by Eddy Reynoso and have recently become good friends. Ryan says Canelo told him that he’s the most “gifted” fighter he’s ever seen before.

Of all the fighters Canelo has seen during his life, it’s hard to believe he views Ryan as the most “gifted.”

That’s a huge compliment that Canelo gave Ryan, but it won’t mean anything if he loses to the two-time world title challenger Campbell (2-3, 16 KOs) in their headliner spot on DAZN tonight.

“I know I’ve improved a lot, so I was probably ready for Luke two fights ago,” Ryan Garcia said to SI Boxing with Chris Mannix. 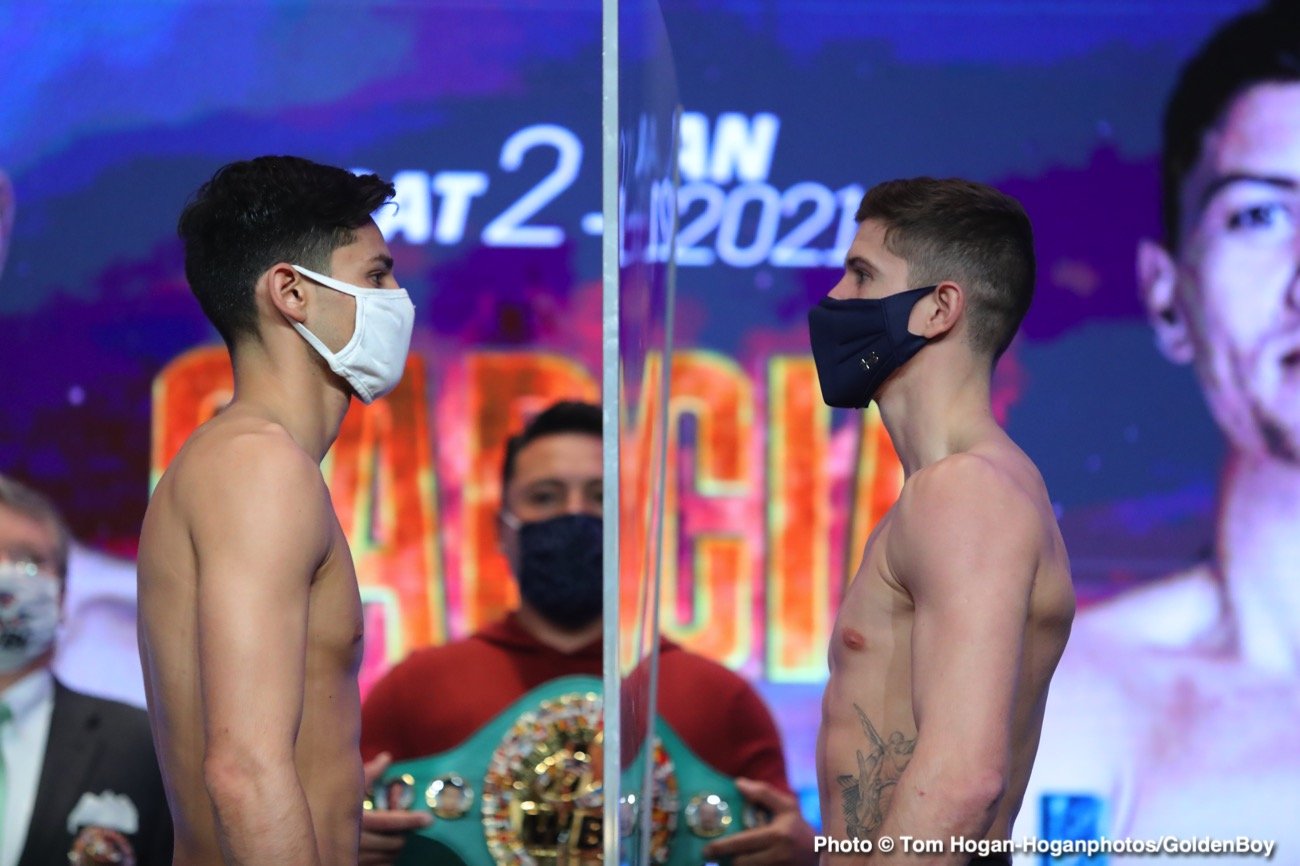 “It’s scary that I get better throughout the rounds,” said Ryan about him getting better as a fight progresses. I’m gaining more control and catching these guys.

“I’ve been throwing royal flushes two times in a row. Can I do it three times?” said Ryan about him looking to score his third straight first-round knockout.

“We’ll see, but I know myself that I can. To everyone else, they haven’t seen it, so I can’t answer that for you. Luke has got to try and make that happen, and that’s what he’s here for,” Ryan said about Campbell looking to stop his first-round knockout streak.

“As Manny Pacquiao said, ‘If you work hard, everything else is easy.’ Thank God I worked hard. I’m confident, and I’ve got a little bit of cockiness, But I will never lie to myself.

It isn’t very likely for Ryan to get a third straight knockout against Luke. This is too good to be stopped fast.

Canelo to walk Ryan Garcia to the ring

“He just said I’m ready,” said Ryan Garcia about what Canelo Alvarez told him about his fight with Luke. “I think he’s more excited than me. 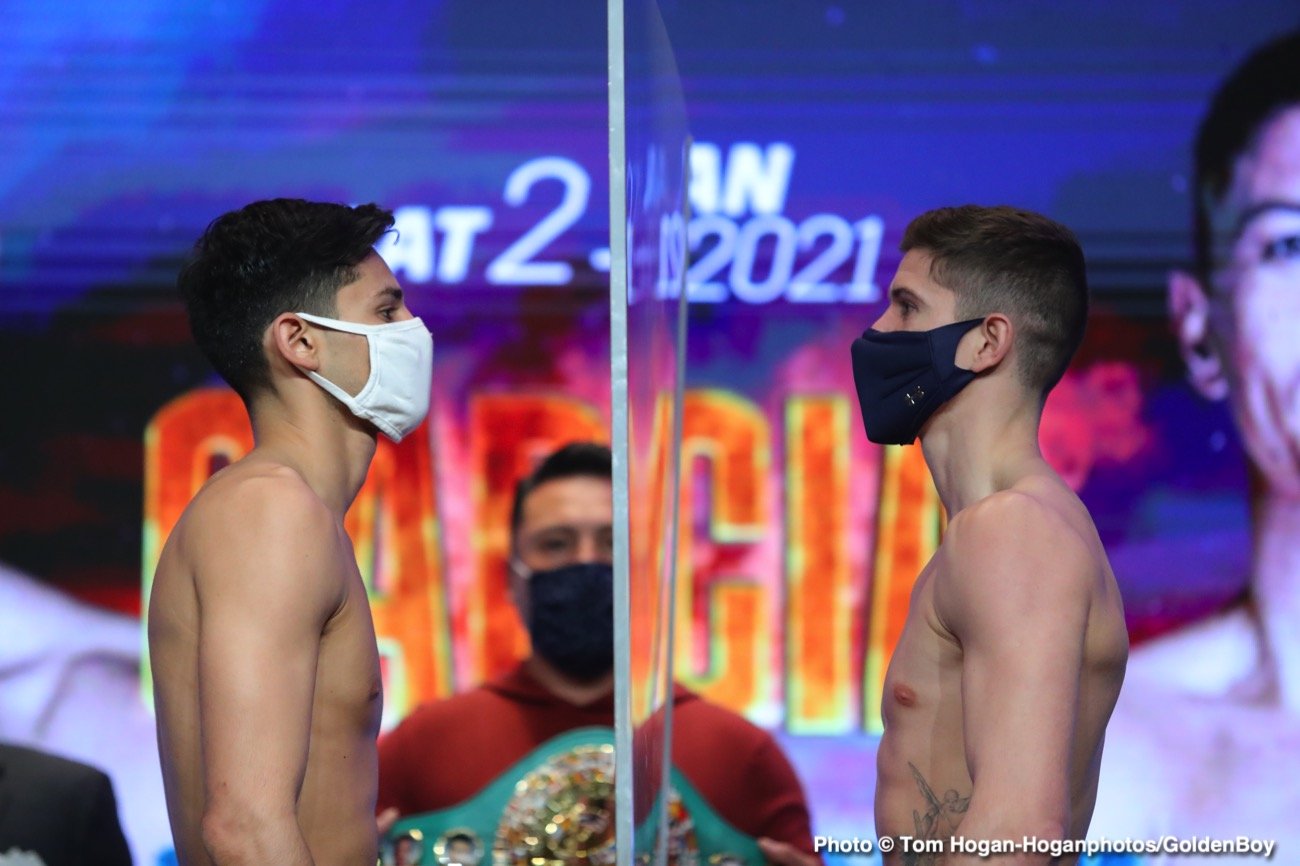 “He’s going crazy. I think he just wants to see me succeed, and I’m just blessed to have him,” King Ryan said of Canelo.

He’s going to walk with me by my side come fight night. We’re going to do the thing. He did his thing [against Callum Smith], and now it’s my time to do my thing.

“It was supposed to be a surprise, but yes, he is,” said Ryan Garcia when asked if Canelo will walk him into the ring on Saturday night for the Luke fight.

Well, if Canelo requires getting some fame, he’ll get that by walking out Ryan tonight. You’d like to think that Canelo just wants to give Ryan some moral support, but who knows y Canelo is walking him out.

Garcia to face Gervonta Davis next

“I’m not mad at it, but we boxers have to make it know we are the serious fights,” said Ryan in talking about the Youtuber boxing matches and exhibition matches. 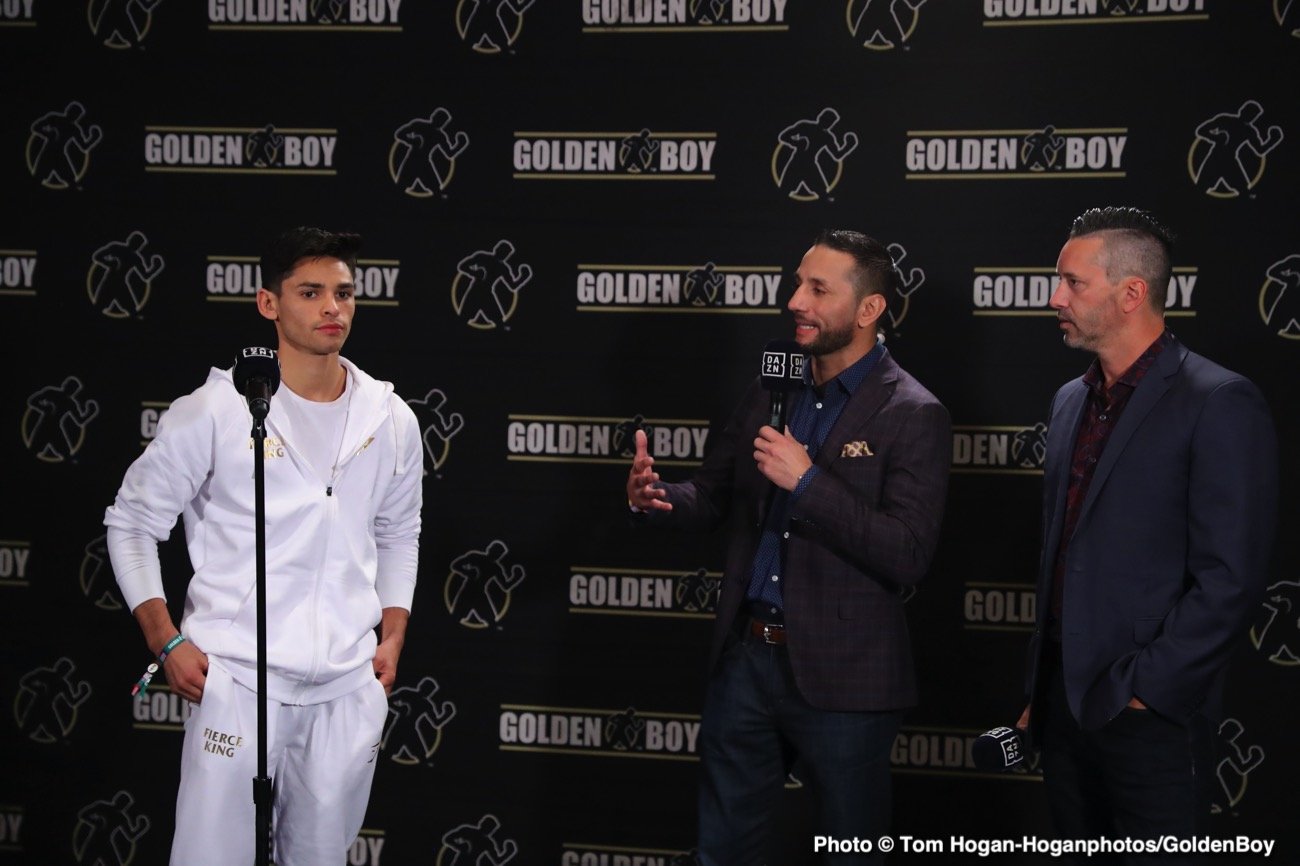 “We need to put on these mega-events, not just the celebrities, because we worked our whole life for this, so we need to do something about it. I

“I’m happy they’re making a lot of money. And I’m never mad at anyone’s success, but I do know we need to do something about it.

“I did everything in my control to make this fight happen, and I’m going to commit to Gervonta Davis next and see where it goes from there.

“I think I have the chance to be the most powerful person from upside and current value,” said Ryan. “I know I put the work in to do it. We’ll see what happens.

“This is part of my plan, and with a statement here, I can do big things. But first comes first, it’s Luke Campbell,” said Ryan.

Garcia is getting way ahead of himself by him, assuming that Gervonta Davis will fight him next. Just because Ryan keeps saying that Tank will be fighting him next, it doesn’t mean the fight will necessarily happen.

Not only does Ryan needs to defeat Campbell tonight, but he’ll also need Mayweather Promotions to give the green light for Tank to face him.

Considering how Mayweather Promotions has carefully matched Tank since he turned pro, it’s possible they won’t want to risk putting him in with Ryan.

“The biggest thing was when I took a look at Canelo, and if I dedicated myself 100% and worked as hard as I could every single day, what it could bring out of me because I’m naturally a very talented fighter,” said Ryan. 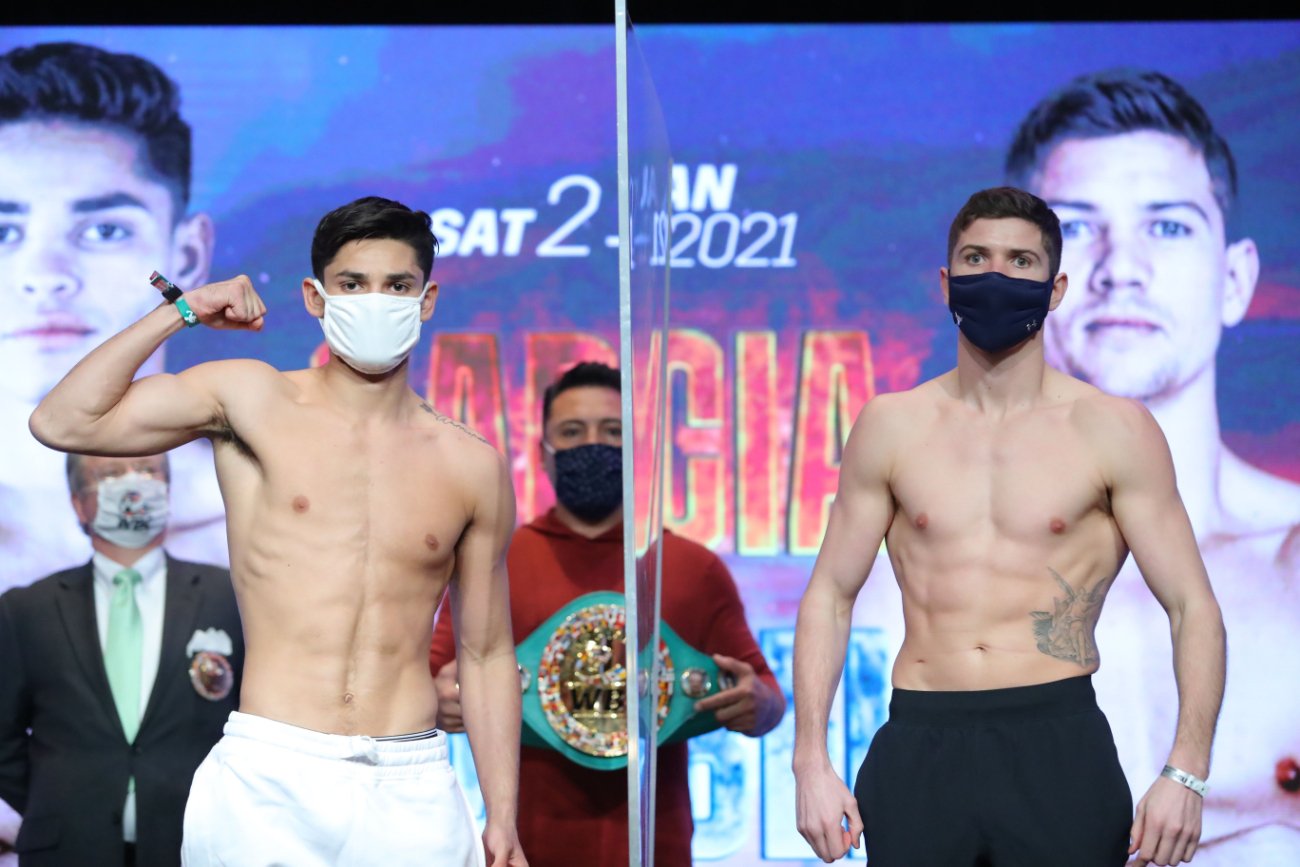 “The moment I started working hard like a legend Canelo, I’d never seen what that looks like because I’ve never been around that. I want to be the best.

“So the moment they gave me a glimpse of it, I never let it go. Now I’m at such a high level that, Luke Campbell, it sucks that it had to be you.

“Now it’s to prove how great I really am. I think as time goes by, I’ll get more respect. [Canelo] pulled me to the side and told me, ‘You’re probably the most gifted fighter I’ve seen in my life.‘

“I’m like, ‘Yo, what?’ I just feel like a regular guy, and I’m just taking my gifts to wherever I can take them. It’s a blessing, and I just that I can,” Ryan Garcia said.

Hopefully, Canelo isn’t planting ideas in Ryan’s head, making him think he’s better than he is.

If Ryan’s bum rushes Campbell, he’s not going to last long, especially with the way he’s always standing straight up with his head high in the air.

Instead of Canelo flattering Ryan 24/7, he needs to give him some useful advice about staying lower and moving his head.

It would be a good idea for Ryan not to get caught up with the compliments he receives from people, especially when you share the same gym with them.

It’s par for the court for fellow gym mates to complement other fighters who share the same gym and trainer. 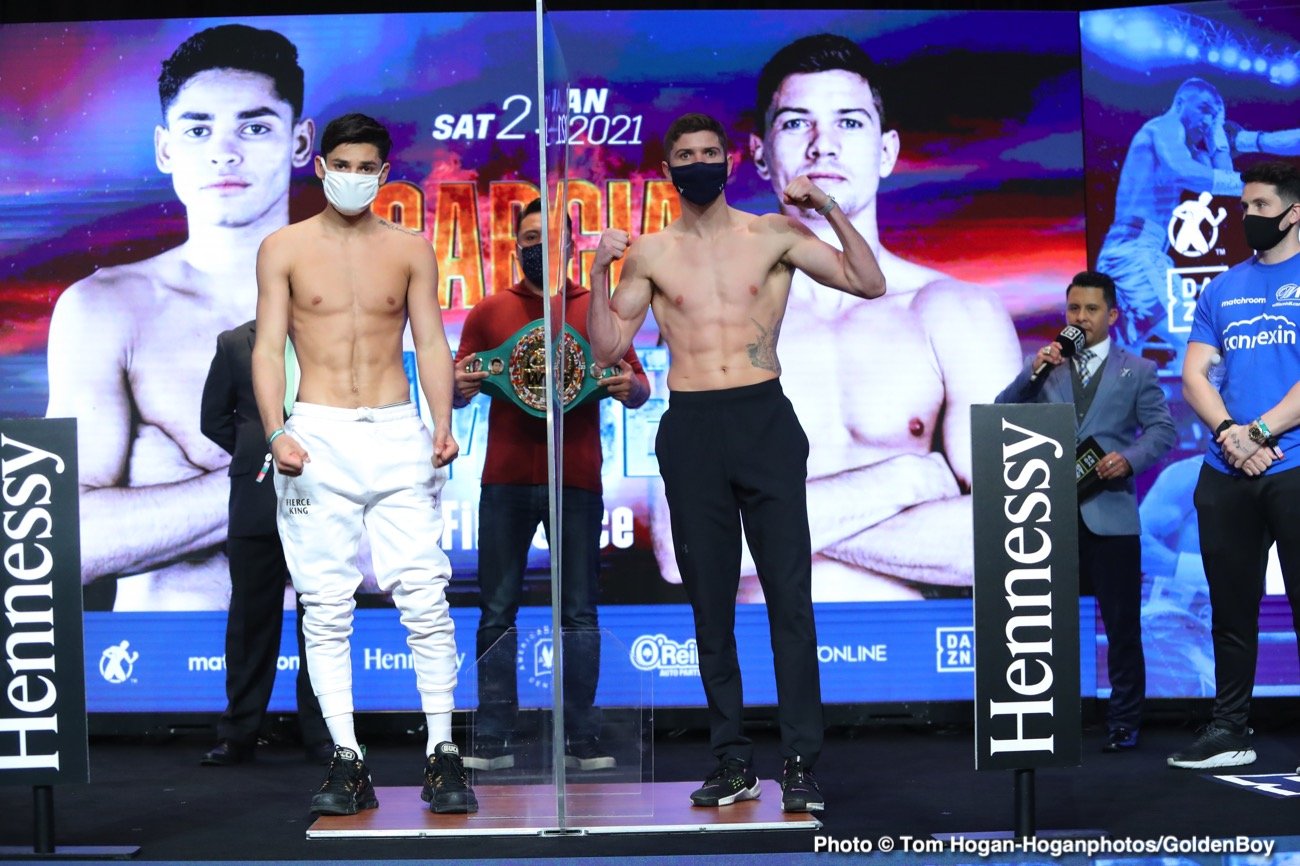 Campbell needs to keep his feet on the ground and not get a big ego because of a throwaway compliment that Canelo tossed to him.

I mean, if Ryan loses his head and rushes wildly at Campbell, thinking he’s going to knock him out, he could be sorry for it.