By Mark Eisner: Kell Brook (39-3, 27 KOs) fought valiantly for three rounds but was stopped in the fourth round by WBO welterweight champion Terence Crawford (37-0, 28 KOs) on Saturday in“The Bubble” at the MGM Grand in Las Vegas.

When the action resumed, Crawford hit Brook with another right hook to the side of the head. Crawford followed with a couple of additional shots that led to the fight being stopped.

Referee Tony Weeks jumped in way too soon stop the fight in the fourth round moments after he’d given Brook a standing eight count. Crawford landed a couple of shots with Brook against the ropes, and Weeks jumped in prematurely in stopping the fight.

You don’t like to see referees stopping the fight prematurely like that, especially when the co-feature bout between Joshua Franco and Andrew Moloney was a pure mess with the way it ended.

You’d like to have seen a good quality job by the referee for the Crawford vs. Brook fight, but we didn’t see that tonight with Weeks inserting himself into the equation too fast on two occasions.

“I was trying to gauge the distance. He had good distance,” Crawford said moments after the fight. “I was trying to find my rhythm in between getting my distance together. That’s why it was so competitive at first. I couldn’t get my shots off.

“Step forward, throw a little more punches but not too much. I caught him a couple of times,” said Crawford. “It was different fights and different years,” Crawford said when asked to comment on him stopping Brook quicker than Errol Spence Jr did in 2017. “Kell is a tremendous talent.

“I can’t take nothing away from him. He tried to take my title. He was in shape, he made the weight, so there was no excuse to be put on the table. He was coming off of three wins and not coming off of a loss. So he had his confidence up.

“He lost to the better man tonight,” Crawford said.

“Let me tell you something and I mean this. Spence and [Danny Garcia are fighting on December 5,” said Crawford’s Top Rank promoter Bob Arum. “If they really want to make a big pay-per-view, I’ll put Terence Crawford in with both of them, one at a time and he’d beat both of them the same night.

“Well, I’m looking to secure a Pacquiao fight,” said Crawford. “We were close to securing a Pacquiao fight prior to this fight, but being the COVID was getting out of hand, the fans couldn’t attend the fight. So we had to put a halt to it, and that’s when we decide to go with Kell Brook.

“He was the next available lone welterweight that was available to fight. So now we’re going to go back to the drawing board and try to revisit that fight with Manny Pacquiao,” said Crawford.

“The money was there, it had been committed,” said Arum on a fight between Pacquiao and Crawford. “It was a fight that was going to take place in a country in the Middle East, and then the minister of Health in that country said, ‘you can’t do it because I can’t guarantee that we’ll allow spectators,’ and it would have been this week. So he was right.

“Now they’ve called us and said if Terence is successful, we want to resume the talks and see if we can do it in the spring, either before or after Ramadan,” said Arum.

“Let’s go,” Crawford said when told, ‘It looks like we’re going to the Middle East.’

We probably won’t see a rematch between Crawford and Brook, but you argue that there should be one.

Earlier in the fight, Brook looked like he’d discovered the Fountain of Youth in the first three rounds with the way he was controlling the fight, and getting the better of the smaller, weaker 5’8″ Crawford, but things fell apart in the fourth.

Maybe it was age or the years of inactivity that cost Brook the fight. Whatever it was, this was not the same Kell Brook that fought bravely until the fifth round against middleweight champion Gennadiy Golovkin and lasted to the tenth against Errol Spence Jr in 2017.

Those guys hit harder than Crawford, and they hit Brook was bigger punches that he stood up to. Like I said, years of inactivity and weak opposition has eroded Brook’s game, leaving the empty shell that we saw tonight. Brook looked slow, show but still powerful.

Being as slow as he was, it was hard for Brook to land his punches on the quicker Crawford, who is still holding onto his prime despite being close to the same age. 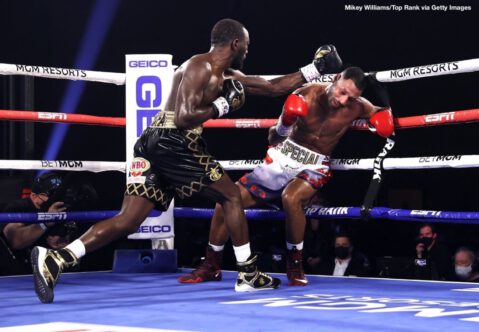 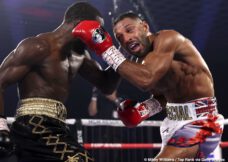 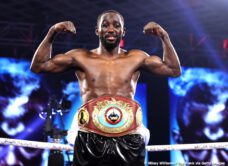