Terence Crawford vs. Kell Brook hasn’t been picked up by UK networks

By Charles Brun: Negotiations for the Terence Crawford vs. Kell Brook fight haven’t been able to be finalized because Top Rank promoter Bob Arum says he’s been unable to get any of the UK networks to step up to the plate and purchase the fight.

Arum is surprised and shocked that none of the British broadcasters have shown interest in picking up the fight between one of UK’s most popular fighters Brook (39-2, 27 KOs) and unbeaten talent WBO welterweight champion Crawford (36-0, 27 KOs) for November.

Bob is unsure why the UK networks have turned up their noses at the idea of putting on the Crawford-Brook fight, as he feels it’s a great match-up. One theory is the possibility that they may not like the 34-year-old Brook’s chances of winning that fight.

Arum expected the UK broadcasters to jump all over the Crawford vs. Brook fight and pick it up so they could show it to the British boxing fans, who require quality programming during the pandemic.

“It’s close to getting done,” said Arum to IFL TV about the Terence Crawford vs. Kell Brook fight. “What is the problem of getting it done? ESPN is putting up the money for the fight, a lot of money.

“Kell Brook is one of the top fighters in the UK. You CAN’T get a UK network to step up and buy that fight. What is wrong with the people over there? I don’t understand. Maybe I’m missing something,” said an exasperated Arum.

So there it is. The reason why Arum hasn’t been able to finalize the Crawford vs. Kell fight is that he can’t get one of the UK broadcasters to purchase the war. Why is that? Who the heck knows?

Are the UK networks afraid Brook will lose?

If the UK networks put the Crawford-Brook fight on in November, there’s a perfect chance that Brook is going to lose badly, and British boxing fans will be upset later. If you’re a network in the UK, you’ve got to be looking at the bottom line when you take a glance at the Crawford vs. Brook fight.

And if you extrapolate from there and predict an outcome for that match, it’s only apparent what’s going to happen to Brook. He’s messing with a hungry bear in Crawford, and it’s not expected to end well for Brook.

If you’re looking at the fight realistically, the result of Crawford-Brook is Kell getting knocked out or quitting when the going gets a little too harsh. That’s kind of what happened with Brook in his defeats against Gennady Golovkin and Errol Spence Jr.

Brook took a knee in the 11th in the Spence fight when he’d had enough. Against Golovkin, Brook stopped throwing punches suddenly in the 5th, forcing referee Marlon Wright to stop the contest. Technically, Brook didn’t quit against GGG, but when you stop throwing punches, it comes out to be the same thing.

Is it possible that the UK networks are looking for fights where there’s a good chance of one of their fighters to win?

If so, then it makes all the sense in the world for them not to be interested in picking up the Crawford vs. Brook fight in November. I mean, it doesn’t promise to be money well spent if you look the likely scenario of Brook getting bludgeoned into submission by the #1 pound-for-pound king Crawford.

If Brook had Errol Spence’s talent, then the chances of the UK networks picking up the fight between him and Crawford would likely increase exponentially, but he doesn’t have Errol’s talent. Brook is now just an older fighter who is arguably living off of the things he accomplished 2,000+ yesterdays ago.

You hate to say it, but Brook hasn’t done anything with his career since his controversial 12 round decision win over Shawn Porter in 2014. That was the zenith of Brook’s career in winning that contest using the old punch-and-grab technique, which was boring to watch.

NEWS:   Gervonta Davis is too small, Josh Taylor has no trouble with him - says Bob Arum

After that win over Porter in 2014, Brook failed to capitalize on being the IBF welterweight champion, as he chose to milk his title by defending the belt against Jo Jo Dan, Frankie Gavin, and Kevin Bizier. Why in the world did Brook choose to fight those guys? Charles Brun has no idea.

Those guys brought Brook nothing at all in terms of fame and attention from the boxing world. Oddly, Kell chose to fight those lower-level fringe contenders rather than aspiring for greatness by taking on the best. Did Brook doubt his own ability to beat the best? Maybe.

If Brook wanted to do something big, he should have been looking to fight Manny Pacquiao, Floyd Mayweather, Keith Thurman, Spence, or Porter after winning the IBF strap. Instead, we saw Brook waste his career momentum by smiling his belt against Gavin, Dan, and Bizier.

Was it Brook’s idea to fight those guys, or was it Hearn’s decision? It doesn’t matter now. What matters is that Brook made the wrong carer decisions, and he’s failed to become the star that he should already be.

As such, you can’t blame the UK broadcasters if they’re not interested in purchasing his fight with Crawford. If they don’t believe Brook has a shot at winning, then certainly doesn’t make sense to buy it.

Of course, if Brook wins the Crawford fight and the UK fans do not see it, it would be a missed opportunity by the networks in England. 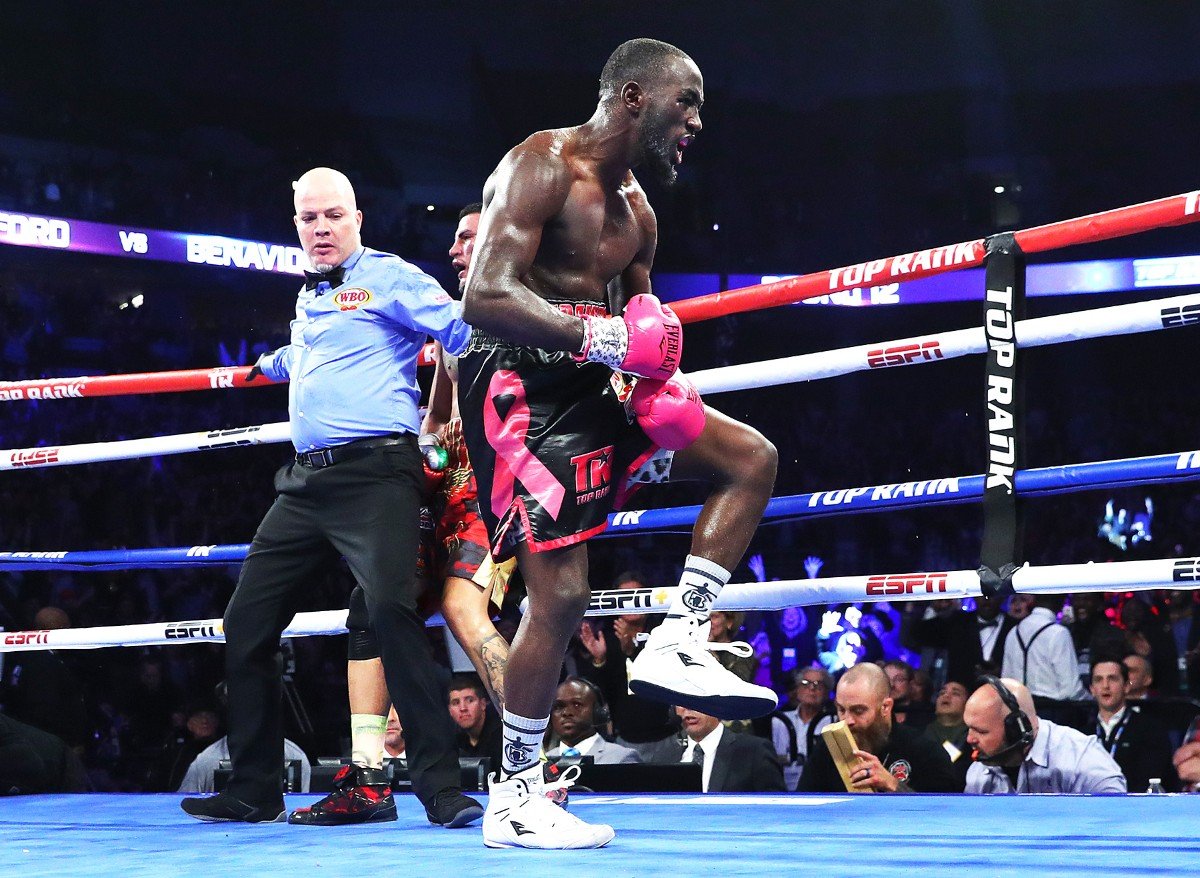 “These networks don’t give a crap about the boxing fans except to grub money,” Arum continued in railing about the UK broadcasters.

“Well, again, it’s up to you people that represent the boxing fans to make a fuss, because what’s happening now is a disgrace to boxing, especially in a country that has the best most rabid boxing fans, and that’s in the UK and Ireland,” Arum said.

For the British boxing fans asked to purchase the Oleksandr Usyk vs. Dereck Chisora and Alexander Povetkin vs. Dillian Whyte 2 fights on Sky Box office pay-per-view, it’s got to be mind-blowing that they’re not going to get a chance to see Brook and Crawford fight.

That’s arguably a far superior fight than the Whyte-Povetkin II or the Usyk vs. Chisora match. Heck, none of those guys are likely ever to win a heavyweight world title. Chisora is too old, Usyk too small, and Whyte too chinny.

Arum shouldn’t waste too much energy on shopping the Crawford vs. Brook fight to the UK networks. You have to believe that if they had any interest in showing that fight to the British fans, they would have already jumped on it by now.

The lack of interest kind of tells you where Brook sits in terms of popularity. If his name was Anthony Joshua, would he be getting ignored by the UK broadcasters?

Despite being a great fighter years ago, Brook has arguably undermined himself by stalling out his once-promising career after his back to back loses to Gennady Golovkin and Errol Spence in 2016 and 2017.

After those two defeats, Brook stopped fighting A-level guys, and he’s been going the tuneup route every since.

” To me, what’s happening is outrageous,” said About the UK networks not wanting to pick up his fight with Crawford and Kell.

“Give me a break. That’s just not fair. It’ll lead one day to the demise of the sport in the UK,” said Arum.

Man, Arum sounds like he’s hopping mad, doesn’t he? I don’t know why he’s all worked up, though. He needs to let the UK broadcasters put on the fights that they want.

If they don’t want to see, Brook walk the plank against Crawford, who can blame them? Brook’s chances of winning are so remote that it’s not even compelling broadcasting.

« Bob Arum goes off on Sky not showing Lomachenko vs. Teofimo in UK on Oct.17th

KSI says he’d beat Mike Tyson because of his age »