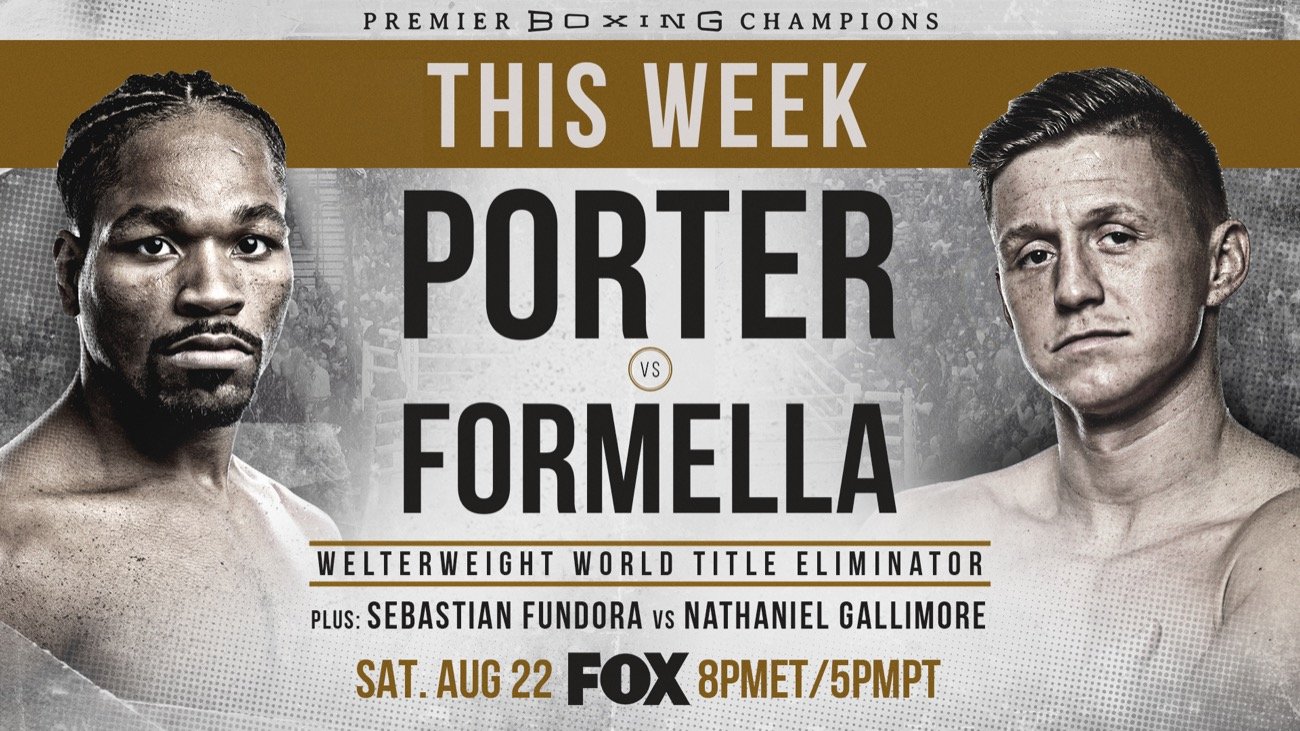 German contender Sebastian Formella relishes the opportunity he has in front of him in his U.S. debut as he prepares to face two-time welterweight champion “Showtime” Shawn Porter in a welterweight title eliminator headlining FOX PBC Fight Night and on FOX Deportes this Saturday, August 22 from Microsoft Theater in Los Angeles.

“I have always said that I want to compete with the best,” said Formella. “Now I have the chance. Even though I’m coming from Germany and the U.S. fans aren’t as familiar with me, I’m ready to do whatever it takes to win. I can’t wait to test myself against a welterweight superstar like Shawn Porter.”

For the 33-year-old Formella, challenges are nothing new. He debuted as a pro in 2014, already 26 years old, but quickly showed his mettle, winning a German middleweight title in just his sixth pro fight. After moving down into the welterweight division full time in 2018, he has reeled off five straight wins against opponents with a combined record of 95-8-1.

“Everyone who knows me, knows that I will face any opponent,” said Formella. “When my promoter called and offered me the fight, I immediately said yes – without knowing the details. I know what I can do and I’m willing to prove it against whoever is available. I am not a guy who gives up or avoids anything.”

Heading into this fight, Formella has been on a training camp world tour, participating in training camp in his native Germany, before two weeks of sparring in Istanbul. Eventually he arrived in the U.S., where he sparred with top welterweight Yordenis Ugas, who faced Porter in dropping a close title fight last March on FOX.

“One of the reasons this opportunity came at the right time is because I had been in training in Germany since June,” said Formella. “Since then, we had two weeks of sparring in Istanbul. We had rough conditions there and that made it all the better for training so I feel prepared for whatever is going to happen in the ring.

“One of the sparring partners in Istanbul was my promotional stablemate Volkan Gökcek. It was optimal work day in and day out. Once we got to the U.S., I sparred with Yordenis Ugas in Las Vegas and I know that experience can only help me on fight night.”

Formella will have a tall task on fight night against the two-time 147-pound titlist Porter, who’s career resume is littered with big name opponents such as Errol Spence, Jr., Keith Thurman and Danny Garcia, amongst many others. Porter is defined by his rough and tumble, all-action style that ensures nobody is in for any easy night against him.

“Porter makes a lot of pressure, he can bridge the distance very well with his fast movements and he is very strong on the inside,” said Formella. “You always have to be careful and concentrated. You must not let him drag you into his fighting style. We’ve analyzed Porter, and we know it’s going to be tough. But it’s boxing and the nice thing about our sport is that a lot of things can happen that you don’t expect. We have a tactic set up and I’m going to throw everything at him to get the win.”

In his corner, his promoter Erol Ceylan has drawn a direct line between Formella’s underdog status against Porter and Formella’s similar status when he triumphed over Thulani Mbenge, who had come into that fight off of victories over Miguel Vazquez and Diego Chaves.

Formella still has a daytime job

Sebastian Formella is not your everyday boxer. Especially not if you consider the fact that the 33-year old from Hamburg, Germany carries world championship gold around his waist. When Formella is not busy working in the gym, he is controlling container bridges at the port of Hamburg. In other words: apart from being a professional boxer he still has a daytime job that pays his bills. Even when he won the IBO World Title in 2019 he got back to work less than 48 hours later.

It doesn‘t get more humbling than that, but it’s something that might give him an edge over a lot of his opponents. Formella knows that without hard work and dedication everything means nothing in the end. In 2017 he found the perfect partner to put his laser focus to use, when he signed a contract with EC Boxing in Hamburg. Alongside Erol Ceylan „Hafen-Basti“ build himself up, selling out arenas with several thousand people in his hometown.

Then, in July of 2019, he got a shot at then IBO Champion Tulani Mbenge from South Africa. The German homecrowd pushed Formella all the way to the end of this 12 round affair. A couple of minutes later legendary ring announcer Jimmy Lennon Jr. declared him the unanimous winner and therefore the new world champion. Without this victory Formella wouldn’t be where he is today. Without this a big fight on a big stage would never come to fruition.

But now dreams have become reality. On August 22nd Formella will take on non-other than former two time world champion „Showtime“ Shawn Porter. It‘s by far the toughest challenge of his career, but the German is not visiting Los Angeles to lose: „I have great amounts of respect for Shawn Porter, who is a world-class fighter. But I’ll come prepared. Me and my team have studied him closely“, Formella explains.

In preparation Formella held training camps in both Istanbul and Las Vegas. At the gym of famous coach Ismael Salas he got around to spar former Porter-foe Yordenis Ugas. No stone was left unturned for the biggest fight in Formella’s boxing career.

« Errol Spence Jr will be ready for Danny Garcia on Nov.21