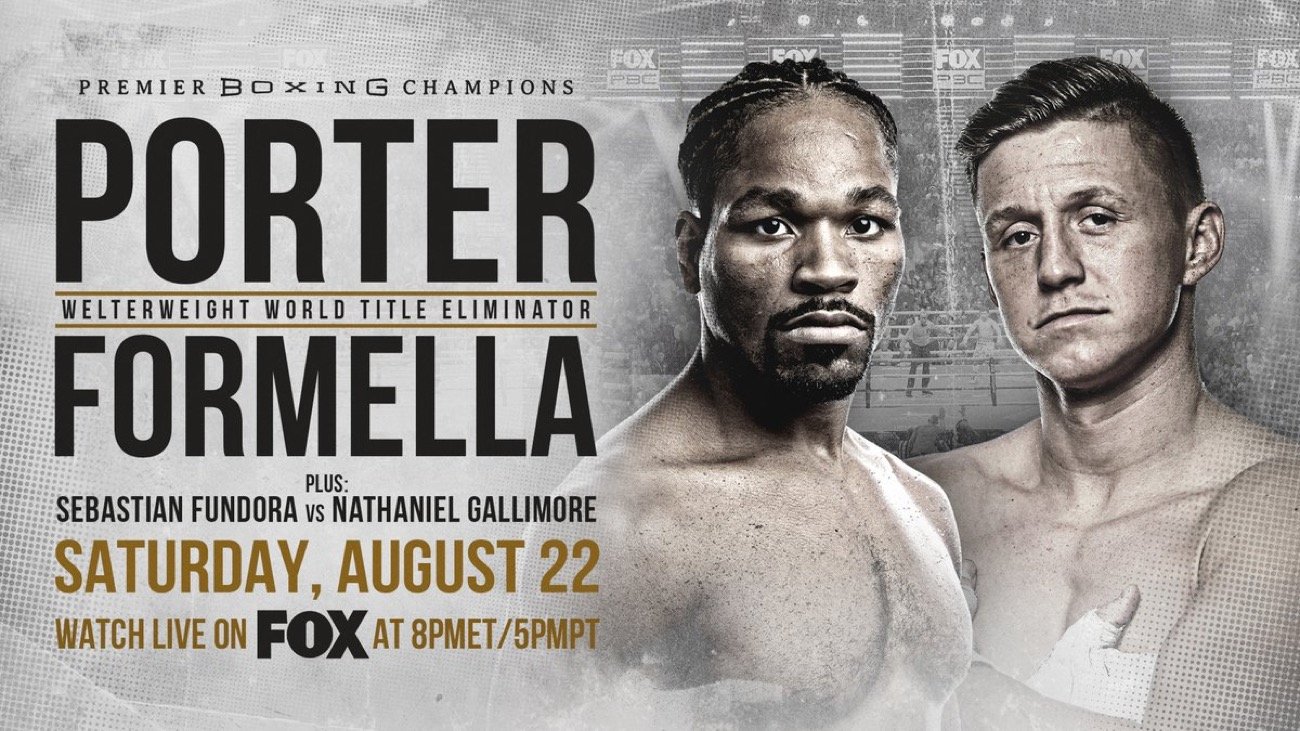 Two-time welterweight champion “Showtime” Shawn Porter and unbeaten German contender Sebastian Formella previewed their welterweight title eliminator on an international media conference call. Porter and Formella fight this Saturday on August 22 from the Microsoft Theater in Los Angeles. The contest will be shown on Fox Sports. 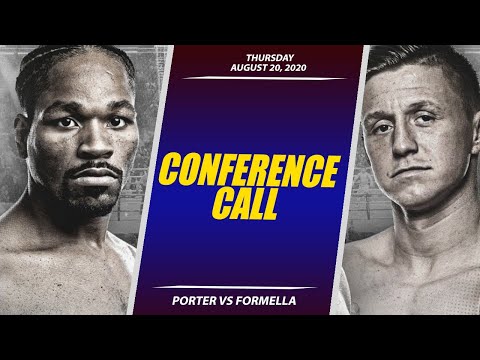 FOX PBC Fight Night begins at 8 p.m. ET/5 p.m. PT and will also see an intriguing rising prospect, Joey Spencer, in a six-round middleweight unique attraction against Shawn West. All programming can be live-streamed in English and Spanish on the new FOX Sports app. FOX Deportes offers delayed coverage of all FOX and FS1 programming beginning at 10:00 p.m. ET.

TGB Promotions and Shawn Porter Promotions will promote the Porter vs. Formella event. He will take place without fans in attendance at the Microsoft Theater, an AEG venue in downtown Los Angeles.

Here is what the conference call participants had to say Thursday:

“This fight for me is a matter of getting boxing back going. We’ve had a couple of big fights, but I do think that boxing gets kicked off this Saturday night with ‘Showtime’ Shawn Porter and Sebastian Formella.

“We’ve trained hard and endured the conditions that everyone has had to endure and made the most of it. We started training in my father’s backyard in April, and now we’re back up and running.

“We’ve done everything we were able to do against any other fighter in preparation for this fight.

“I know that Formella is a boxer who likes to move and use the outside and box. We’re prepared to take the fight to him. We’re going to be smart and tactical, but aggressive as always. We’re going to go in there shining, looking great, and make a statement to the world that boxing and Shawn Porter are still here.

“I think Formella has more of an amateur rhythm because he’s not going to fight in the middle of the ring and slip and counter. He has a very well developed style of fighting that has helped him get to where he is.

“I’m different from most fighters. It’s a trend in boxing where warriors look past opponents, but I learned a long time ago that you have to focus on what’s in front of you and make the most of it. In my dad’s mind, we did even more for this fight than we did in getting prepared for Errol Spence, Jr.

“The plan is to get back into a world title fight. I don’t know precisely when that plan will come together, but I’ll be ready. I’m keeping my eye on the Errol Spence, Jr. vs. Danny Garcia fight as a potential future opponent, but also as a fan of the sport.

“My dad is all about hard work, commitment, and integrity. We get that in every camp and preparation for every fight, no matter who it is. Our mindset after the battle with Spence is the same as it’s always been, that’s to win. That’s what we’re going to do.

“We’ve been in a lot of uncomfortable positions inside the ring and training, and that’s what helps me get better. I’m comfortable in discomfort. That’s what I thrive off of. I’m always willing and usually able to make the adjustments to adapt to these situations.

“One thing we worked on in this fight, without even knowing we were facing Formella, is our power. We did our strength program longer than we usually would, and I know that the power is going to show up on Saturday night.

“I have friends in Germany who were able to give me information on Formella. We got all the tape and the information needed. We knew who he was training with, and when he came to the U.S., I’ve done everything I need to do to be ready for this fighter.”

“I’m happy to have this chance to fight one of the best welterweight boxers in the world. I trained very hard, and I’m very excited to get into the ring.

“We made plans A, B, and C because Porter is a strong fighter who comes forward and attacks the body and head. He has heavy hands, so we looked at his mistakes and made a plan to box him and show off our style. I have good footwork and can move around. I think it will be a new style for him to face. I have the skills to make life very difficult in the ring for Shawn Porter.

“I’m a fighter who moves very well, and I have a good defense. I know how to keep my distance. I’m not the hardest hitter, but I’m a brilliant fighter. I make my opponent have to think and make it very difficult for them. Fast feet and fast hands will be the key.

“My jab is going to be very important. Porter is going to attack me very hard and fight on the inside. I have to make sure I don’t fight inside with Porter too much. I’m going to keep the distance.

“We sparred with Yordenis Ugas for a week, but we also worked with other strong fighters who trained me to fight on the inside. All of the work put me in a high position. I learned a lot in that week with Ugas, and I will show it in the fight.

“It makes me very sad that we can’t have fans in the stadium. The atmosphere in the U.S. for big fights is so crazy and beautiful. It isn’t charming, but I think it will help me because it’s something new for Shawn and not what he’s used to.

“My movement is going to be the most important, but also my mindset. I say all the time, a sharp mind, and a stable life. I’m going to be something new for him, and I’m going to make it an exciting fight for everybody watching.

“Shawn Porter is a complete fighter, but we have a plan to beat him, and that’s what we will do on Saturday. I must get this win and open the door for more big fights. Welterweight is a strong division in the U.S., and I have to do everything I can to earn more opportunities.”

“It’s nice to be here in this position and back fighting in my home state of California. I’m very grateful for the opportunity. Come Saturday night; I’m ready to make a statement.

“I won’t have any problem on the scales tomorrow. I walk around at this weight, and we were prepared and ready for the sizes before we even came to the venue.

“Every fight is different, and every camp is different, so we worked on different things. We’ll see what Gallimore brings on Saturday and take what we learned in the field into the ring.

“My life is camp. I lived the quarantine life already. My gym is in my backyard, so I didn’t have to go anywhere. We just had to bring in sparring, and we were ready.

“I fight; however, I feel comfortable. Inside or outside. However, it feels best to me in the training camp, that’s what I bring into the ring. I understand why people say that I need to work on my jab, but a lot of those people haven’t been in the ring. I listen to my trainer and my team, and do what makes sense to me.

“My dad is good at finding sparring partners, so that wasn’t a problem for me. This was just like any other camp. I couldn’t say there were any problems.

“I fight with the Mexican style. That’s the side of me that I’m representing in the ring. So that’s what I’m looking to show off every time.

“This an opportunity to face another elite fighter so that a win will get me closer to the title. The final decision will be up to my team, but I feel like I’ll be ready soon. I think this is the toughest competition of my career. Getting a win will be a big step forward.”

“I’m glad to be back in the ring. I’m entirely focused, again with my original coach George Hernandez and ready to show the world what I have.

“Fundora is a good fighter, but I know that he hasn’t faced anyone like me. It’s going to be different facing me. Whatever he has prepared for, it won’t be enough when he meets me.

“The experience is something that I have over him. But I know that in my last couple of fights I wasn’t really near my best. I know what I bring to the table, and I’m going to execute and do what I do best on Saturday.

“I wasn’t fighting in a way that I was comfortable within the Erickson Lubin fight. I was overthinking. I have to fight my fight and be me. I know what I have to do.

“This is the first step toward a world title. I have to take care of Fundora; then, the gates are going to be wide open after that.

“You always have to study your fights and see the positives and negatives. I know what was missing, and I’ve worked with my trainer to fix those mistakes. That makes me very confident in what I need to do Saturday night.

“It’s not Fundora’s height that I’m worried about. I’ve just been working with the best southpaws possible to get the angles right. I’ve worked hard to be prepared for anything.

“I’m a different type of animal in the ring. I’m not a typical fighter. I’m ready to show that Saturday night. I feel like I’m the better fighter overall. It’s nothing against him; I believe that I’m better.”

“This is going to be another terrific night of boxing on FOX and FOX Deportes from our bubble at Microsoft Theater in Los Angeles. We have the two-time welterweight champion, Shawn Porter, with his fan-friendly style going up against the unbeaten Sebastian Formella in an IBF title eliminator.

“Sebastian and his team were delighted to get the call so he can prove himself against one of the best in the world. We know what Shawn is coming into the ring with after that terrific ‘Fight of the Year’ in September against Errol Spence, Jr., where Shawn’s stock went up that night. It’s going to be great to have Shawn back in the ring in a big fight.

“We also have the exciting rising prospect Joey Spencer on the broadcast, plus a fight I’ve been looking forward to in this showdown between Sebastian Fundora and Nathaniel Gallimore.

Nate has been asking us for months for a fight like this. He wants to get back in the ring and prove himself again. Fundora brings the action again and again, and it should combine for something great.”

Maurice Hooker vs. Josesito Lopez possible for Spence vs. Garcia card on Nov.21 »